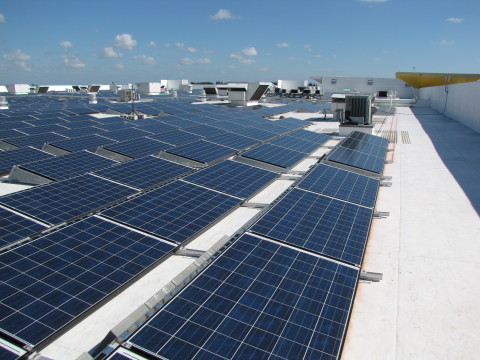 In a new briefing for its Grid Edge Customer Network members, GTM Research sheds new light on the current commercial solar market in the US – releasing new information on the sector’s biggest players.

When it comes to ownership structure, the report notes that a cash purchase can serve as the fastest and most streamlined approach when it comes to reeling in on-site solar with minimal expense and interest rates. In 2015, 65% of commercial installations were organised through third-party financing – a trend that is slated to increase moving forward.

When referencing solar adoption data provided by the Solar Energy Industries Association (SEIA), GTM notes that large corporations favor either direct or third-party ownership models, with few companies settling on a combination of both.

Companies that own their PV projects – such as IKEA and Johnson & Johnson – often opt to self-finance and directly own on-site solar.

While commercial PV turnkey development has seen average cost reductions of over 60% over the last five years, the market still has its set of hurdles. Unlike other solar sectors such as residential, commercial PV financiers are forced to deal with larger transaction costs and lower potential liquidity – leading to higher costs of capital.

As a result, the commercial market in the US is largely fragmented when it comes to developers, with a multitude of installers operating in each state. In 2015, SolarCity led all installers with 14% of commercial solar installations, followed by SunPower (7%) and Borrego Solar Systems (5%).

Looking ahead, the recently extended federal solar Investment Tax Credit is expected to help spur market growth in yearly commercial PV installations by 294% in 2020 over 2015 figures. 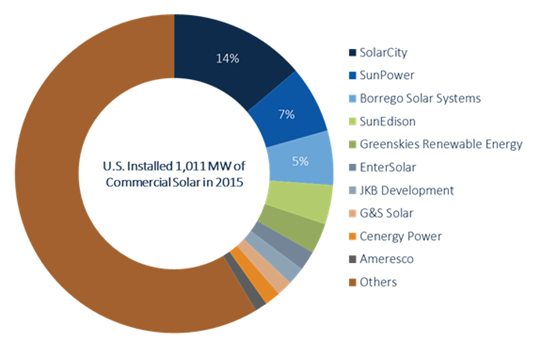 February 25, 2021
US residential solar installer Sunnova reported fourth quarter revenue down 24% from the prior quarter, while posting full-year revenue growth of 22%, year-on-year.

February 25, 2021
Technologies to help tackle grid congestion could double the volume of solar and wind deployed by 2025, according to a new study.