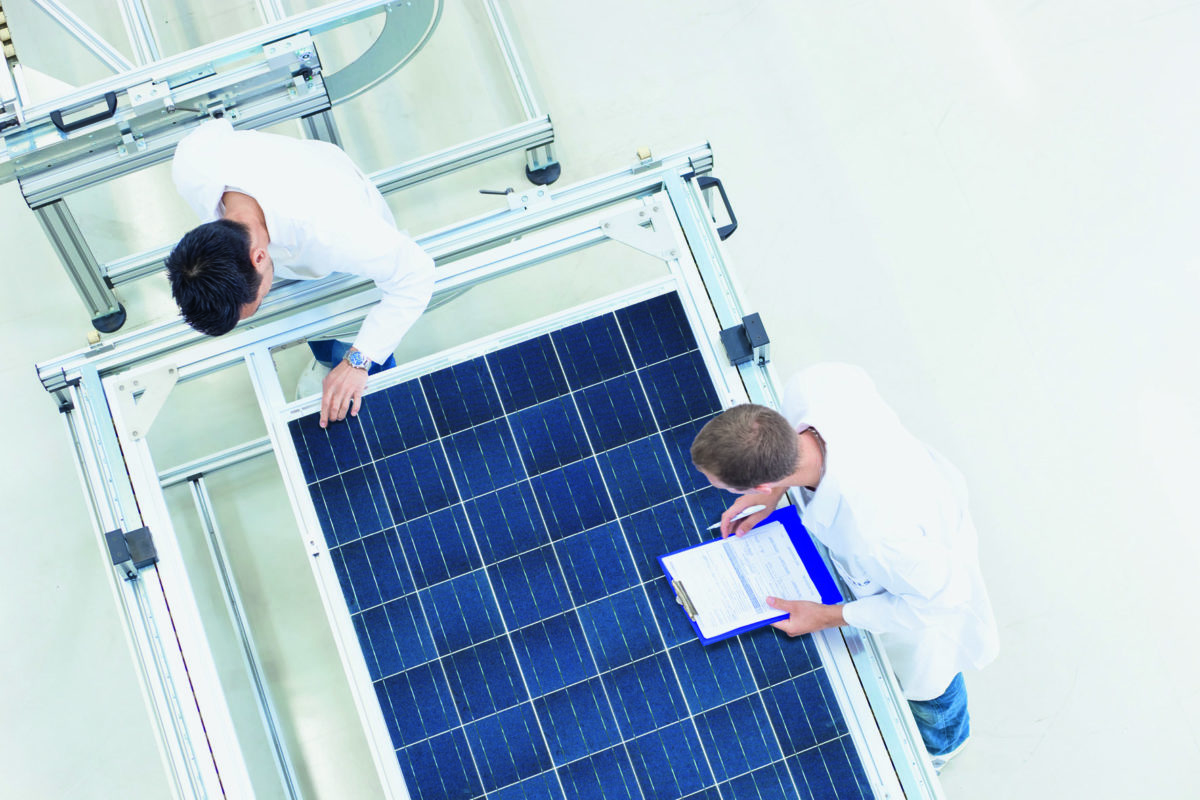 ‘Silicon Module Super League’ (SMSL) member Hanwha Q CELLS may have reported record PV module shipments and revenue for 2016 but the underlying strategy for 2017 is cash preservation after its gross profit and margins collapsed in the fourth quarter of 2016.

Hanwha Q CELLS slashed capital expenditures to around US$50 million for 2017, down from US$137.7 million in 2016, with no new in-house capacity expansions planned for the year. 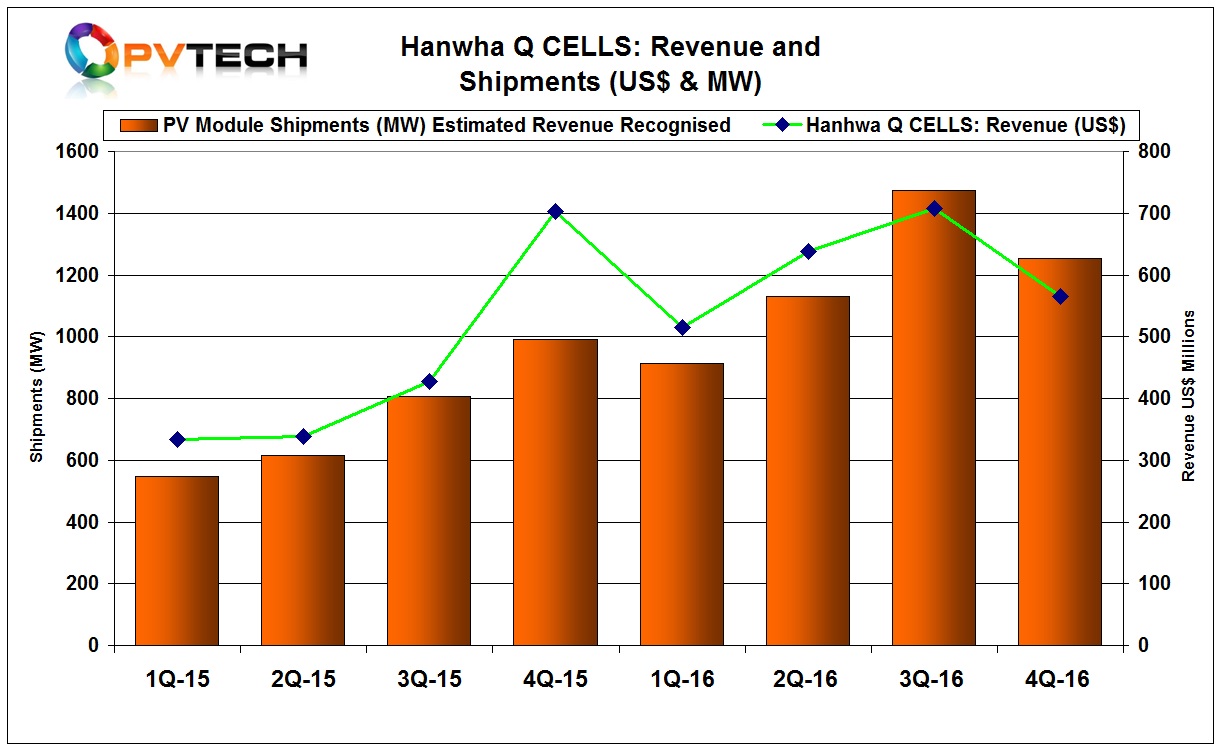 In contrast, Hanwha Q CELLS guided only revenue for the first quarter as it has stopped guiding shipments and shipments on a regional basis last year. The company said it expects net revenue to be in the range of US$410 to US$430 million. JA Solar does not guide quarterly revenue.

However, Hanwha Q CELLS reported first quarter 2016 revenue of US$514.9 million on module shipments of 912MW. With the company experiencing more than a 20% decline in ASP’s in 2016, PV Tech estimates lower module shipments for Hanwha Q CELLS in the first quarter of 2017. This indicates, based on full-year shipment guidance that quarterly shipment run rates would need to be in the range of 1,375MW and so shipments would seem to be heavily loaded to the second half of the year.

With respect to JA Solar, quarterly module run rates need to be 1,350MW to meet PV Tech’s annual shipment estimates, indicating shipments are loaded slightly less to the second half of 2017. 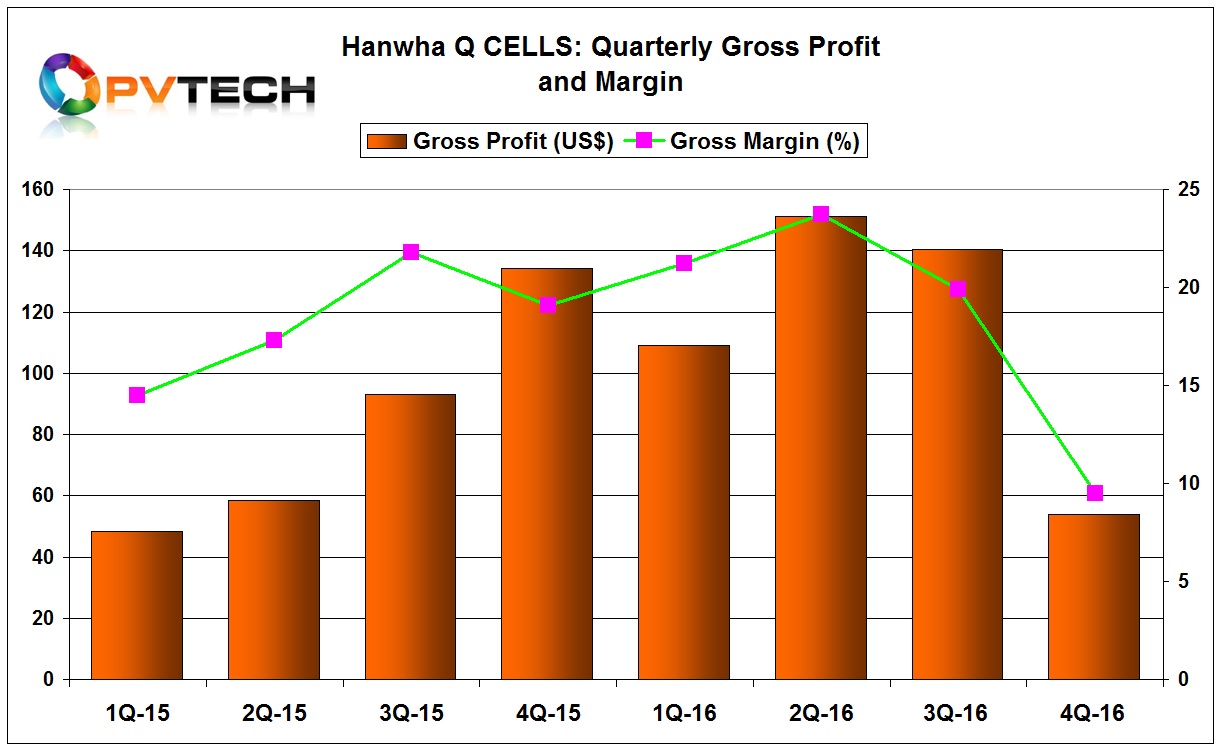 Clearly, both companies are being impacted by declining module ASP’s but Hanwha Q CELLS impact seem far greater on these profitability metrics and the company posting a loss in the quarter.

However, several other SMSL’s, including JA Solar and JinkoSolar are also adding more P-type multi-PERC and P-type mono-PERC production in 2017.

Concern remains that that ASP erosion in 2017 would impact Hanwha Q CELLS ability to remain profitable. According to an investor report from ROTH Capital analyst, Philip Shen, the company had a blended module ASP of US$0.44/W in the fourth quarter of 2016, while its manufacturing cost structure was estimated to be US$0.40/W.

Mr. Seong-woo Nam, Chairman and CEO of Hanwha Q CELLS, remarked “We achieved record high total module shipment and revenue in the full year 2016 while establishing solid market positioning in key strategic markets in both mature and emerging countries. In 2016, we have also successfully ramped up a world leading PERC cell in-house production capability, now having produced over 3 GW1 of both mono and multi PERC cells since 2015, positioning Hanwha Q CELLS as a global leader in production of advanced cells.”

11 October 2022
PV CellTech Extra will be held as a series of live webinars and on-demand sessions on 11-13 October 2022. We'll be taking a slightly further forward-looking view at the technologies and roadmaps for new cell architectures set to dominate mass production during 2023-2025 with special emphasis on the potential timelines for technologies beyond the single-junction cell design, including perovskite and hybrid concepts.
c-si manufacturing, hanwha q cells, monocrystalline wafer, perc, pv modules, solar cell