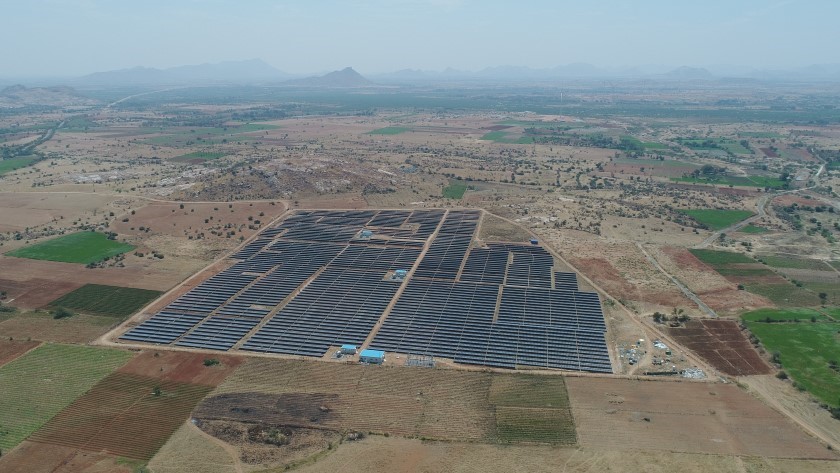 An Indian state-directed agency has launched three huge tenders across the country with various combinations of solar, energy storage, wind and hybrid concepts, in what the India Energy Storage Alliance has described as 'the long-awaited step'.

The Request for Selection (RfS) documents for all three tenders will be released on 8 March.

Vinay Rustagi, managing director of the consultancy firm, Bridge to India, told PV Tech that at this stage, SECI is just issuing the notices and the tender documents are clearly not ready yet. It is likely that the rush is to circumvent the two-month policy hiatus that usually precedes a general election – likely to start from 5 March in this case.

Auction and tender activity has been frantic at the end of last year through to the present day and the backlog of solar tenders continues to pile up, even with capacity awards in Gujarat, Maharashtra and pan-India recently.

Last January, Rustagi warned that the tender flurry was over-ambitious, noting that of the 50GW of clean energy tenders last year, there were only around 20GW of allocations, as per the table below: 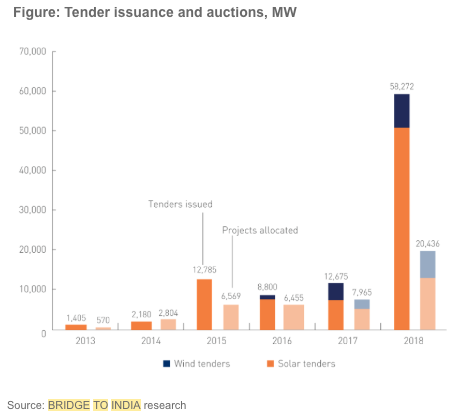 Today, Rustagi said that nothing has fundamentally changed in the market and despite a number of auctions in the last two months, the field of winning bidders is “getting narrower and narrower”.

He added: “All the second and third-tier developers are struggling to raise money. It’s a pretty challenging environment, because of all the negative developments in the last year, whether on the tax front, cost of financing, interest rates, rupee rate etc.”

While all the announcements are likely to be part of a plan to fast-track approval from MNRE since the unique new tender parameters will have taken time to concoct, Rustagi noted: “The fact remains that India doesn’t need as much renewable power as the tender programme of the government suggests, and we've seen so many tenders being cancelled or undersubscribed.

“One hopes that quality of these schemes would not be compromised in the last minute rush.”

Yesterday, SECI even announced plans to tender for 1GW of solar in the mountainous and forest-covered Northeastern states and Sikkim, adding even more capacity to the pot.

On the plus side, the latest tenders also compound the long-awaited rise of energy storage tendering in India. Besides this week's issuances, seven tenders with a total storage capacity of 84MWh combined with 78MW of solar PV had been issued in the last 12 months, according to Bridge to India figures.

Rustagi described the new 1.2GW solar / 3,600MWh tender as “a huge step up”, given that clearly, the cost of power will be very high. However, it is difficult to comment without the full tender details on off-take and ceiling tariffs.

He also said it would be interesting to see what kind of government support may be added, such as viability gap funding (VGF), because Bridge to India believes that making the distribution companies (Discoms) bear the extra costs would be unrealistic.

Solar and storage tenders over the last year have been issued by SECI, NTPC and NLC mostly in remote areas of Ladakh, Lakshadweep, Himachal Pradesh and Andaman & Nicobar Islands. There have also been 760MW of new wind-solar hybrid tenders in Andhra Pradesh with the option of adding storage.

“As your readers know, the Indian government is on verge of launching the National Energy Storage Mission (NESM). Demand creation is a key component of the national energy storage mission, and the ultimate goal is to make India a global hub for R&D and manufacturing of advanced energy storage technologies. Since the announcement of NESM by Hon. prime minister Shri. Narendra Modi on 2 October 2018, various government agencies have already released 5+ request for proposals (RfPs) for RE integration. This includes a tender for 20MW of floating solar PV projects with 60MWh Battery Energy Storage System (BESS) by SECI on a turnkey basis in the union territory of Lakshadweep for multiple locations. Another large tender by a transmission utility has called for 400MW for 3-8 Hr of storage for RE integration which would also create a 1.2 to 3.2 GWh RfP for storage.

The IESA team is in touch with SECI and MNRE to get more details on the RfS for 1.2GW solar combined with 3,600MWh of storage. CEA and CERC have already recommended inclusion of energy storage with solar and wind hybrids, so we also anticipate that in addition to the 3.6GWH storage project, other hybrid tenders will also have an opportunity for storage technologies to be included.

This is the big and long-awaited step and we can see that in the last 4 months the government’s seriousness towards the sector after some unfortunate cancellations of tenders for over 100MWh in 2017-18. IESA had strongly protested the cancellations and delays in implementation of the storage projects, and we are hopeful that this time, the government will prioritize these projects and see them through to implementation.

We are also seeing strong leadership from private companies such as AES and Mitsubishi, which deployed the 1st 10MWh stationary energy storage in New Delhi earlier this month.”