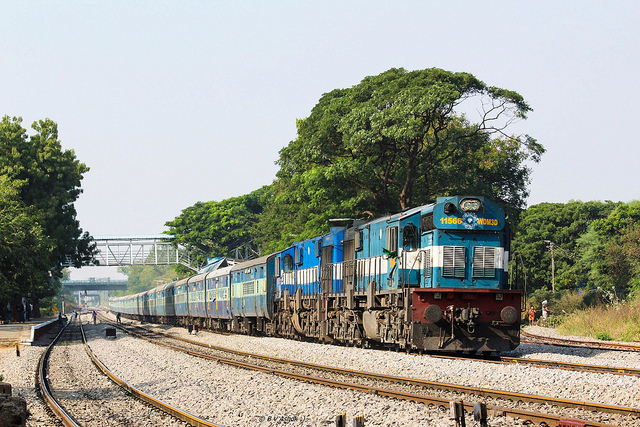 Indian Railways, one of the world's largest employers, is planning 1GW of solar PV and 200MW of wind power by 2021-22 across its Zonal Railways and Production Units.

The huge power guzzler will install 500MW across rooftops of its railway buildings, complemented with another 500MW of ground-mount PV.

The company has already installed 99MW of solar and 103MW of wind power as of 31 October 2019, minister of Railways and Commerce & Industry Piyush Goyal told MPs at Rajya Sabha last year.

The South Central Railway has already made progress with energy conservation and has installed solar at stations, service buildings and other locations, which is due to save power costs for the Railways.

The new Nandyal to Yerraguntla railway line section in Guntakal Division, operating in the southeastern state of Andhra Pradesh since 2016, has also been declared as the first solar section in South Central Railway. This line was built to connect remote areas through the train network and it now has solar installed on all eight stations: Madduru, Banaganapalle, Koilakuntla, Sanjamala, Nossam, S.Uppalapadu, Jammalamadugu and Proddutur.

A total of 37kWp of off-grid solar with 250/125Wp modules have been installed at each of these eight stations, along with inverters and 12V 150 AH Battery banks. Anticipated savings in terms of revenue lie around INR500,000 (US$7,060) each year.

These stations follow in the footsteps of 16 other stations using solar or wind power as the key power supply that have already been declared as Green Railway stations across Indian Railways' remit.

Indian Railways has plans to arguably become the world's first fully green-powered rail network within the next decade. Firstly, the government is focusing on 100% electrification of its rail tracks to move away from diesel before focusing fully on the renewable energy transition. This transition will be partly led by a push to install solar on remote and unused lands owned by the Railways. Much of this may also make use of domestically sourced modules.