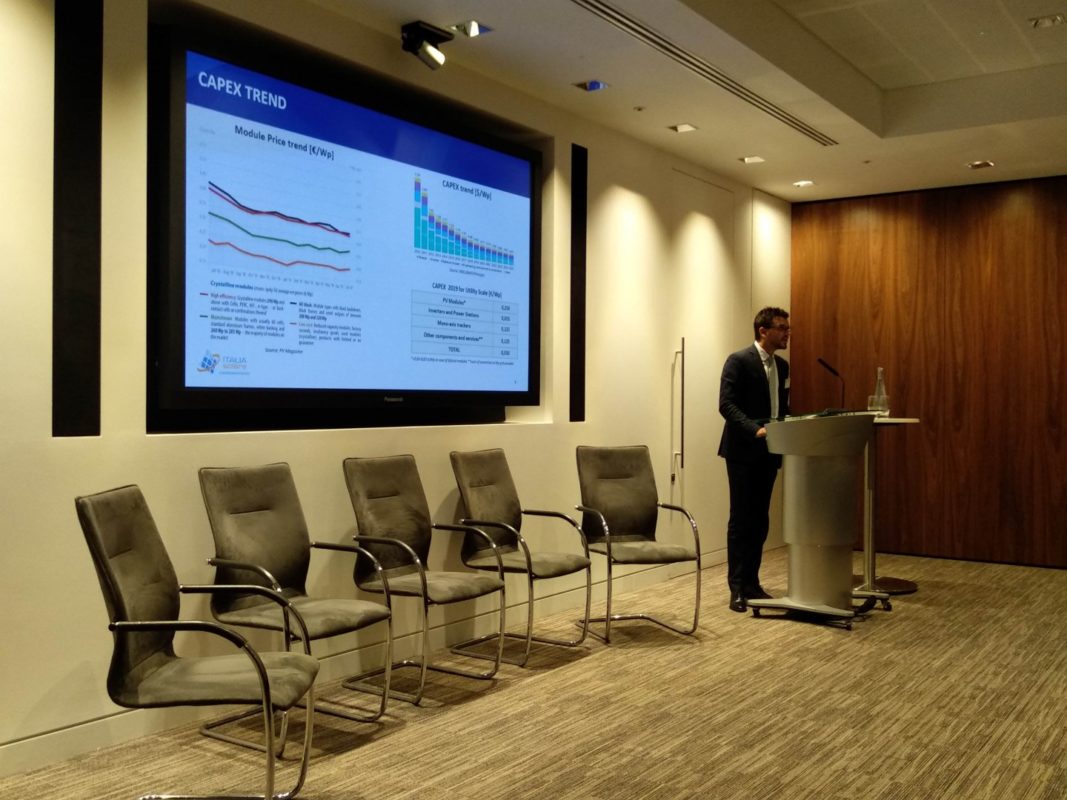 The colossal solar boom Italy wants to drive in a decade could lie beyond reach if developers do not act to embrace energy storage more decisively, industry players have argued at a recent event.

A recent session by association Italia Solare examined whether the country that used feed-in tariffs (FiTs) in the 2000s to build Europe’s second top PV market can now reverse years of standstill, using new contracts-for-difference auctions to boost installed capacity from 20GW-plus to 55GW in a decade.

Giles Clark, who chairs a working group on large-scale solar at UK PV trade body STA, did not appear optimistic on Italy’s utility-scale prospects. “As an investor, I would not look at [Italian] large ground-mounted projects except under very special circumstances,” he told the London event. “People who will build large will be subject to the whims of markets, plus permitting rules in farming land.”

Clark seemed, however, more bullish on the economics of energy storage, which he described as the “elephant in the room”. “We’ve hardly spoken about the subject and yet people who are able to deploy storage will make money,” he remarked. “Batteries will help stabilise prices and the big question for Italian PV owners is – do you own the battery or do you rely on the market?”

The fight over energy storage subsidies

The belief in energy storage’s central role in the Italian solar transition extended to other speakers. Asked to anticipate whether the country’s PV future will be subsidised or merchant, a five-person panel coincided in predicting the latter, with the caveat that it would make sense to continue subsidising storage even when solar is not.

The need to support nascent energy storage systems was echoed by the event organisers. “If some subsidies need to be given, we think it’s much better to give them storage rather than solar investments,” said Italia Solare’s CEO Paolo Rocco Viscontini. “As an association we will ask again for more incentives to storage – that will be absolutely essential.”

For Francesco Girardi, senior director at investor advisory Bluefield Services, the storage approach will be essential to Italian solar as it braces for new merchant phase. “We need to make sure solar farms are prepared for the future and this means storage, it means grid ancillary services,” he argued. “Our plants need to be compatible with the grid.”

Seated next to Girardi, Oliver Ciancio of energy trader DXT Commodities endorsed the view. “The development of storage and the value you can extract from these investments is a very exciting environment from a trader’s perspective,” the origination specialist said. “Storage deployment will have to rise or there will be cannibalisation, putting returns from [solar] assets at risk.”

In keeping with other recent events on European subsidy-free solar, the spectre of price cannibalisation loomed large indeed over the Italia Solare event. The country – one of the world’s cheapest PV markets – will be, experts have predicted for some time, among the worst hit by Europe-wide pressure on PV profits as technology costs continue to plummet.

As speakers noted at the London session, it may pay off in an overheating market to set one’s sights on smaller-scale PV segments. “From what we’ve seen today, there is a vast difference with the value you can get from rooftop projects,” said the STA’s Clark. “The overwhelming logic is that you’d be crazy not to deploy smaller systems on homes and rooftops in Italy, if you’ve got the space.”

The small-is-good rationale prompted some to question whether Italy’s multi-gigawatt solar growth roadmap can succeed if the real money lies with small-scale installations. “Authorities, stakeholders, we all need to work to create a framework to achieve the [solar] targets – it will be tough to do so by building smaller,” said Bluefield’s Girardi.

“I don’t want to say the obvious but if we ask whether the grid currently has capacity to accommodate the PV targets to 2030, the answer is no,” Girardi continued. A solution, he added, could be to legislate for a tax credit for developers who help reinforce the grid by agreeing to build a substation alongside their projects. “It could be an incentive”, the senior director suggested.

The Italy-focused session took place as the Southern European state grappled with political volatility, one of its trademark old ghosts. In the few weeks between the event’s announcement and its actual holding, the country witnessed the collapse of its two-strong government coalition, the resignation of its prime minister and subsequent deal for a new administration under a different alliance.

As Italia Solare’s CEO Viscontini told the London event, the rise of a new cabinet – replacing the government that adopted the new renewable support scheme – finds PV operators at a time of “active” lobbying. Solar’s wish list for the new government includes calls to axe fossil fuel support under capacity mechanisms, as well as a major slashing of authorisation red tape.

Approached by PV Tech, Viscontini explained the association has already addressed a letter to the lawmaker – Stefano Patuanelli – appointed to steer energy policy as the government’s new Industry and Economic Development minister. “The key message is for him not to repeat his predecessors’ mistakes, mainly around the teams they chose to appoint to serve under them,” Viscontini said.