Chinese module supplier JA Solar has completed delivery of 92.5MW of modules to what is expected to be the Philippines’ largest PV array to date.

The 132.5MW project is being built in Cadiz City, in the Negros Occidental province of the Philippines, described in recent local press reports as the country’s solar capital.

JA Solar said it had completed a shipment of its JAP6-72 310W modules to the project in the middle of October.

The company touted its modules’ resistance to potential-induced degradation as being particularly well suited to local conditions where proximity to both the coast and equator require the ability to operate in salty and humid conditions.

Jian Xie, president of JA Solar, said: “The module shipments for the solar project in Cadiz City mark JA Solar's first entry into the Philippine market, demonstrating our resolution and confidence in building a presence in emerging markets. The superior PID-resistance, performance and reliability of JA Solar's modules ensure efficient and reliable power output in the hot and humid conditions of the Philippines.”

The Philippines has been one of the emerging solar markets to watch in 2015, with a string of project announcements hitting the headlines. Most recently global downstream firm Conergy announced 200MW of projects in the country as part of a wider push in Southeast Asia.

Negros Occidental itself has a pipeline of over 1GW, according to a recent local press report, citing a Department of Energy official. The province is also home to the 'San Carlos Solar' project, currently the Philippines' largest operational plant.

Southeast Asia's burgeoning solar market will under the spotlight at the Solar & Off-Grid Renewables Southeast Asia event in Bangkok, Thailand, on 25 & 25 November. Organised by PV Tech's publisher, Solar Media, the event will offer unparalleled insights into emerging opportunities in the region from a top-level line up of speakers. Further details are available here. 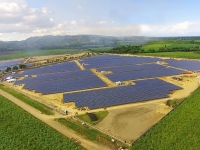