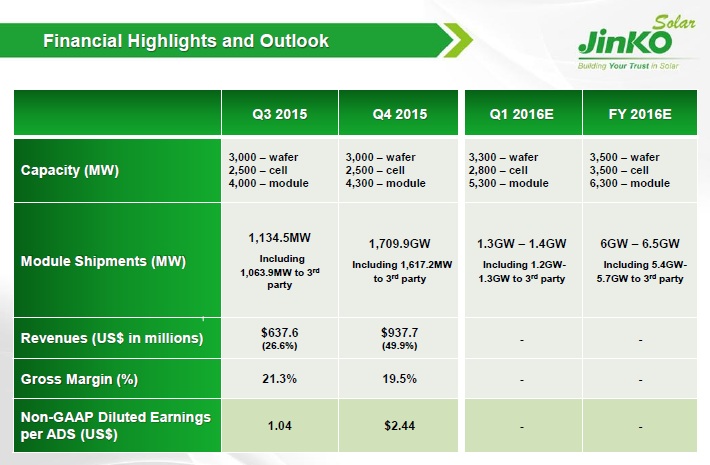 The company shipped a total of 4,511.6MW in 2015, up from module shipment guidance of 4.2GW to 4.5GW. Shipments included a total of 304MW for its solar power projects. Total shipments were 53.3% higher than the previous year, which were themselves around 65% higher than in 2013.

As a result of official shipment figures for 2015, JinkoSolar secured its position as the third largest PV solar module manufacturer in the world and third ranked of six SMSL members, first reported by PV Tech in January, 2016. 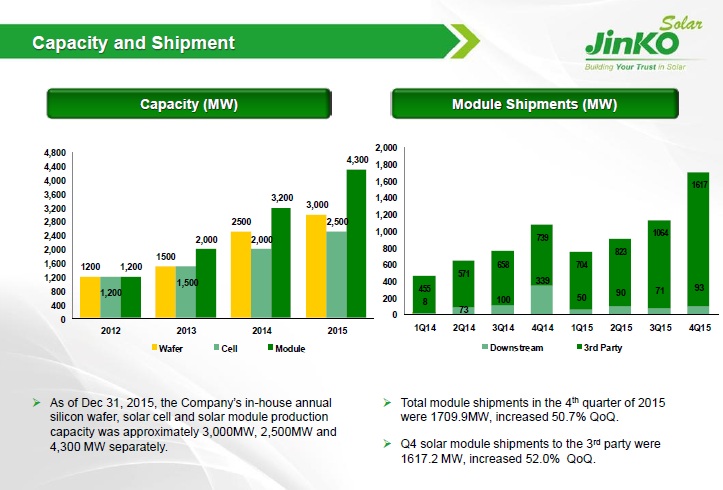 JinkoSolar reported total revenues in 2015 of US$2.48 billion, an increase of 61.1% from the previous year.

Gross profit was US$504.8 million, an increase of 46.0% from the previous years and gross margin was 20.3%, down from 22.4% for the full year 2014. The decrease in gross margin was said to be primarily due to a slight decline in module ASPs. 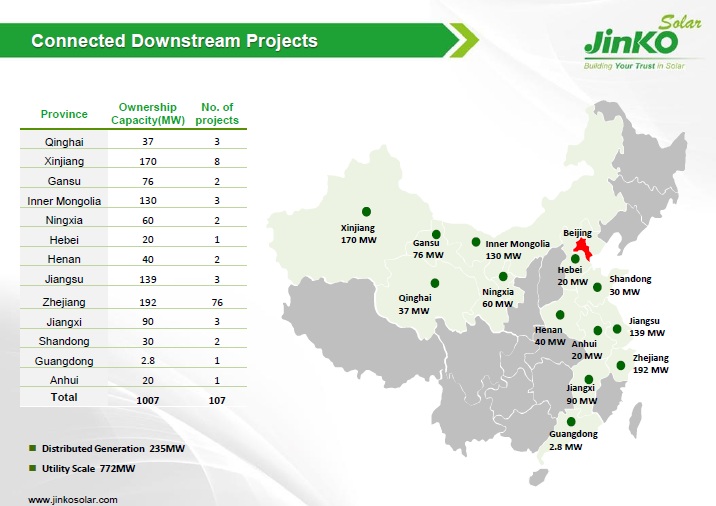 Kangping Chen, JinkoSolar's Chief Executive Officer said, “Our downstream business remains a key focus of ours as we continue to work on building its long-term viability and sustainability. Electricity output during the fourth quarter of 2015 reached 154.4 GWh, down 34.0% sequentially while generating RMB136.3 million in revenue. We connected 161 MW of solar power projects to the grid during the fourth quarter which brings our total capacity of connected projects to 1,006.6 MW as of December 31, 2015. Aside from the effects of seasonality, power output was impacted by the curtailment of projects in China's western regions and strong rainfall in eastern regions. A number of events beyond our control such as delays in subsidy catalog update and a prolonged grid-connection process made us fall short of our connection target for the year but we are confident in our ability to rapidly make up for this shortfall this year. We are now accelerating the spin-off process to maximize shareholder value.”

“Global demand for solar energy continues to grow steadily, added Chen. “We remain the market leader in China where growth and demand is expected to be strong and more balanced this year. With the extension of ITC, the biggest market uncertainty has been removed in the US which provides us with good visibility on market stability well into 2018. ASPs in major markets are expected to further stabilize during the first quarter of 2016 as demand grows. We remain cautious about the expansion of production capacity, but with demand growing sharply, we have plans in place to expand our manufacturing capacity to meet our minimum market demand expectations.”