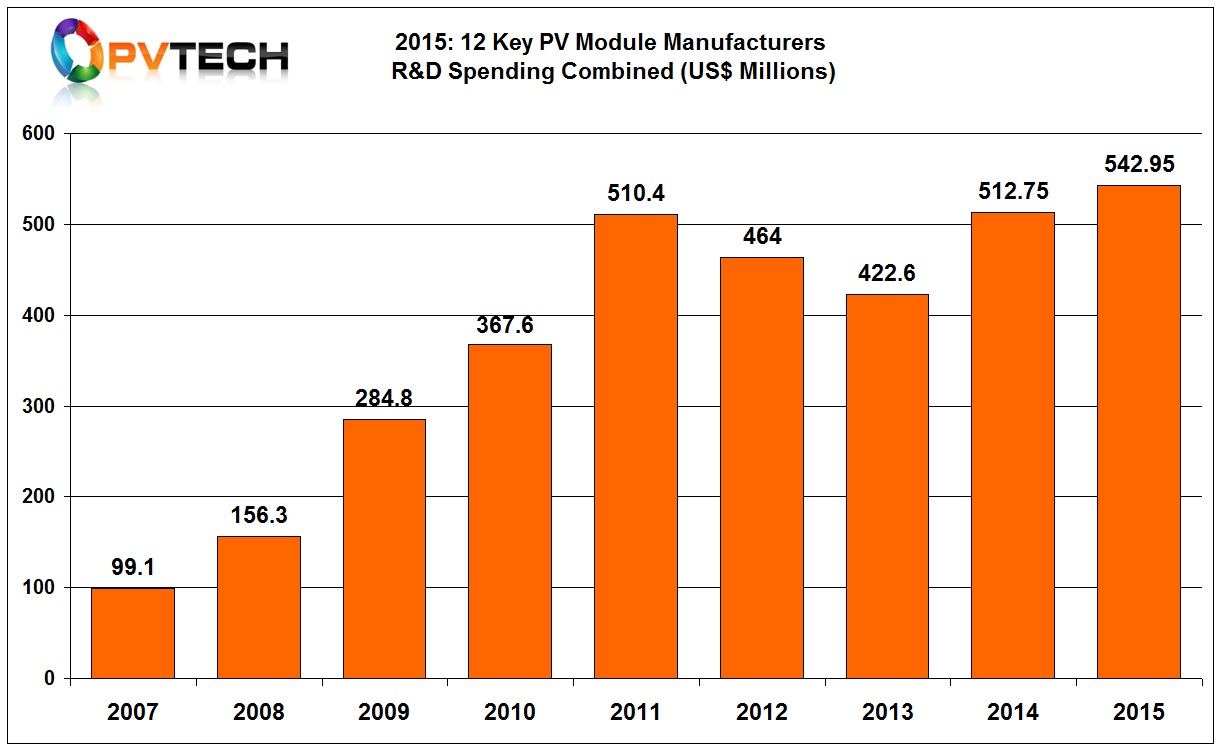 R&D expenditure by 12 major PV module manufacturers had showed a continued increase in 2015 from the remarkable turnaround in 2014, when 11 companies increased spending. However, a total of five companies actually reduced spending in 2015. As a direct consequence the rankings table changed significantly, year-on-year. 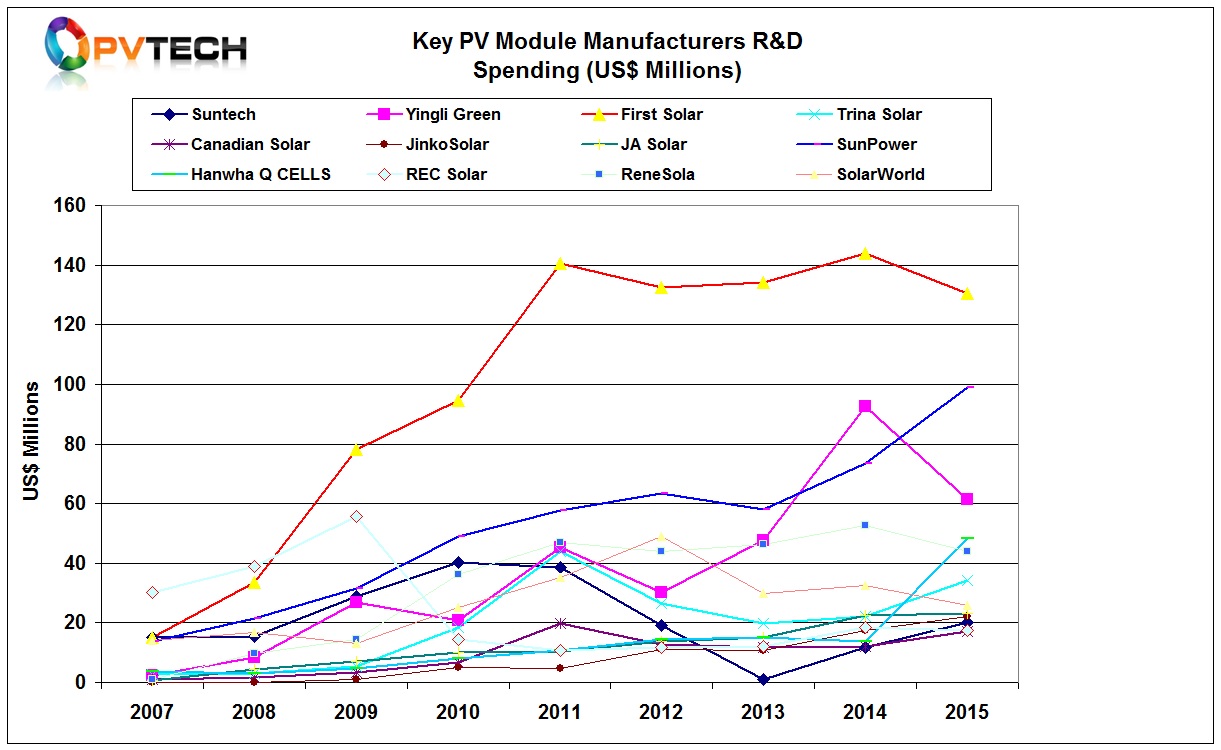 The overall increase in spending in 2014 and 2015 had also led to a further breakout of companies that have historically spent less than US$20 million annually. Only two companies (REC Solar and Canadian Solar) remain in this sub-category in 2015, compared to five (Suntech (SFCE), JinkoSolar, Hanwha SolarOne, REC Solar and Canadian Solar) in 2014.

We had previously reported that analysis of the trajectory of increased spending in 2014, could lead to several companies (JinkoSolar and Suntech) exiting the lowest spending cluster in 2015, however the subsequent merger of the two Hanwha companies has also elevated the newly formed Hanwha Q CELLS to significantly higher ranking and its exit from the sub-US$20 million grouping.

It is interesting to note that the two companies (REC Solar and Canadian Solar) that remain in the sub-US$20 million category contrast significantly from other key metrics such as annual module shipments and in-house nameplate manufacturing capacity.

However, the spending behaviour of two SMSL members, Canadian Solar and JinkoSolar continue to lag behind rivals, despite climbing the SMSL ranks and top 10 manufacturer’s rankings, based on PV module shipments in 2015.

JinkoSolar had long been the perennial R&D spending laggard but in 2014 the company increased spending by 60% to US$17.3 million, climbing several ranking positions and also a new record for the company.

In 2015, JinkoSolar increased R&D spending a further 28% to around US$22.2 million, another record and crossed the US$20 million barrier for the first time.

After a major decline in the number of employees designated to R&D activities in 2013, staffing levels had rebounded strongly. Having reached an initial headcount peak in 2011 of 3,575, numbers declined to a low of 2,911 in 2013. 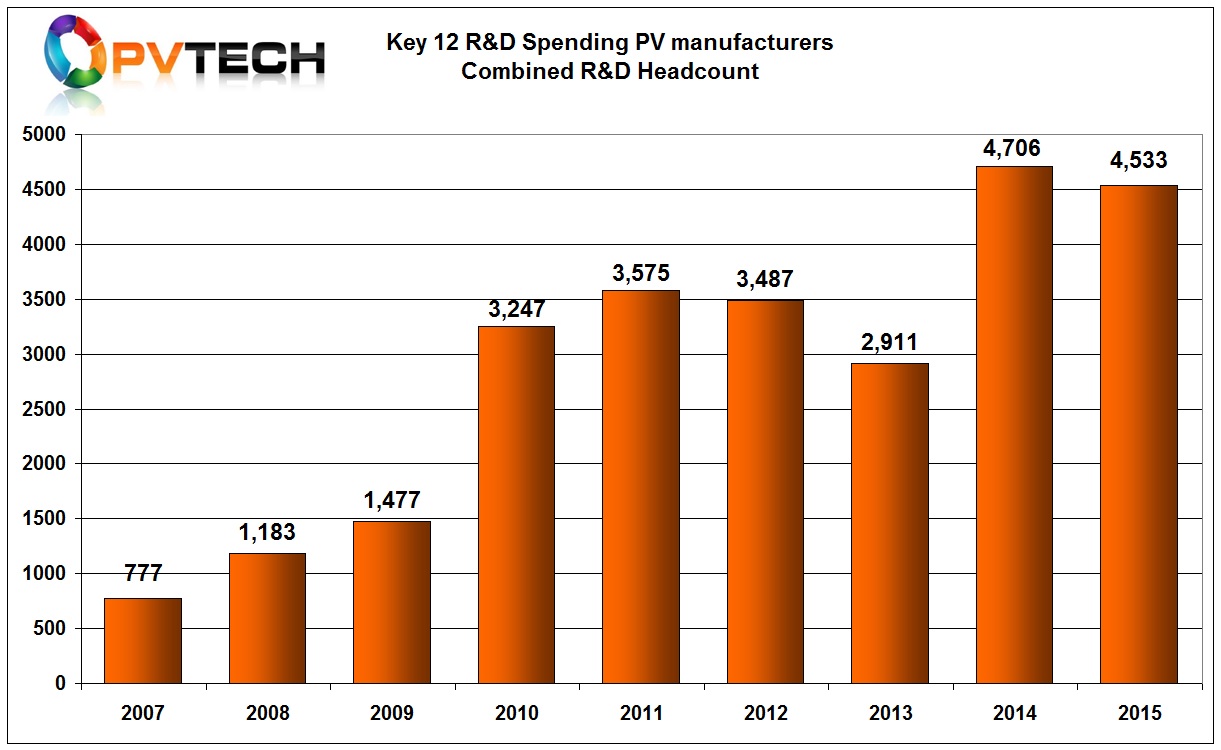 However, the financial troubles at Yingli Green resulted in a significant cut in its R&D personnel levels. The company reduced staffing to 800 in 2015, down from 1,024 in 2014, which could also be attributed to lower manufacturing utilisation rates and an overall company workforce reduction of 3,379 to 14,533 at the end of 2015.

Also of note is SunPower, which is one of the few companies to have incrementally added R&D staff from 2007 onwards. In 2014, SunPower increased its R&D headcount from 300 to 337, ranking the company third behind Trina Solar and Yingli Green and added a further 112 in 2015 to take its R&D headcount to 449.

Overall, R&D staffing levels are at the second highest level since analysis started in 2007. 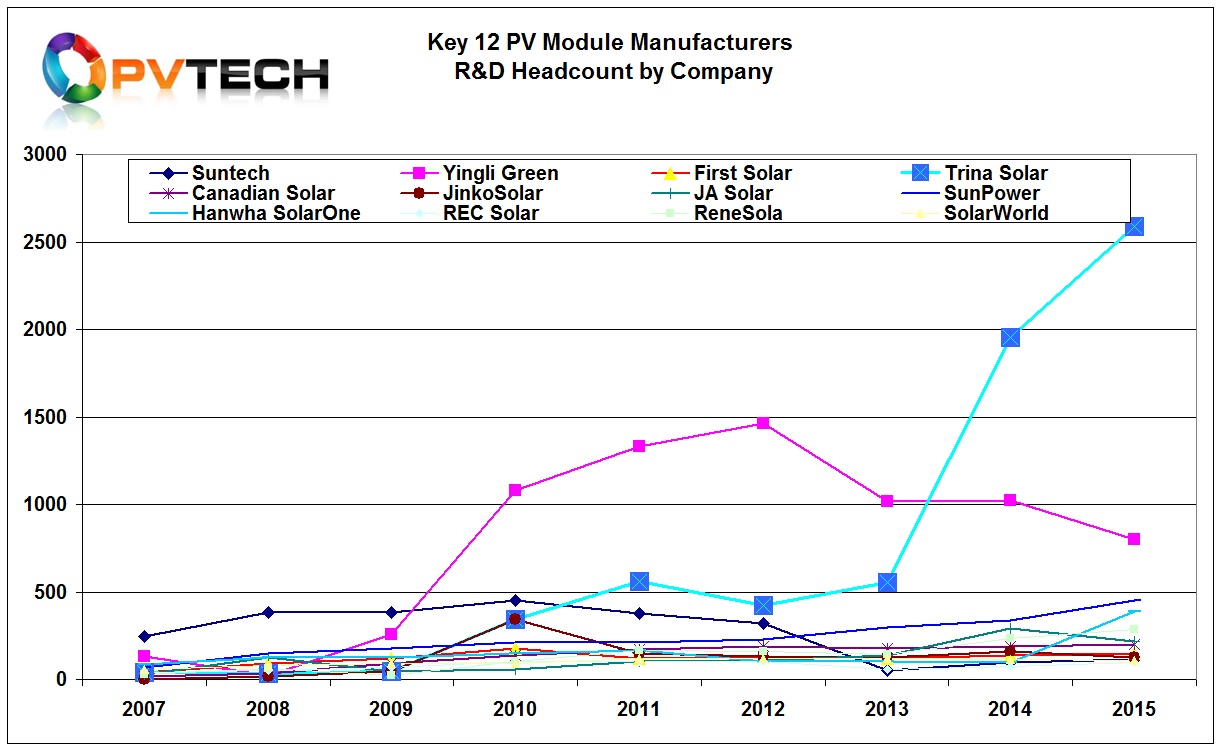 First Solar once again has been ranked first in annual R&D spending, making it the seventh consecutive (2009 – 2015) year for the CdTe thin-film module manufacturing leader. 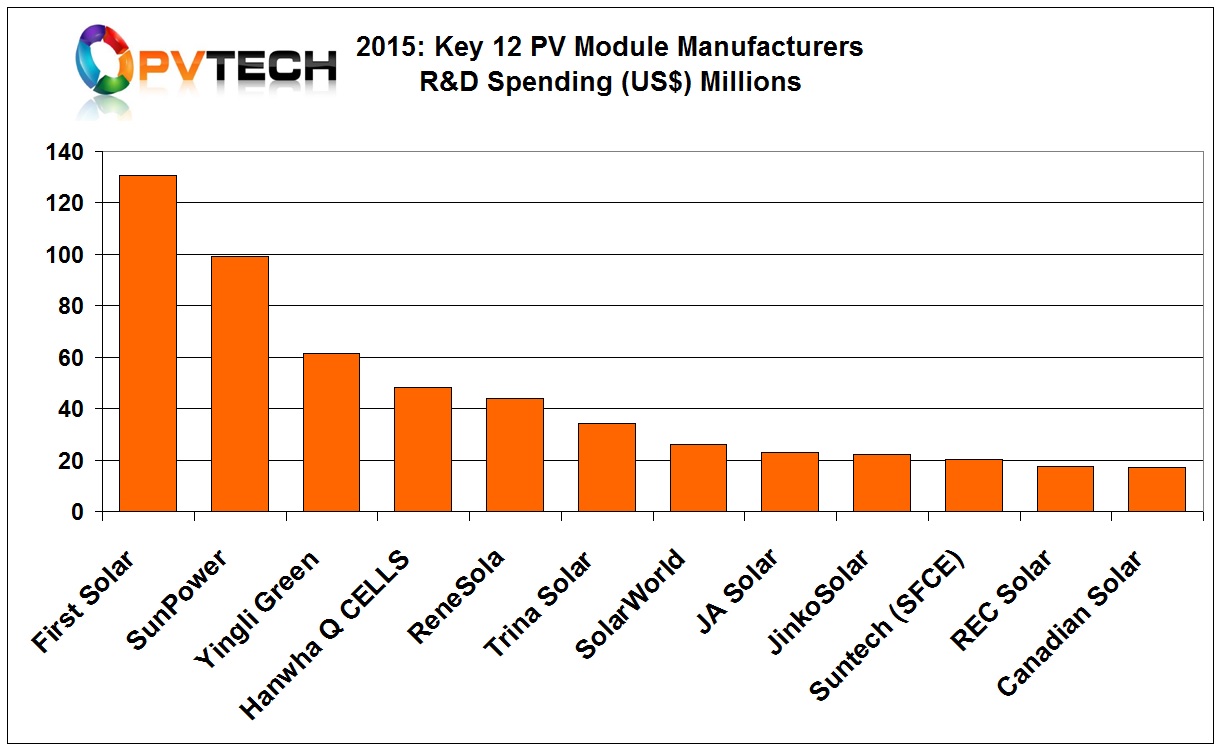 The company allocated US$130.6 million in R&D activities in 2015, compared to US$143.9 million in the previous year. The lower spending year-on-year was attributed to reduced material and module testing costs associated with the development cycle of its next-generation modules.

Indeed, R&D spending would seem to have peaked in 2014, yet the company had exceeded annual spending above US$100 million per annum since 2011. Based on R&D expenditure levels in the first quarter of 2016, First Solar is on track to allocate over US$120 million to R&D activities in 2016, suggesting its planned Series 6 large-area module development will be a key focus through to volume production timelines.

With SunPower having persistently been ranked either second or third since 2008, underlining that proprietary technology requires additional investment when compared to standard mono or multi cell technology. Being ranked second in 2015 was due to two key developments.

Firstly, major financial troubles at Yingli Green meant a curtailment in R&D spending. Secondly, SunPower increased spending from US$73.3 million in 2014 to US$99 million in 2015.

SunPower is going through a number of changes in its planned manufacturing operations that could be reflected in both the higher spending and headcount.

Despite its financial troubles, Yingli Green dropped only one ranking position in 2015, having spent US$61.3 million on R&D, compared to US$92.5 million in 2014.

The company noted in its annual report that the spending reduction was indeed due to its liquidity issues.

The merger of Hanwha SolarOne and Hanwha Q CELLS in 2015 had the effect of pushing up R&D spending and staffing levels for the newly combined company. Having been ranked no higher than ninth in 2012, the company moved to fourth ranked in 2015, up six ranking positions, making it the highest climber in 2015.

Although Renesola has held PV module production capacity at around 2GW for several years, R&D spending has remained high compared with many of its rivals.

As a result, Trina Solar was ranked sixth in spending, moving up one ranking position. As already noted, the company heads R&D headcount by a long way.

Having had its strongest financial year in ages, SolarWorld actually reduced R&D spending and headcount slightly in 2015. The company dropped two ranking positions to seventh on the back of spending of US$25.9 million, down from US$32.6 million in 2014. R&D headcount was only trimmed by 6 positions to 110 in 2015.

Having been aggressively adding capacity over the last few years JA Solar has also increased R&D spending and headcount but at more moderate levels. Having been climbing the spending rankings in recent years, JA Solar dropped several positions in 2015 (sixth to eighth) on only a small incremental increase in R&D spending year-on-year.

The third largest PV module supplier in 2015 was JinkoSolar but its R&D spending had until 2014 been one of the lowest. However, having jumped two ranking positions in 2014, JinkoSolar held on to ninth position in 2015, having allocated US$22.2 million to R&D activities, up from US$17.3 million in 2014.

The company joined First Solar in being one of the two manufacturers to retain the same ranking position year-on-year.
However, like JA Solar, JinkoSolar actually reduced its R&D headcount from 160 in 2014 to 126 at the end of 2015.

Wuxi Suntech, the manufacturing arm of Shunfeng Clean Energy bounced back in the rankings for 2015, spending a total of US$20.2 million, up from US$11.7 million in the previous year. As a result, Wuxi Suntech was ranked tenth, compared to twelfth in 2014.

The second largest PV module manufacturer in 2015 was Canadian Solar. However the company continues to lag its key ‘Silicon Module Super League’ members in R&D spending.

Canadian Solar spent a total of US$17.05 million on R&D in 2015, a significant increase over the US$12.05 million in the previous year but others had spent above US$20 million, relegating the company to twelfth position from eleventh in 2014.

The increase in spending also led to an increase in R&D staffing levels, taking its headcount to 202, up from 190 in 2014.

As highlighted, the rankings were reshaped in 2015 as some companies increased spending, while others reduced spending.

The gap between First Solar and SunPower is closing, while fewer companies remain in the bottom spending bracket of sub-US$20 million.