As part of this tender, the company has also announced a AU$660 million (US$501 million) solar-plus-storage project at Nowingi in north-west Victoria. The 250MW of solar generation will charge an 80MW / 160MWh battery storage system.This would be one of the world’s largest hybrid solar and storage systems in the world, behind Lyon’s own Riverland Solar Storage plant announced in March.

Construction at Nowingi will start in the next few months and is expected to employ about 250 workers.

The tender is open to electricity retailers and generators, heavy electricity users, and other sector participants. Lyon said in a release that the final design of the battery systems would be influenced by the outcome of the tender, and it claimed that such a model was a world-first.

Lyon Group Partner David Green said: “Lyon is able to offer multiple services from the same battery system, and flexibility in contract size to accommodate various users. Lyon will enter into commercial contracts for real services provided by physical assets. This is not a theoretical exercise.”

Along with Nowingi, Lyon is also tendering for projects at Cape York (Queensland) and Riverland (South Australia). 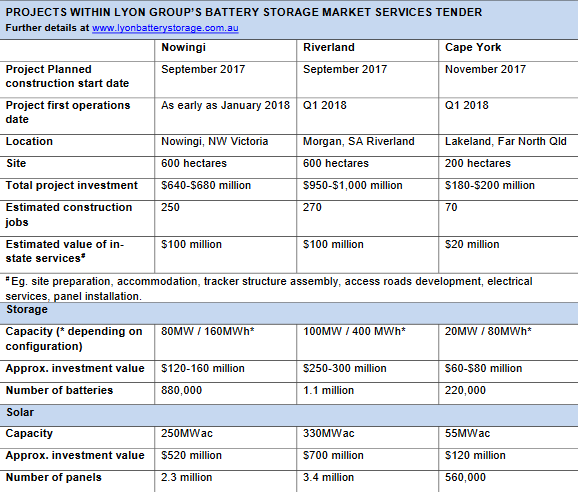 Green said: “These projects are working through development consultation and approvals. The land has been secured, technology and other commercial arrangements are in place, and the required network capacity analysis and consultations are well advanced. Lyon’s projects are 100% equity financed.”

Green also cited the recent Finkel report into the future of Australia’s electricity market, which he said had shone a spotlight on large-scale battery storage and its key role in the energy transition. Under Finkel’s recommendation to introduce Energy Security Obligations for new large-scale renewable energy plants, storage would play a key role by delivering fast frequency response, Green added.

Queensland-based developer SolarQ is also planning to build a 350MW(AC) solar plant combined with a huge 4,000MWh of lithium-ion battery storage in the Gympie Region of Queensland.

6 October 2021
The future is bright for a new era of US solar and storage, and the 8th annual Solar & Storage Finance Summit will provide opportunities to discuss solutions to the industry’s challenges and provide a networking platform designed to bring together the top minds in the industry to do business. With a mix of high-level, informative presentations and panels, a stellar cast of speakers and audience members with deal-making capacity, the 2021 edition of the event will be a sell-out success.
australia, lyon group, queensland, solar-plus-storage, south australia, ssfa17, storage, victoria