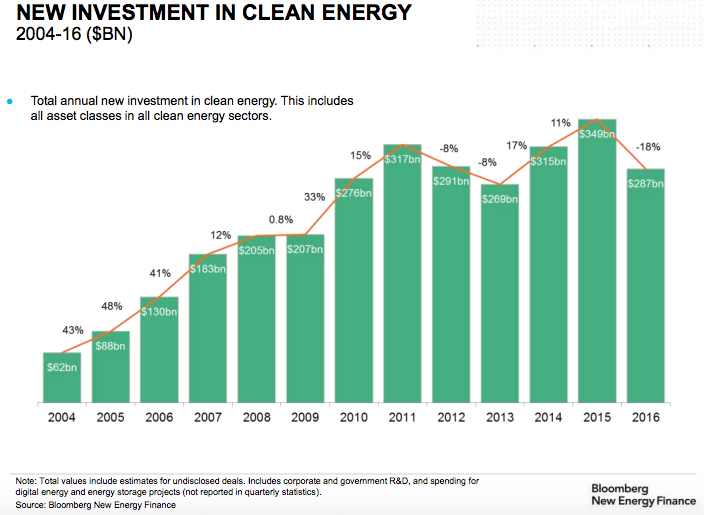 A BNEF report ‘Global trends in clean energy investment’ found that by taking all categories of investment into account, solar reached US$116 billion last year, down 32% from 2015 levels, mainly due to lower costs per MW. Despite the drop, solar remained the leading sector.

For overall clean energy, new investment dropped to US$287.5 billion, down 18% from the record US$349 billion investments of 2015.

This reduction was put down firstly to continued sharp reductions in renewable energy equipment prices, especially in PV.

Secondly, the major markets of China and Japan experienced a slowdown in construction of new large-scale projects in order to focus on integrating the large amount of capacity that they have already deployed.

Chinese renewables investment was down 26% from US$119.1 billion to US$87.8 billion, while the Asian giant's power demand slows and it deals with increased curtailments of wind and solar. Meanwhile, Japanese investment saw a dramatic 43% drop to US$22.8 billion, as it faces the prospect of future growth coming mainly from rooftop solar instead of utility-scale projects, according to Justin Wu, head of Asia for BNEF.

BNEF noted that investments were down in some developing nations because capacity won in 2016 auctions failed to secure finance before year-end. It cited particularly large reductions in South Africa (76%), Chile (80%), Mexico (59%) and Uruguay (74%).

In sharp contrast, Jordan hit US$1.2 billion with a 147% increase in investment. India stayed almost level with the addition of mega-scale solar projects, while the US dropped 7% to US$58.6 billion, as developers worked on wind and solar projects that will be eligible for the extended Investment Tax Credit (ITC).

While worldwide investment in renewables projects of less than 1MW size saw 28% less investment with US$39.8 billion, BNEF stated: “Most of this year-on-year drop reflected falling costs of solar systems rather than a decline in interest from buyers.”

Finally, driven by solar, overall renewables capacity additions still managed to rise, even though wind slowed to 56.5GW, down from 63GW in 2015. Off-shore wind investment was also deemed a bright spot in 2016.