In preparation for our latest manufacturing and technology webinars on Wednesday 7 December and Thursday 8 December, we have updated our in-house models for the Silicon Module Super League (SMSL) companies, revealing the continued push towards high-efficiency cell production.

Collectively, this group of seven SMSL companies is seeking to move to supplying 60% of all solar modules to the industry in 2018. As such, the technologies employed by this collective group ultimately provide key benchmarks for other solar PV manufacturers.

The full analysis of all leading c-Si and thin-film manufacturers is provided within our PV Manufacturing & Technology Quarterly report, with the next release due out in January 2017. The report, and the webinar series for 7-8 December this week, is directly related also to the topics that will be covered at the PV CellTech conference in Penang, Malaysia on 14-15 March 2017, where the CTOs and heads of R&D from the company’s leading manufacturers have been confirmed to speak.

The evolution of cell technologies being targeted by the SMSL is best shown in the graphic below. 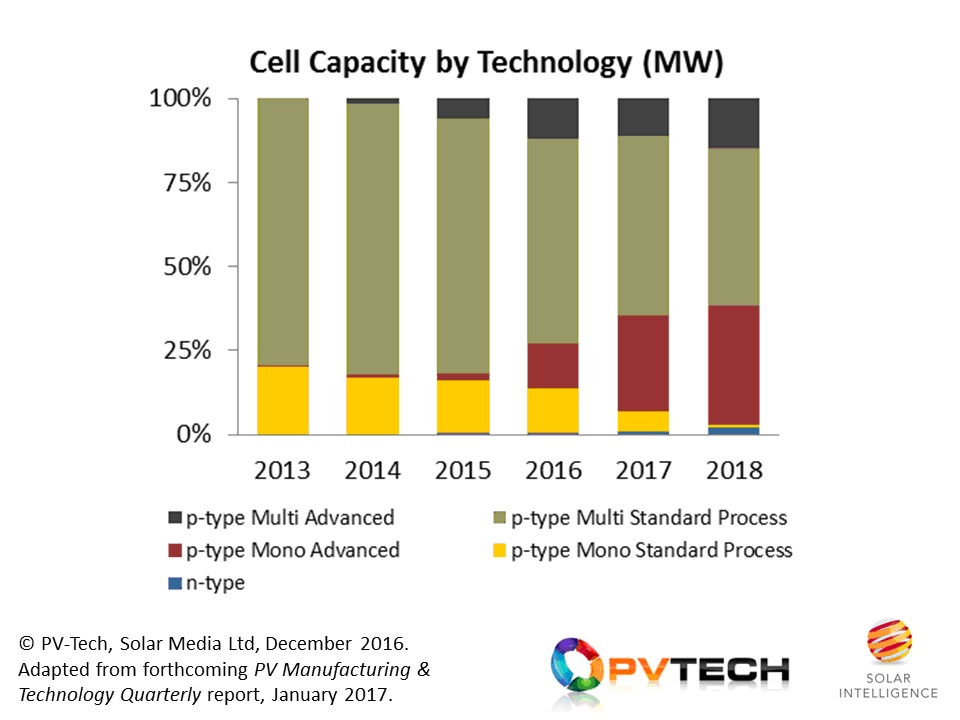 The graphic above is essentially a stack of the individual technology models and forecasts we have developed for each of the SMSL companies. While each company effectively has a unique approach to the mix of mono and multi and high-efficiency preferences, the cumulative output is extremely important.

The best way to view the data is to compare 2013 with the forecast for 2018. Here we can see clearly the dual approaches to p-multi and p-mono, with most companies having a strong bias to one or the other.

The fact that the SMSL contains the two companies driving overall p-mono and p-multi wafer activity (LONGi and GCL, respectively) makes the data all the more pertinent. Each company is integral to how in-house cell production and third-party wafer users move forward with technology roadmaps. Indeed, having vertically-integrated companies like these as part of the SMSL also opens up questions regarding competing with your own customers, when it comes to cell and module supply. It will be fascinating how this unfolds in the next 12-18 months.

Capacity based on n-type cells from the SMSL is not being forecast as reaching any significant levels to the end of 2018, despite some announcements from SMSL companies in the past 12 months. We believe that each company will ultimately choose to maximize efficiencies at the lowest costs for either p-mono or p-multi. We also do not see any fundamental reason why LONGi should move to p-mono pulling, as this would simply be to the detriment of LERRI Solar.

As such, we can then segment three types of competition for cell manufacturing, outside of the SMSL.

The first type of company is comprised of technology laggards that will simply follow the roadmaps on p-mono and p-multi, to keep module powers at market competitive levels. This includes most of the rest-of-China c-Si universe, and much of India and Vietnam.

The second group consists of c-Si companies (mostly outside China or Taiwan control) such as SunPower, REC Solar and SolarWorld that effectively have GW-level cell technology roadmaps that run in isolation from the SMSL.

The final group is limited to First Solar, as the only thin-film company with a long-term plan to compete with the best p-mono PERC modules on the market in 2018 and 2019.

Returning to the SMSL graphic above, we can see clearly the increased adoption of p-mono and p-multi advanced cell capacity. The p-mono is almost exclusively coming from PERC upgrades or new lines additions. The p-multi route is coming from both PERC and (from 2017) enhanced cell texturization that is needed to accommodate the introduction of diamond wire saws for multi wafer slicing.

As we move into 2017, the benchmark for utility module supply in 2018 may well be coming from 72-cell M2 wafer-supplied p-mono PERC with 5 busbars. Having multi-GW supply of this variant is one thing – knowing the blended cost (COGS) structure associated with this is possibly the metric to track the closest.

A full-length feature on the SMSL will also feature in the forthcoming release of Photovoltaics International, Volume 34.

To learn more about the SMSL forecasts out to 2018, you can register for our webinar: Benchmarking the leading solar cell and thin-film manufacturing technologies for 2017