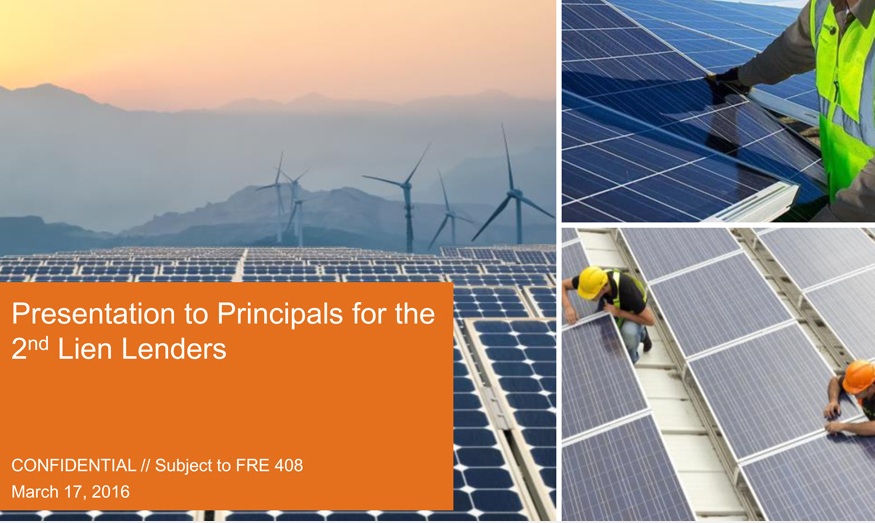 Embattled renewables firm SunEdison has confirmed that it was seeking debtor-in-possession (DIP) financing, according to an SEC filing.

The company said that negotiations for DIP financing were still ongoing, noting that no assurances could yet be made about such financing agreements being made.

Concerns about an imminent bankruptcy were heightened when its yieldco Terraform Global warned in an SEC filing that its parent was close to bankruptcy.

The DIP financing is usually only sourced ahead of a looming bankruptcy. 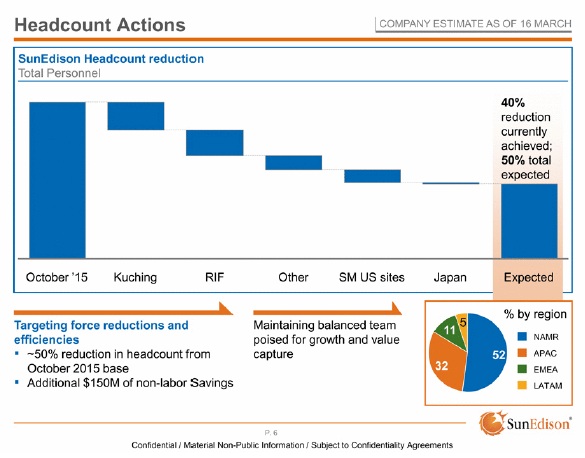 The company also filed a presentation provided to potential DIP financing firms about the condition of the company.

Due to the liquidity issues, SunEdison noted that it had reduced its headcount by 40% and expected the headcount to be further reduced to 50% from its October, 2015 base.

The financial challenges were highlighted in another slide, noting remaining payment liabilities of around US$769 million and a remaining cash impact in 2016 of around US$435 million.

SunEdsion noted that approximately 72% of first quarter 2016 outflows were related to the direct costs associated with projects in development of construction. 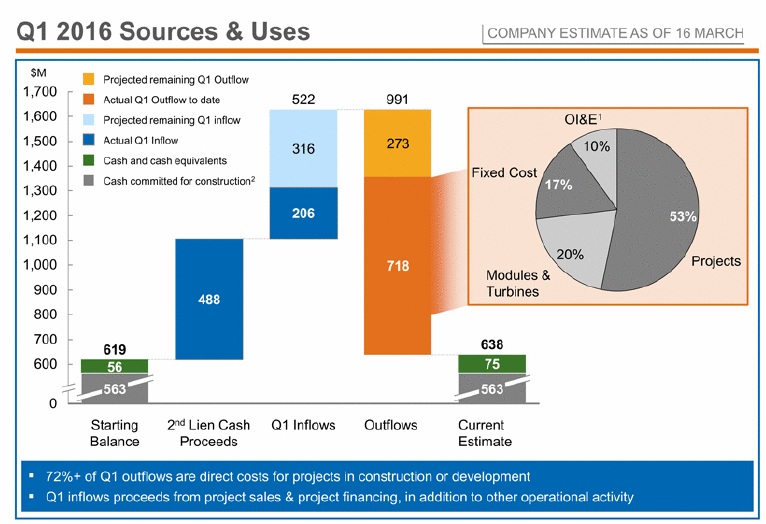 Outstanding cash outflows in the quarter totalled around US$273 million, which included US$40 million of corporate spending, regarded as 'critical.'

SunEdsion noted in the presentation that it had calculated it would required approximately US$310 million in further financing arrangements to continue with its core business operations, without impacting its ability to maximise the value of its business plans. 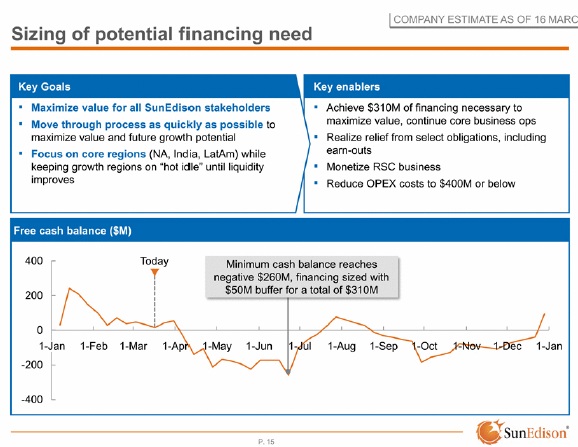 28 September 2021
Solar Solutions International is the largest trade show for solar energy in Northwest Europe. Now the solar market has grown up, it's time for the next step. Solar Solutions International displays more than 500 innovations and over 100 practical seminars concerning the latest in energy storage, smart products, and an ever evolving array of solar panels. As an exclusively B2B trade show, Solar Solutions International offers both exhibitors and visitors the chance to network at the highest level. Duurzaam Verwarmd, the largest trade show for sustainable HVAC technology in the Benelux, is held simultaneously. This way your one visit gets you up to date with all of the developments in both sustainable energy and heating.

6 October 2021
Intersolar Europe is the world’s leading exhibition for the solar industry. It takes place as part of The smarter E Europe – the continent’s largest platform for the energy industry. Under the motto “Connecting solar business,” manufacturers, suppliers, distributors, service providers and project planners and developers from around the world meet in Munich every year to discuss the latest developments and trends, explore innovations firsthand and meet potential new customers.

6 October 2021
The future is bright for a new era of US solar and storage, and the 8th annual Solar & Storage Finance Summit will provide opportunities to discuss solutions to the industry’s challenges and provide a networking platform designed to bring together the top minds in the industry to do business. With a mix of high-level, informative presentations and panels, a stellar cast of speakers and audience members with deal-making capacity, the 2021 edition of the event will be a sell-out success.

19 October 2021
This year’s EV World Congress will hold a special role, not only as the first live EverythingEV event in over a year – a chance to renew your connections and re-engage with the EV sector face to face – but also as a chance to share insight and inspiration as world starts to look towards move on post COVID towards hitting ambitious decarbonisation goals in 2030 and beyond. As ever, we will be bringing world leading organisations, cities, and technology providers to the UK to inspire EV innovators, and delve into the challenges facing the sector as the UK looks to revolutionise road transport.

20 October 2021
Utility-scale solar is evolving, shaped by higher power modules and demand for increasingly lower levelised cost of electricity (LCOE). Those trends are also changing project requirements elsewhere, with inverters capable of delivering high power density and power capacity in strong demand. In this webinar, FIMER will detail how its innovative high-power, multi-MPPT string inverter and modular conversion solution can both meet those demands and transform the utility-scale solar sector for the better.

September 23, 2021
US national residential and C&I solar plant performance assessment company Omnidian has completed a US$33 million Series B raise.

September 23, 2021
US developer Clearway Energy Group has signed a virtual power purchase agreement (VPPA) with Toyota in North America to supply the company with 80MW of power, accounting for 8% of the company’s regional operations