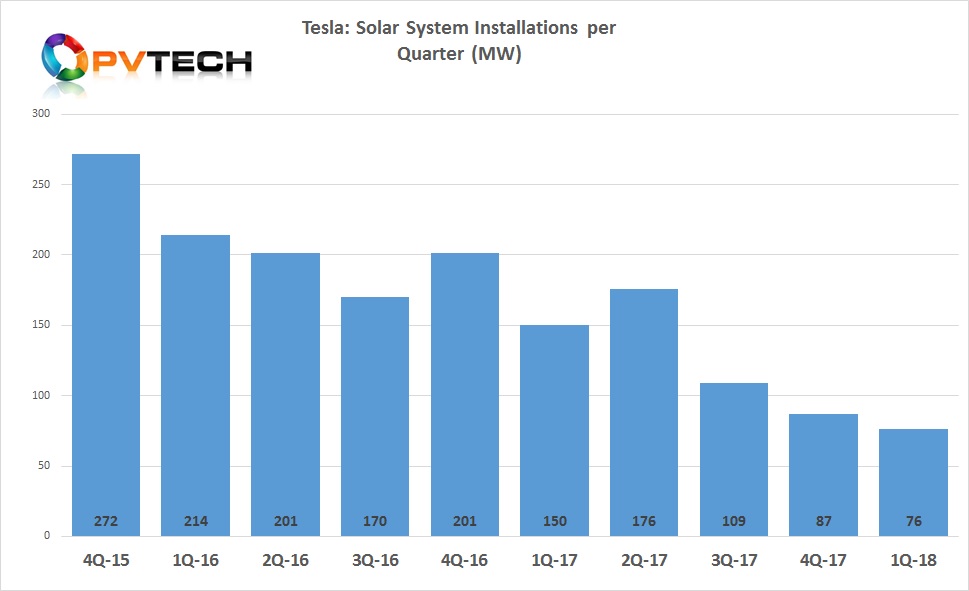 Tesla has overseen a decline in its PV installations for three quarters in a row. Under SolarCity, installs were 214MW in the first quarter of 2016, thus generating a two-year overall decline in installations.

Tesla reiterated since acquiring SolarCity that its restructuring of the once leading residential PV installer would have a negative effect on installation figures as it changes the sales business model and shifted to selling inside Tesla’s automotive retail outlets as well as online mechanisms.

However, Tesla noted that it did not expect any real improvement in cash flow from PV installations in the first half of 2018. The company claimed that its booked customer base was waiting for its energy storage systems to become readily available before accepting installation of rooftop PV systems.

Tesla has also highlighted a new strategy of prioritizing installations with its energy storage product offering is available in quantity to meet demand, that is combined with its traditional PV system product offering.

Without being specific, Tesla said the new sales strategy “should have a positive impact on our solar deployments in upcoming quarters”.

Production of its complete solar roof tiling product, a manufacturing JV with Panasonic, was expected to accelerate “significantly in the second half of this year,” potentially around a year after Panasonic started making something at Tesla’s Gigafactory 2 in Buffalo, New York state.

Tesla reported energy generation and storage revenue segment sales of US$410 million in the first quarter of 2018, up from US$317.5 million in the previous quarter.

Gross margin for the segment also increased to 8.5%, compared to 5.5% in the previous quarter. However, gross margins remain significantly below the prior year period of 29.1% on sales of US$213 million, indicating over a 2,000% decline.