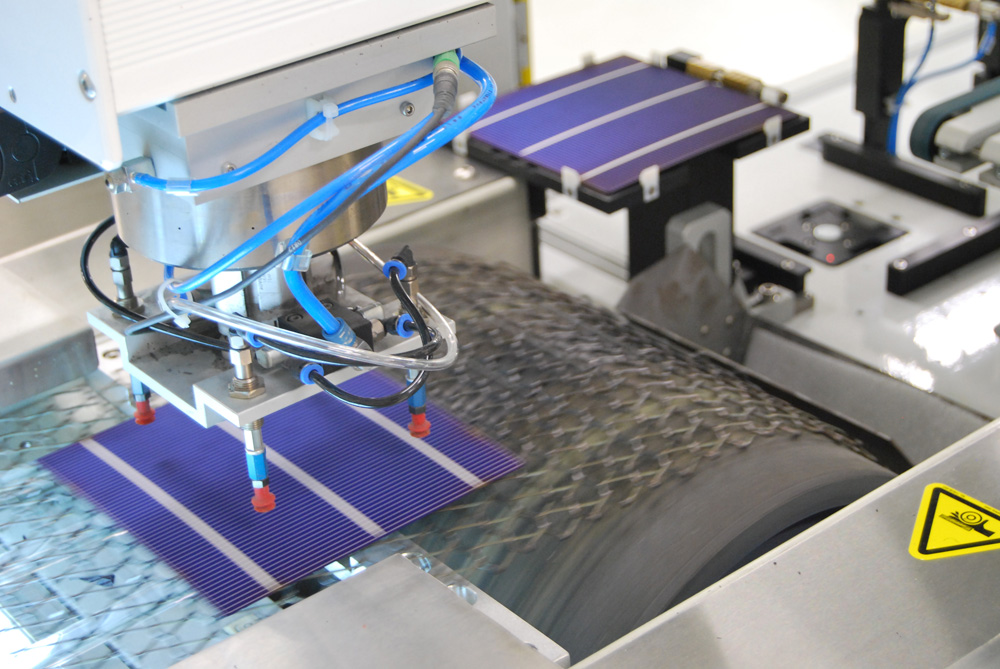 Trina Solar reported shipments of 1,703.2MW, consisting of 1,353.2MW of external shipments and 350MW of shipments to its own downstream PV power projects. Total module shipments increased 38.3% sequentially and 60.1% year-over-year.

The company also significantly raised full year shipment guidance from a previously upward revision of between 4.9GW to 5.1GW to 5.5GW to 5.6GW, solidifying its position as the leading PV module manufacturing in the world in 2015.

Jifan Gao, chairman and CEO of Trina Solar, commented: “We had a solid quarter of operations that came in ahead of our expectations, despite the one-off negative impact from the settlement of the Solyndra lawsuit and currency fluctuations that we experienced. We shipped a record 1.7GW of modules, which enables us to achieve a significant milestone of over 15GW of module shipments cumulatively since our inception. We also connected 251.9MW of projects to the grid in the third quarter, making our total retained projects reach 610.4MW. This further strengthened our position as a leading module manufacturer and positioned us well to become a world-class solar project player. We maintained strong growth momentum in China and the US, with record shipments to both markets and continued to execute our strategy to increase our presence in new and emerging markets, such as India and Thailand. New and emerging markets have become our third largest destination for shipments over the past two quarters.”

Trina Solar reported net revenue of US$792.6 million, an increase of 9.6% sequentially and 28.5% year-over-year, including electricity revenues from downstream solar power projects of US$15.3 million. 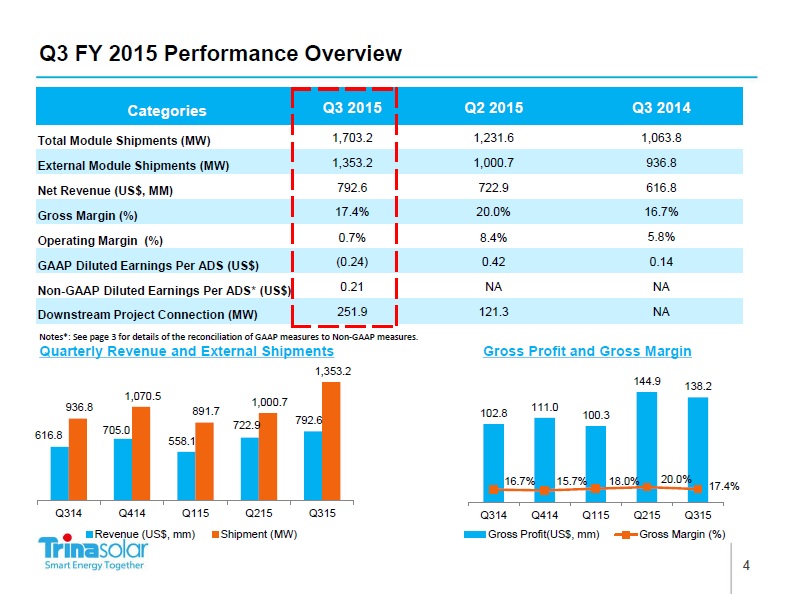 Updated: Trina Solar said that its OEM Malaysia-based facility was ramping as well as its OEM facility in Vietnam that would supply local regional markets.

The company noted that in-house ingot production capacity at the end of the third quarter stood at approximately 2.3 GW, while wafer capacity stood at around 1.8GW.

Solar cell capacity was 3.5GW at the end of the quarter and PV module capacity stood at around 4.7GW.

Trina Solar said in its third quarter earnings call that it planned to expand in-house ingot production by the end of 2016 to 2.4GW, while wafer production would be increased to 1.9GW, only a 100MW increase, which could be expected to come from upgrades and debottlenecking.

Management guided capital expenditure in 2016 to meet capacity expansion targets of around US$300 million. 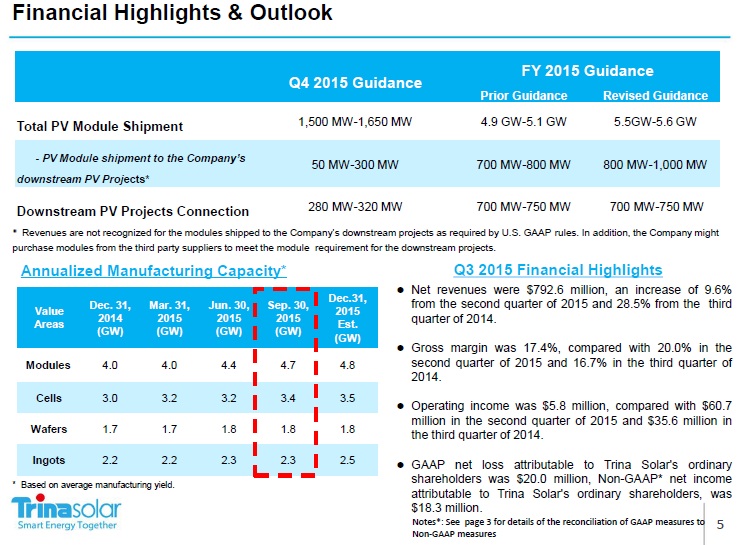 Trina Solar said it had a total of 610.4MW downstream operating assets that generated electricity power, including 588.2MW in China, 4.2MW in the US, and 18.0MW in Europe. The 588.2MW projects in China consisted of 513.0MW of utility projects and 75.2MW of DG projects.