The company exceeded fourth quarter shipment guidance of 1.5GW to 1.65GW to reach 1,776.3MW, consisting of 1,579.7MW of external shipments and 196.6MW of shipments it its own downstream PV power plant business.

Jifan Gao, chairman and CEO of Trina Solar said: “2015 was in many ways a strong year for Trina Solar as we achieved record results on both a sequential and year-over-year basis in each quarter. During the year, we entered the Indian market and a number of other emerging markets, which helped to expand our global footprint from 43 to 63 countries. We also made progress on our global capacity expansion plans. Our partnered facilities in Vietnam and Malaysia, where we employ a relatively asset light model, helped to meet the growing demand for our products in overseas markets, and we expect our cell and module facility in Thailand to become operational in 2016. Our downstream business experienced more growth in China's highly competitive environment. All of these efforts have solidified our foundation and leave us well positioned for 2016.” 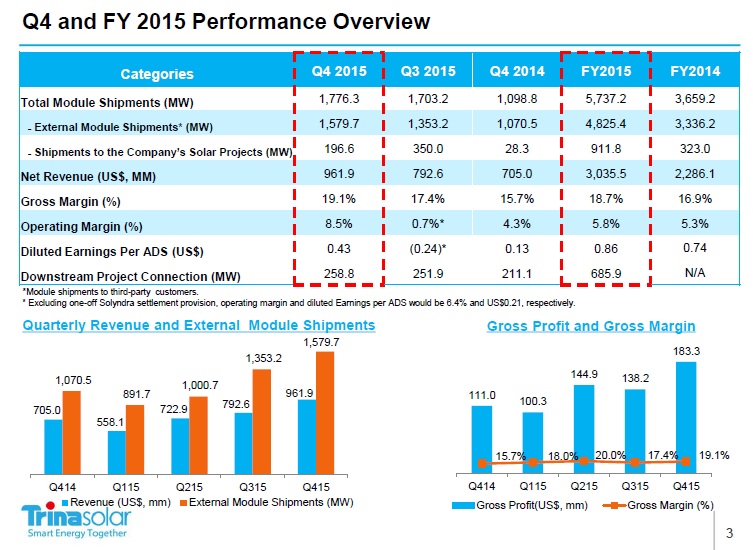 Trina Solar said that it expected total PV module shipments of between 6.3GW and 6.55GW in 2016, which includes 450MW to 550MW shipped to its downstream projects, revenues of which would not be recognised.

The company expects to ship between 1.37GW to 1.45GW of PV modules in the first quarter of 2016, all of which will be shipped to third-party customers. 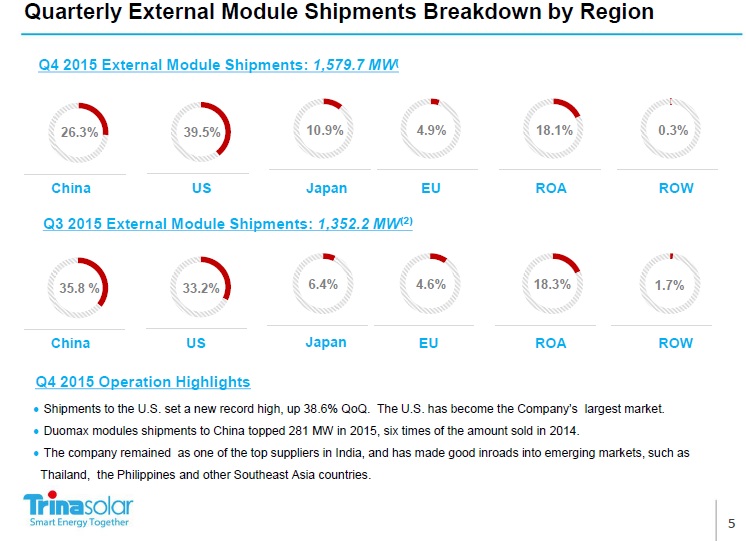 Full-year 2015 gross margin was 18.7%, compared with 16.9% in 2014. The increase was said to be due to a higher reduction in manufacturing costs compared with the general decline in module ASP, as well as increased sales of overseas downstream solar projects and EPC services, which produce higher margins than module sales. 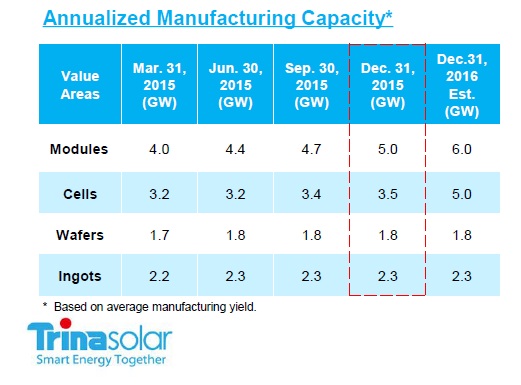 Both ingot and wafer capacities will therefore remain unchanged from 2015, while solar cell capacity will increase 1.5GW in 2016 and module capacity by 1GW.

Trina Solar reported that in the fourth quarter of 2015, a total of 258.8MW PV power projects had been connected to the grid, including 132.5MW of utility projects and 126.3MW of DG projects in China.

In total, Trina Solar reported that it had connected a total of 685.9MW of PV power projects to the grid across the globe, of which, DG projects in China were 200.4MW, accounting for 29.2% in 2015.

Trina Solar said that it expected to connect to the grid between 750MW and 850MW of downstream PV power projects across the world in 2016, including 10% to 15% of DG projects in China.