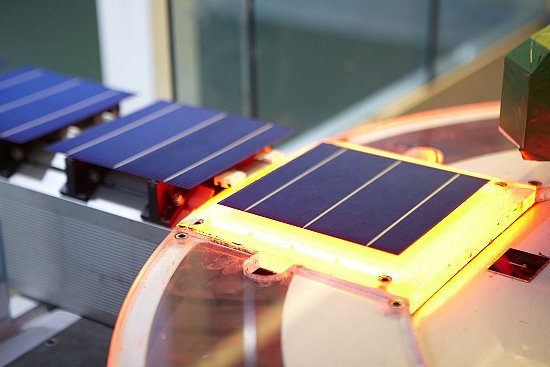 The solar cell was developed on a large-size industrial boron-doped Cz-Si substrate with an advanced Honey Plus process that assimilated both front and back surface passivation. The 156×156 mm2 solar cell reached a total-area efficiency of 22.13% — a total that has been independently confirmed by the Fraunhofer ISE CalLab in Germany.

This efficiency record surpasses the previous record of 21.40% for the same type of solar cell that was also developed by the State Key Laboratory of Trina Solar in 2014, showcasing a leap in efficiency improvement of 0.73% for one year.

Dr. Pierre Verlinden, vice-president and chief scientist at Trina Solar, said: “We believe that this is the highest efficiency ever reported to date for a p-type industrial solar cell. This Honey Plus solar cell, fabricated with a low-cost industrial process, sits on the efficiency scale which is just 2.87% below the world record of 25% established by the University of New South Wales with a 2x2cm2 laboratory solar cell. In 2015, our R&D teams have achieved two significant records with PERC solar cell technologies: we reached an efficiency of 21.25% with multi-crystalline silicon PERC cells, followed a few weeks later with a 22.13% efficiency record for mono-crystalline silicon cells. This also demonstrates the enormous potential of p-type substrates.”

Finlay Colville, head of solar intelligence at Solar Media, added: “The announcement from Trina is yet another indication of the increased focus from leading c-Si cell producers in China on R&D and driving efficiency improvements on p-type cell technologies.

“The latest announcement from Trina is likely using state-of-the-art R&D and pilot line production equipment at Trina, but is heavily driven by rear side passivation, or PERC. The phasing of PERC in mass production is becoming a key issue to track, with as yet only a few companies in high volume production.”

Trina Solar's Dr. Verlinden is confirmed to speak at PV Tech's inaugural cell manufacturing conference PVCellTech in Malaysia, 16-17 March 2016, where PERC activities and company roadmaps are due to be presented by the leading c-Si producers in the industry today.