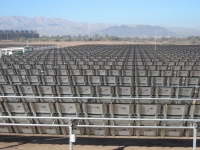 Hive is to identify and pursue solar projects in Mexico and across Central America, which the company said was “relatively untapped”.

The company has recruited Bernardo Fernandez as director of business development and project management for Mexico, Central America and the Caribbean. His role will be to identify and manage projects both through PPA agreements and future public auctions with a specific focus on utility-scale ground-mounts and commercial rooftops.

While there are currently no government subsidies for ground-mounted solar projects in Mexico the technology is largely supported by the country’s government. Such are Mexico’s energy prices – particularly in remote areas – that renewable sources are often cheaper fossil-fuel based generators.

The country allows for energy users to purchase power from private producers and portfolios, while new laws which would pave the way for net metering and energy storage are also in the works.

“High electricity prices from traditional sources mean that there is a huge opportunity for solar PV development and renewable energy supply in the country.

“Following recent reforms of the energy market in Mexico, we’re now able to provide an economically viable, clean source of energy at an affordable price in what is potentially the biggest emerging solar energy market in the world,” Fernandez said.

Hive notes forecasts from Mexico’s governmental energy body the Secreteria de Energia for as much as 6GW of solar installed by 2020, of which less than 1% is currently installed.

Giles Redpath, chief executive at Hive Energy, said that the “stage in Mexico is set” for rapid deployment of solar PV.

“Without any subsidies or FoTs to roll back, Mexico’s solar market is almost certain to persist in the long term and we want to take this opportunity to supporting the fledgling solar industry with our wealth of experience, while generating employment opportunities and giving customers choice in how they source their electricity,” he said.

The move marks the latest in a string of forays into international markets by the developer having last year announced moves into both Turkey and the UAE, triggered in part by the government’s reset of renewables subsidies.