According to the latest and hotly anticipated market report from GTM Research and the Solar Energy Industries Association (SEIA) ahead of Solar Power International (SPI) 2016, the US is expected to install over 10GW in the second-half of 2016 to meet a total annual forecast of 13.9GW.

Although the annual installation figures for 2016 are lower than previously guided at 13.9GW, the second half of the year is expected to see around 10,184GW installed, consolidating the US as the second largest solar market this year. 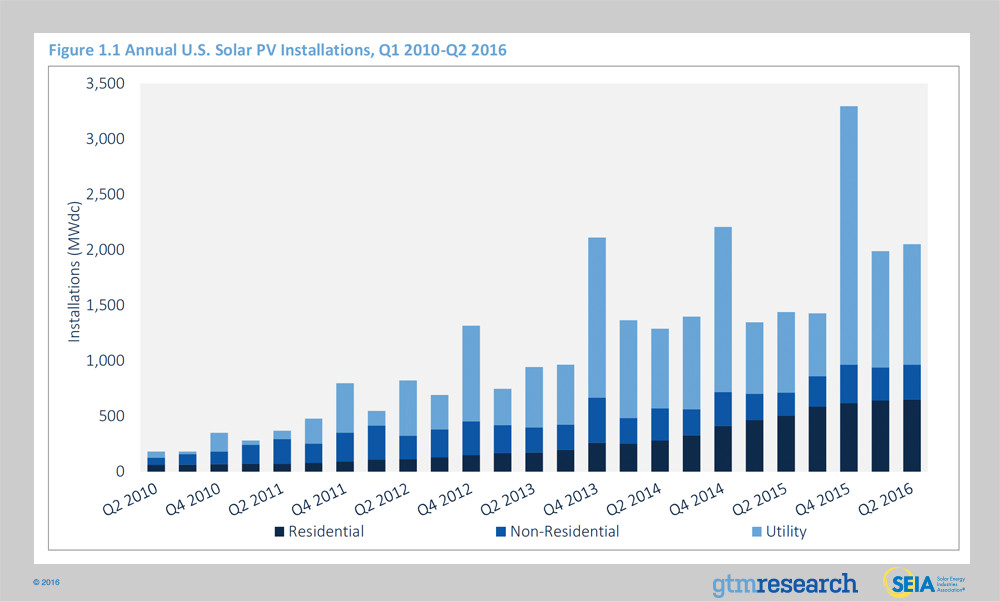 “We're seeing the beginning of an unprecedented wave of growth that will occur throughout the remainder of 2016, specifically within the utility PV segment,” said Cory Honeyman, GTM Research associate director of U.S. solar research. “With more than 10 gigawatts of utility PV currently under construction, the second half of this year and the first half of 2017 are on track to continue breaking records for solar capacity additions.”

A major contributor to the expected second half year installation growth is due to utility-scale solar installations, which accounted for 53% of all installed PV in the first half of this year, while a further 7.8GW was said to be under construction.

Utility PV is expected to drive the majority of demand in 2016, accounting for over 70% of new capacity, according to the report.

“Solar works in all 50 states and this report proves that what many would consider non-traditional markets are now firmly a part of the clean energy movement,” said Tom Kimbis, SEIA's interim president. “While it took us 40 years to hit 1 million U.S. solar installations, we're expected to hit 2 million within the next two years. That record-breaking growth is made possible by solar's cost-competitiveness and the vast benefits it provides consumers, our nation's economy and environment.”

However, the report acknowledges that the US residential market has not been as strong as expected in the first half of the year, despite reaching the one million residential rooftop installation milestone.

The report noted that the key California market had experienced a slowdown, but other state markets, including Utah and Texas had helped support overall installs in the segment reach 650MW (DC) in the second quarter of 2016. Residential PV installations were said to have increased by only 1% over the first quarter of 2016 and 29% year-on-year.

California was said to have accounted for 42% of rooftop PV installations in the second quarter of 2016, its lowest share since the fourth quarter of 2012.

Yet, California was said to have exceeded expectations in the non-residential market segment where it represented an ‘unprecedented’ 50% of the segment's installations in the second quarter of 2016.

Despite the lull in California, more US states (11) added more than 25MW of rooftop PV in the first half of the year than (7) in the prior year period. GTM research noted that by 2021, more than 30 states in the US would add more than 100MW of annual capacity, with 20 of those states becoming home to more than 1GW of total operating solar PV.