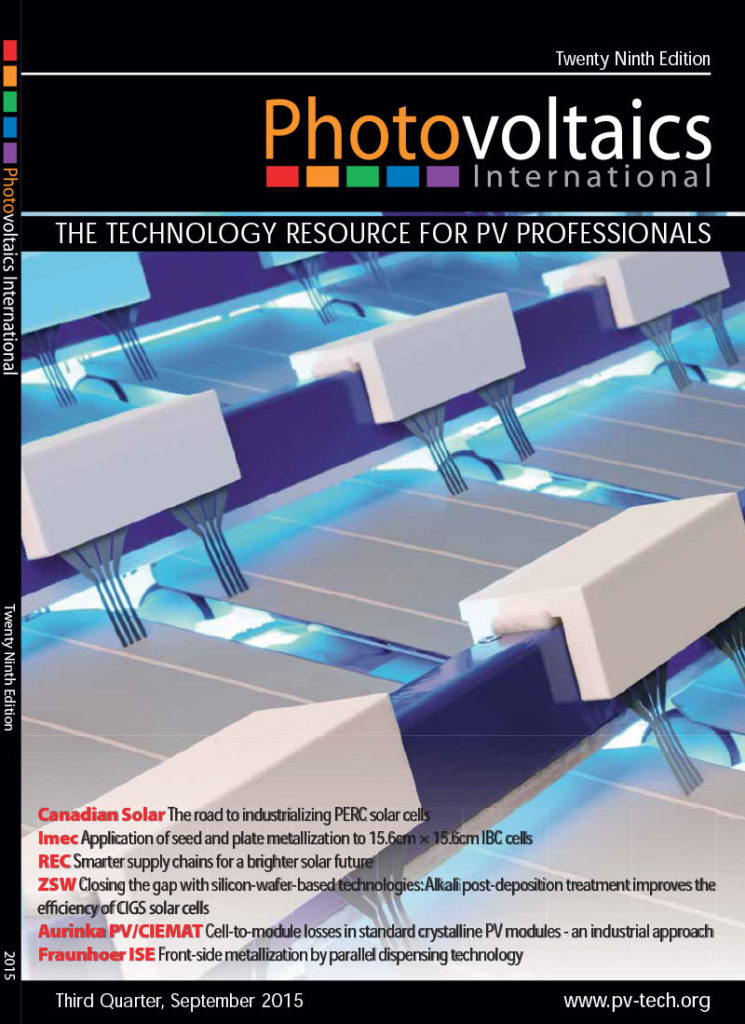 Forecasting the evolution of a young, dynamic industry is by definition an uncertain business, and solar is no exception. Rarely, if ever, do the numbers broadcast by any of the various bodies involved in the PV prediction game tally, and even historical deployment rates remain the subject of hot debate. The paradox is that getting forecasts broadly right is going to become increasingly important over the next few years, particularly for those involved in producing the equipment that will support whatever levels of demand come to pass. As discussed by Gaëtan Masson, director of the Becquerel Institute, on p.110 of this issue of Photovoltaics International, although global PV demand appears in rude health, complex political and economic conditions in many individual markets mean the question of how vigorously it will continue to grow in the coming years is less than clear. Yet for the upstream part of the industry, correctly forecasting PV market developments will be critical to ensure the right investments are made along the value chain in technologies that will help spur PV to new levels of competitiveness and thus drive continued demand. 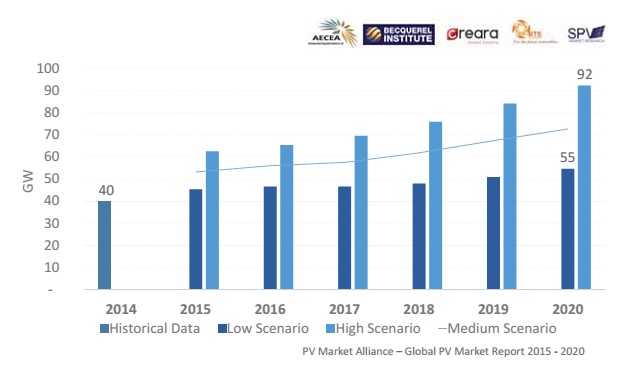 PV market evolution until 2020: The long quest for competitive PV

Market Watch, Photovoltaics International Papers
The global PV capacity reached 177GW at the end of 2014, and by 2020 the PV Market Alliance forecasts that 630GW of PV could be installed. The entire value chain of the PV industry needs accurate data and a clear vision of how markets could develop in the future in order to avoid repeating past mistakes, and especially the damaging price war that led to a dramatic industry consolidation. The question of PV market evolution will be acute in 2015 and 2017, which will represent the next two important milestones for PV development: for the first time in years, the PV industry could approach its production capacity limits. 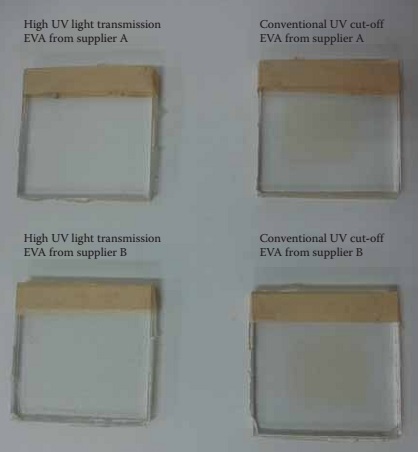 Photovoltaics International Papers, PV Modules
Newly developed high UV light transmission ethylene vinyl acetate (EVA) has recently been extensively introduced for use in PV modules. It has been proved that this type of EVA can result in potential power gain because of the better blue light response of the solar cell, which in turn can further reduce the cost per watt of the PV module. However, if only high UV transmission EVA is used as an encapsulant, too much UV light irradiates the backsheet, which can cause the backsheet to yellow. In order to improve the reliability and durability of the modules, SUNTECH, as a module manufacturer, therefore uses combined EVA, i.e. high UV transmission EVA as the front encapsulant and conventional UV cut-off EVA as the rear encapsulant, to protect the UV-sensitive backsheet. This paper presents the results of an investigation of the reliability and durability of high UV transmission EVA in PV modules, through an enhanced UV test which exceeds IEC standards. 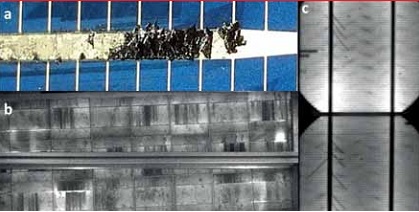 Photovoltaics International Papers, PV Modules
One of the main concerns of module manufacturers is the power loss that takes place when the solar cells are incorporated in PV modules. This power loss, known as cell-to-module (CTM) loss, results from the influence of many factors which occur during module production. Some of these factors lead to a gain in power at the end of the process; on the other hand, some are responsible for a loss of power and offset the positive effects of other ones, resulting in a net power loss. In this paper the CTM losses will be addressed from an industrial point of view and for standard crystalline PV modules. The focus will first be on some of the most frequent issues detected in production lines and their influence on module power loss. More extensive research is then carried out to arrive at an explanation of their origin. This paper describes some of the mentioned factors along with the different ways of detecting them. 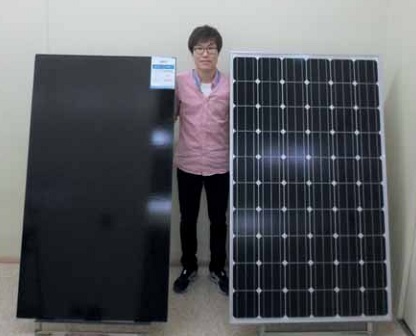 Fabrication of high-power CIGS modules by two-stage processing, and analysis of the manufacturing cost

Photovoltaics International Papers, Thin Film
Of the various copper indium gallium diselenide (CIGS)-formation processes, a so-called ‘two-stage process’, consisting of sputtering and selenization, has been successfully applied in large-scale production thanks to its stable process scheme and high-fidelity production equipment. A CIGS module with a power of 231W, corresponding to a total area-based efficiency of 16% for 902mm × 1,602mm, was demonstrated when this twostage process was employed in a pilot production line at Samsung (although all the technology concerning CIGS production has now been transferred to Wonik IPS, whose main business is to provide production equipment for the semiconductor and display industry). The high-power module suggests significant potential for CIGS modules to compete with multicrystalline Si modules in terms of both cost and performance. This paper addresses the important process technologies for achieving high efficiency on large-area substrates, and presents a cost analysis using the data obtained from the operation of the pilot production line. As a result of the synergistic effect of low material cost and high efficiency of the two-stage process, the CIGS manufacturing cost is expected to be reduced to US$0.34/W.

Photovoltaics International Papers, Thin Film
With the introduction of the alkali post-deposition treatment (PDT) for the absorber layer in Cu(In,Ga)Se2 (CIGS)-based solar cells, new efficiency records approaching 22% have become feasible. After gallium incorporation, sodium doping and the three-stage process, this is the next milestone on the CIGS roadmap. In this paper the current understanding of how PDT alters the CIGS surface and affects device parameters is illustrated. A comparative study of cell device parameters from ZSW and the evolution of efficiencies from other institutes and companies with and without PDT is presented. 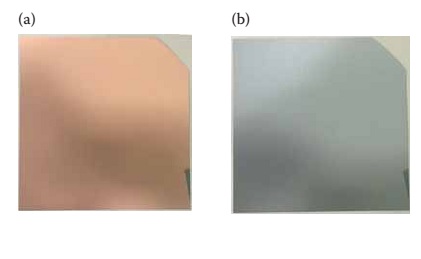 Cell Processing, Photovoltaics International Papers
Interdigitated back contact (IBC) Si solar cells can be highly efficient: record efficiencies of up to 25.0%, measured over a cell area of 121cm2, have been demonstrated on IBC solar cells by SunPower. The high efficiencies achieved can be attributed to several advantages of cells of this type, including the absence of front metal grid shading and a reduced series resistance. Several metallization schemes have been reported for IBC cells, including screen-printing pastes, and physical vapour deposition (PVD) metal and Cu plating with a suitable barrier layer. In the IBC process development at imec, upscaling from small-area 2cm × 2cm cells to full-area 15.6cm × 15.6cm cells was carried out. In the first instance the 3μm-thick sputtered Al metallization scheme from the 2cm × 2cm cells was adopted. This resulted in cell efficiencies of up to 21.3%, limited by a fill factor (FF) of 77.4%. Besides the limited conductivity of this metallization, the sputtering of a thick Al layer is not straightforward from an industrial perspective; moreover, an Al cell metallization cannot be easily interconnected during module fabrication. A Cu-plating metallization for the large-area IBC cells was therefore investigated, and the scheme is described in detail in this paper. A suitable thin sputtered seed layer for the plating process was studied and developed; this layer serves as a barrier against Cu and has good contact properties to both n+ and p+ Si. The sputtering of the various materials could cause damage to the underlying passivation layer and to the Si at the cell level, leading to a lower open-circuit voltage (Voc) and pseudo fill factor (pFF). Reduction of this damage has made it possible to obtain IBC cells with efficiencies of up to 21.9%, measured over the full wafer area of 239cm2. 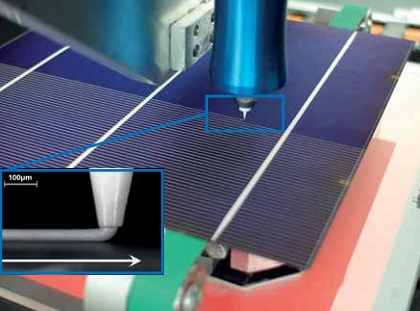 Cell Processing, Photovoltaics International Papers
Parallel dispensing technology as an alternative front-side metallization process for silicon solar cells offers the possibility of increasing cell conversion efficiency by 2% rel. by the use of commercial silver pastes designed for screen-printing technology. This efficiency gain is achieved through a significantly reduced finger width, and hence reduced shading losses, in combination with substantially improved finger homogeneities and high aspect ratios that guarantee sufficient grid conductivity at reduced paste lay-down. In this paper Fraunhofer ISE’s development of a parallel dispensing unit that is integrated into an industrial, inline-feasible platform made by ASYS is discussed. A possible industrial application of the dispensing technology is supported by latest results from pilot processing as well as by basic economic considerations 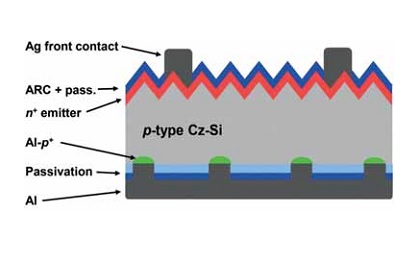 Cell Processing, Photovoltaics International Papers
The passivated emitter and rear contact (PERC) cell design is gaining acceptance in solar cell manufacturing because of its potential for high efficiency with p-type wafers and its easy integration into existing production lines. In terms of PERC mass production, an effective and reliable AlOx deposition tool is the most important aspect that needs to be considered. Light-induced degradation (LID) is a cell efficiency bottleneck because of bulk recombination, even if the silicon surface is well passivated. This paper examines the combination of cell efficiency, AlOx tool choice and LID regeneration as a route to industrializing PERC technology 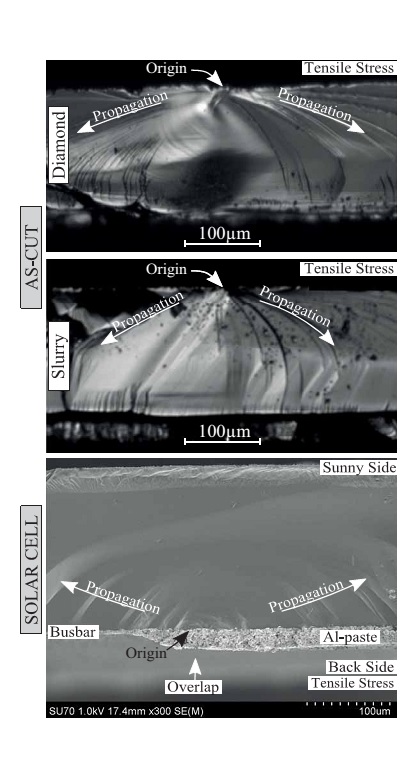 Materials, Photovoltaics International Papers
The mechanical strength of monocrystalline and multicrystalline silicon wafers is mainly dictated by the cracks induced during the wire-sawing process. Different sawing technologies, such as diamond-wire- or slurry-based processes, lead to different strength behaviours of as-cut wafers. Furthermore, the strength is strongly influenced by texturization, and at this stage can be interpreted as the basic strength of a solar cell. The metallization and firing processes determine the final strength and reliability of a solar cell, with the metallization contacts being the root cause of breakage of solar cells, depending on the particular cell concept. This paper gives a comprehensive overview of the typical ranges of strength for as-cut wafers, textured wafers and solar cells, for the two different sawing technologies. Around 100 batches with 4,253 samples were evaluated in the study. 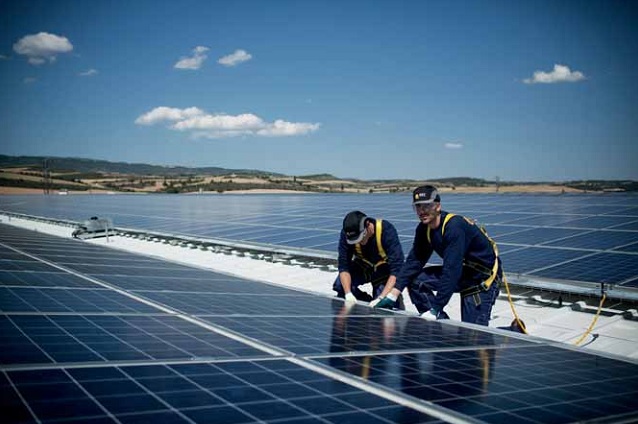 Fab & Facilities, Photovoltaics International Papers
As other entrants in the solar industry scramble to build greater efficiencies into their supply chain, the leading companies focus on manufacturing strengths such as zero-defect quality along the entire supply chain. When it comes to supply chain excellence, the solar industry as a whole is playing catch-up. However, there are players who have already made substantial progress here, having already adopted ‘lean’ practices to eliminate inefficiencies at source. REC, the largest European brand of solar panels and a world leader in the industry, is maintaining its strong position. The company’s practices and principles are explained in detail in this paper. 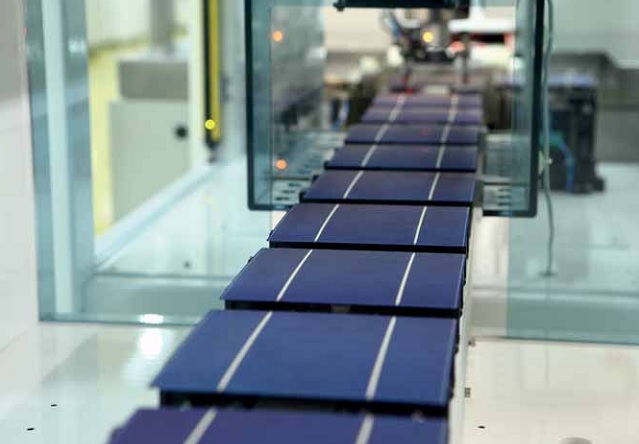 Fab & Facilities, Photovoltaics International Papers
In this quarterly report we will provide full first-half 2015 analysis that shows a massive shift in the geographical location of planned production plants, as well as details on key capacity announcements in the months of May and June. The analysis of April’s capacity announcements were reported in the previous quarterly report. Despite April announcements being so low, May proved to be a blockbuster month. The return of meaningful solar cell capacity plans reiterates the strength in the recovery and the first attempts for many years by leading PV manufacturers to rebalance cell and module production as next- generation PERC technology leads the cell rebalancing act. 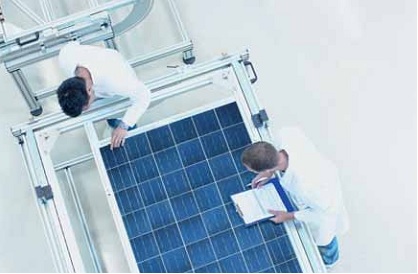 Fab & Facilities, Photovoltaics International Papers
R&D expenditure by major PV module manufacturers showed a remarkable turnaround in 2014. Previous reports had noted, especially in 2013, that R&D spending had not been immune to the PV industry’s period of profitless prosperity and was deemed a discretionary spend by the majority of leading producers. A return to profitability for many in 2014 resulted in a year of new record spending. There was record spending from 11 of the 12 companies covered, with Hanwha Q CELLS' spending actually declining in 2014.