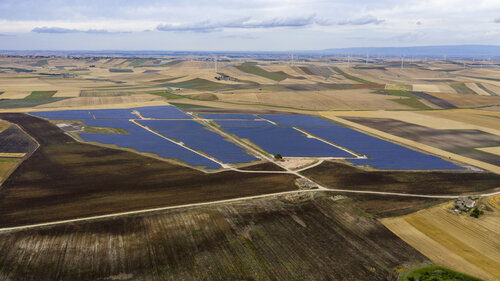 Developer European Energy has completed a 103MW solar farm in southern Italy, lauding it as the country’s largest to date.

And European Energy has claimed the use of cutting-edge solar technologies adopted in its development make it 50% more efficient than it might otherwise have been.

Construction of the project, located in Apulia, near Foggia, took one year to complete, and more than 400 people were involved in the construction phase.

It is expected to generate some 150 million kWh of electricity each year.

Migliorini said the project has 275,000 of the “latest generation modules” and was engineered and built “with the most advanced technology”.

European Energy told PV Tech that the modules seclected are Risen Energy’s 370Wp mono-PERC modules, which will be fitted onto a fixed substructure. Those modules have enabled the project to use half of the land compared to those featured in originally submitted designs.

“The park is 50% more efficient than a similar park with 5-year-old technology, which means that it will produce more energy in less space, reducing its footprint and landscape impact,” Migliorini added.

“We are ready to invest approx. €800 million in the next 5 years to develop other projects in Italy, where the sunny days and overall climate conditions make a Dane like me envious. This impressive solar plant in Italy is also a perfect example of European economic investment and cooperation,” he said.