Germany opens up its energy transition to international exchange 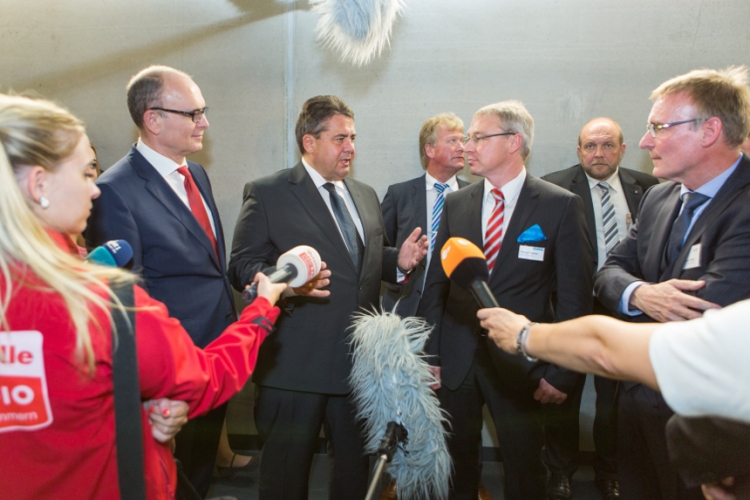 The second annual German government-backed event promoting discussion and exchanges of views on Energiewende ('energy transition'), the nationwide policy which has catapulted the country into a leading position on renewable energies including PV, begins today.

The launch of the event was marked with the publication of a report by the International Renewable Energy Agency (IRENA), scoping out the potentially huge economic benefits that could be achieved by doubling the deployment of renewables over the next 15 years.

The Berlin Energy Transition Dialogue is being hosted at the Federal Foreign Office in Berlin and will include – as with last year's iteration – an opening address from German vice-chancellor and economic affairs and energy minister, Sigmar Gabriel. Also appearing on the opening day will be foreign minister Frank-Walter Steinmeyer.

The event is also set to honour US sustainability guru Amory B Lovins, chief and founder of Colorado's Rocky Mountain Institute, with German federal level recognition, the O­fficer’s Cross of the Order of Merit of the Federal Republic of Germany. Lovins' group has advocated for sustainable solutions and a combination of renewable energy and energy efficiency to be deployable through market-based solutions. Lovins' best known work is perhaps 'Reinventing Fire', a book which mapped how the US could benefit economically, socially and environmentally from “seizing the opportunity” presented by the age of transitioning away from fossil fuels and high energy demand towards renewables and energy efficiency.

Similarly, in a recent interview with PV Tech, chief economist of the Underwriters' Laboratory, Erin Grossi, said that it is becoming clear now that while Germany has spent close to an estimated trillion dollars on its own Energiewende, the money spent is beginning to look more and more like an investment which is paying off, rather than a continuous raft of subsidies.

Ahead of the Berlin event, last night tIRENA presented its latest vision of how to most effectively increase the world's share of renewable energy via its REmap technology roadmap. The document advocates for technically feasible positions that could see, in its best case scenario, renewable energy become 36% of the world's overall energy mix by 2030, doubling it from around 18.4% in the present day.

The press briefing event was hosted by Germany's national trade association for solar, BSW Solar at its offices. IRENA director-general Adnan Z Amin and Dolf Gielen, director of the agency's Innovation and Technology Centre in Bonn giving a presentation on REmap, along with brief addresses from BSW Solar's Joachim Goldbeck and Herman Falk, chief of national renewable trade group BEE on the present state of renewables in Germany.

Amin said that the latest edition of REmap was put together through “intensive engagement with government experts” and analysis of real world situations was carried out to extrapolate from global trends.

The IRENA pair highlighted the advantages, both economic and social, of ramping up ambitions in renewable energy and energy efficiency worldwide, including the potential for saving 4 million lives a year lost to air pollution and the possibility of creating 24.4 million jobs in renewables by 2030.

The year 2030 will be critical for the type of sustainability and climate change objectives enshrined in the COP21 agreements, while doubling the annual global investment in renewables to US$770 billion while seeming expensive could ultimately result in benefits 15 times higher than the cost, Amin said.

Gielen reiterated Amin's point and also said that five key action areas identified by REmap should include better recognition that markets are currently “distorted” by subsidies for fossil fuels.

Even world PV leader Germany ‘could do more’

Perhaps surprisingly, Amin said – in a view later echoed by BEE's Herman Falk – that while Germany is a leader in renewables in many respects, more could be done even in the country where around 40GW of PV has been installed to date.

“Germany has been exemplary,” Amin said, but could do even better, including more being done in the end user and transportation sectors.

Falk also pointed out that despite its high proportion of renewables, Germany is among the leading countries in the world for energy security, suffering relatively few blackouts, just a few minutes each year. However, mobility, heating and cooling were all areas that needed work in the bigger picture, Falk said, expressing dismay that low global oil prices had led to an increase in thermal generation for domestic heating, for example.

From a solar perspective, BSW Solar president Joachim Goldbeck described German solar's successes and achievements, while pinpointing some of the barriers and challenges it still faces.

Amin had said at the beginning of the talk that the economic case for renewables was proving a game changer, especially in the US, where the issue of energy has traditionally been a highly politicised issue. Similarly, Goldbeck said that Germany's big utility companies had previously not wanted to engage with renewables, perhaps trying to ignore the competitive threat and changing technology landscape. E.On and others have since started racing into the renewables market, realising both that threat and the opportunity the new technology presents.

According to Goldbeck, politics has led the feed-in tariff to drop drastically, in 2012 plummeting from 30 Eurocents to 10 Eurocents a kilowatt. Interconnection to the grid is still more difficult than it should be, while anti-renewables lobbying and climate change denial are still prominently put before the public through the media. Goldbeck also called continuing “penalties” on self-consumption of on-site generated PV power “very strange” – PV users are limited in how much of their own power they are allowed to consume. The country also still needs a more coherently designed market for solar-plus-storage, Goldbeck said.

Nonetheless, Goldbeck finished on a high note by pointing out that the EEG, the surcharge payable by consumers to fund the Energiewende has now dropped significantly, with the avergae consumer's electricity price rising only EUR0.015 per gigawatt of new PV installations. Ownership of generation assets is shifting quickly by proportion too, with only 12% of renewable generation owned by utilities and as much as 35% in the hands of private individuals.

The Berlin Energy Transition dialogue can be followed via livestream on Thursday and Friday here.