Tripartite Chinese PV market; who is to lead in 2017?

After the 630 installation rush, enterprises, industry experts and investors began to think about the next trend for Chinese PV industry. It is predicted by senior staff from an investment company that 2017’s plant development would be tripartite, led by the 'Top Runner' (leading group) projects, distributed systems and poverty alleviating PV programmes.

Under this circumstance, whoever comprehends the game rule changes and meets all the requirements of the Top Runner projects is going to obtain the first-move advantage in the next key downstream market in the country.

The Top Runner project is a dedicated PV supporting programme initiated by China’s National Energy Administration (NEA) in 2015. The project is to facilitate the deployment of advanced PV technologies and the upgrading of manufacturing for the entire industry. It is hoped that this project could promote the transformation of domestic PV manufacturing from scale-expansion driven industry to a quality-and-efficiency driven one. In return, achieve the transformation from high subsidy and policy dependent operating mode to low subsidy and increased competitiveness mode.

After more than one year exploring and deploying the first Top Runner project base, Shanxi Datong National PV Demonstration Base on Coal Mining Subsidence – Phase I, recently witnessed its PV plants accomplishing grid-connection and full operation. As the first advanced technology demonstration base that has finished the whole process of being sanctioned, completed and grid-connected, its entire planning and construction procedure provides good technical and experimental references for other Top Runner projects.

It could be seen from the above three phases that Datong demonstration base has closely followed the two keywords – technology and FiTs in the hope of exploring the possibilities of reducing FiTs by technical upgrades. 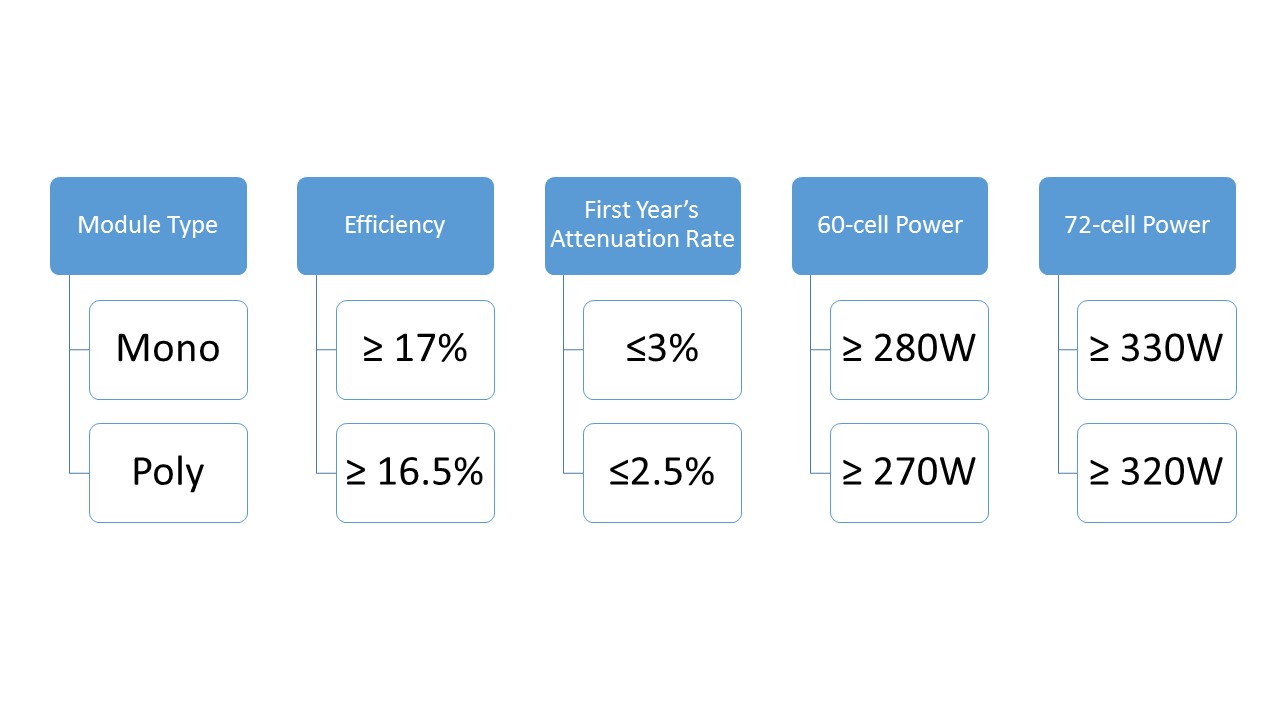 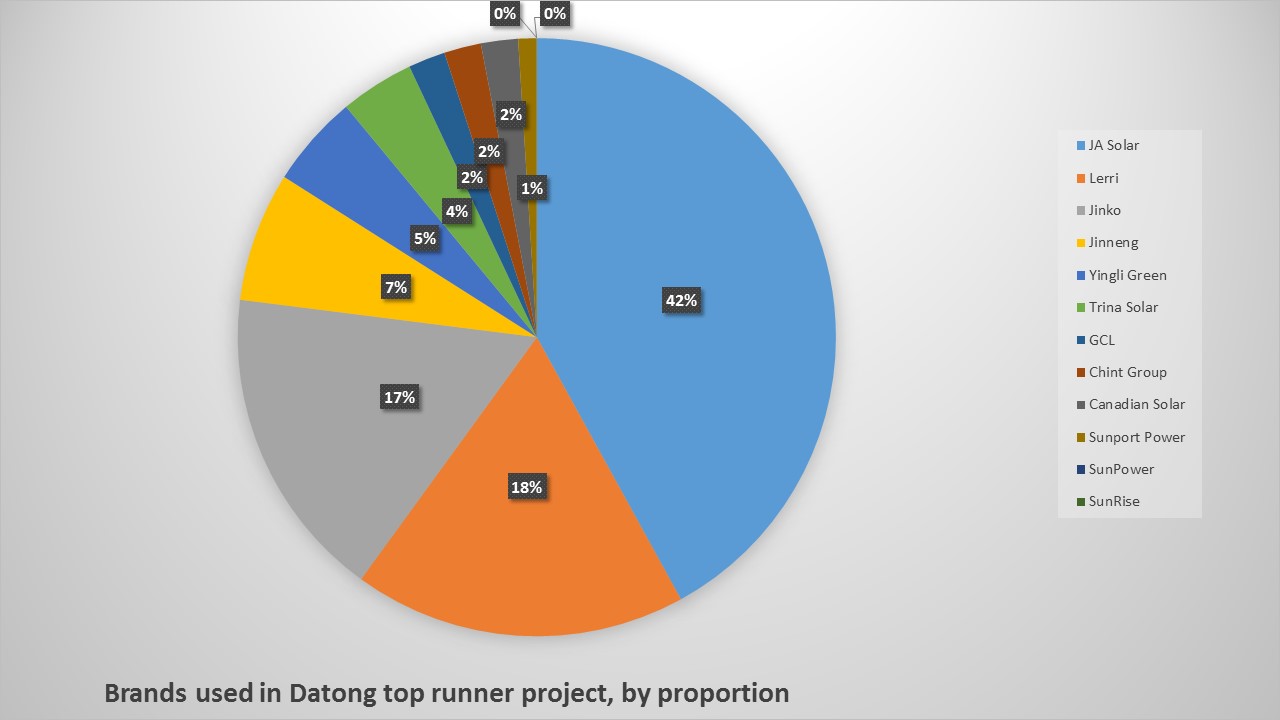 When looking at the detailed regulations in terms of advanced technologies, Top Runner projects expressly stipulate that polysilicon and monocrystalline PV modules must have conversion efficiencies of 16.5% and 17%, respectively (see Table 1). This compares with the average PV project only requiring 15.5% and 16% module efficiencies, respectively. The higher standards are expected to force PV companies to pay more attention to the unit cost and to develop more efficient products.

The results for Datong's 1GW phase 1 project was recently reported by PV Mates. A total of 12 companies module products stand out for deployment, within which JA Solar accounts for nearly half of the share, followed by Lerri and JinkoSolar. (See figure 1)

Known for its ‘high efficiency’ products, JA Solar currently has five module series that meet or exceed the requirements from the Top Runner project. Among the 420MW high efficiency PV modules JA Solar supplied to the Shanxi Datong demonstration base, a total of 150MW are 'Percium' brand  monocrystalline modules.

As of today, the efficiency of the Percium modules has reached 21%, making a 60-cell module possessing an output of 295Wp, and 72-cell modules generating 345Wp. It is also reported that Percium modules have better low light performance, lower temperature coefficient, lower LID and better anti-PID properties, compared to conventional module technology.

Yingli Green Energy was represented in the list with a 50MW module quota. This is viewed as good news for a company struggling with financial problems. Yingli Green has announced that its TwinMAX 60-cell (PANDA n-type monocrystalline) bifacial series glass/glass modules have been used in the plants in Datong. The module conversion efficiency was said to be as high as 18.8%.

Trina Solar also recently announced that its P-type mono-PERC cells (156x156m2) had reached 21.1% efficiency level in mass production, and the module utilising this cell have a power output of 300Wp.

Apart from those companies (JA Solar, Trina Solar, JinkoSolar and Yingli Green) which have ‘historically’ made modules, new comers such as Lerri, Jinergy Technologies, GCL System Integration and Sunport Power have also garnered attention. Lerri has primarily been promoting high-efficient monocrystalline modules that includes its new 'Hi-MO1' series in May, 2016. The modules are claimed to have an initial LID (Light Induced Degradation) rate more than 50% lower than average mono-module, with full-area efficiency as high as 18.35% and output of 60-cell modules reaching 300Wp.

President of Longi Solar, Li Zhenguo, told PV Tech that the situation for mono-silicon products’ deployment in the downstream markets has already shifted. To further promote the development of mono-modules at the end of 2016, Longi is planning to announce a new series of high efficient mono wafers with a 0.2% efficiency increase and less LID problems, assisting cells to break through the 20% efficiency barrier.

To better fit in the trend of new market development and advanced technologies, GCL recently announce that they would invest around US$1.6 billion on a 1,600MW high efficiency, differentiated solar cell plant, and a 250MW high-efficiency heterojunction cell line.

The above projects would utilise PERC technology, overlaid with black silicon technologies, N-type dual surfaced technology with efficiencies of 19.5-20.5% and 20-21%, respectively.

Inverter winners in Datong Phase I 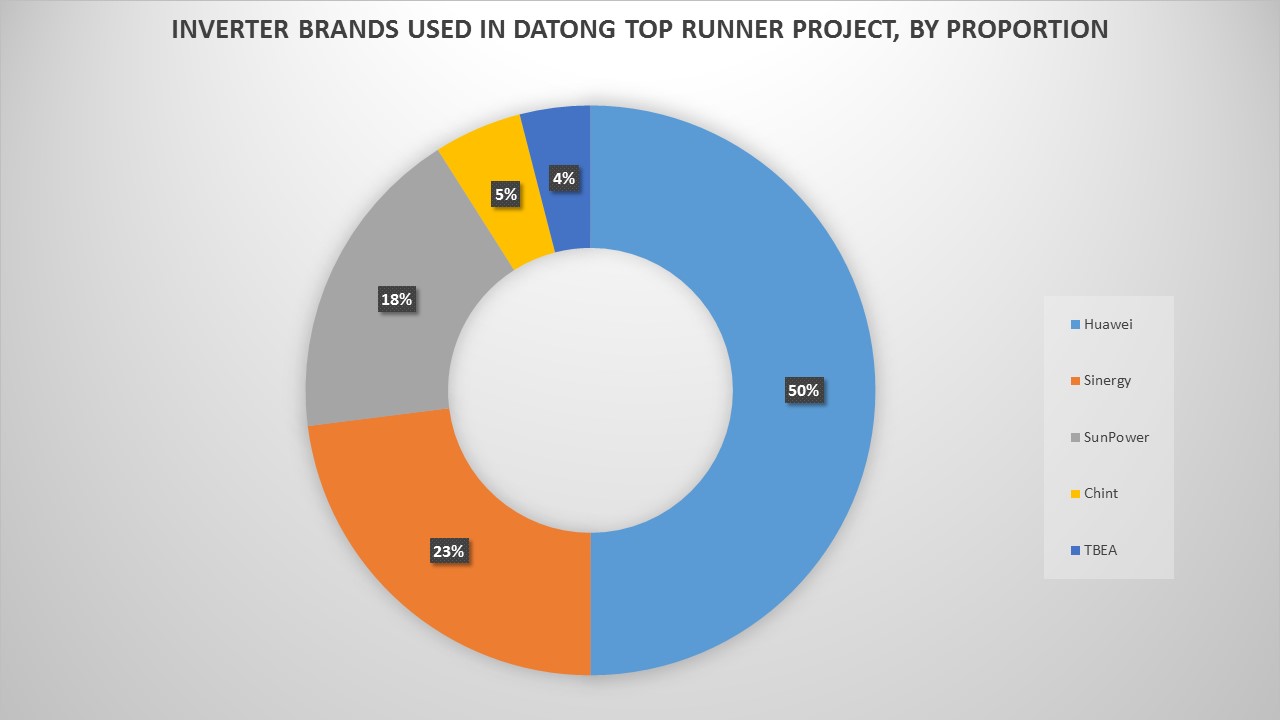 From the collected data, there are five inverter companies who meet all the requirements and have been selected for the Phase 1 Datong National PV Demonstration Base, which includes Huawei, Sineng Power, Sungrow, Chint, and TBEA (see figure 2).

Among the 1GW total of 13 projects, Huawei supplied 500MW, therefore accounting for 50% of the total amount, becoming the biggest inverter winner in this round of projects. Sineng Power came in as the second highest share with 231MW, followed by Sungrow in the third place with 184MW.

It is reported that Huawei inverters use Hisilicon chips and operation systems making power transforming devices into smart controllers. Huawei’s inverters meet IP65 standards, and have a fuse free/natural cooling design, to ensure a safe and reliable operation within products lifetime. The products also has 4 MPPT to minimize the effect of module miss-match, bringing the overall production of the plant up by 3%.

As one of the top telecommunication solution providers in the world, Huawei’s 4G-LTE broadband wireless communication technology and the PLC (power line communication) technology carried by its inverters could replace the traditional cable communication and RS485 communication based solution, avoiding risks of cable breakage and disruption by earth subsidence. This solution could save the cost on communication cables and installations, and also could minimize the complexity and duration for the plant construction.

In the Datong Top Runner PV project – Phase I, JA Solar and Huawei are beyond doubt the initial winners. Besides the Datong project there are four other PV base projects utilising advance technologies from Baotou, Yangquan, Jining, and Huainan-Huaibei that have recently been approved by the NEA.

Top Runner projects have presented an extended competition period with many key PV manufacturers making every effort to win new bids in the market and these are expected to be revealed soon.