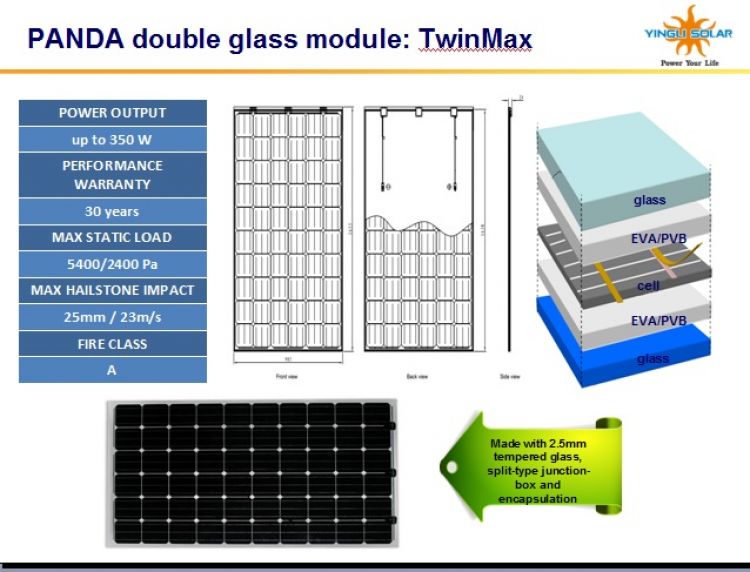 The plant has close to 400kW capacity, using 1,428 N-type silicon PANDA bifacial modules manufactured by Yingli, with a nominal peak power ranging from 275Wp to 280Wp each. It is expected that the annual energy production of the bifacial PV plant will exceed 400MWh.

Europe’s largest bifacial PV plant was developed in cooperation with Sparkling Projects and has been engineered by Schulz Systemtechnik BV who also did the installation.

The PANDA modules generate electricity from both sides of the panel; with the rear side making use of the reflected light from the surroundings and of diffuse light, the modules can yield up to 30% more energy compared to standard monofacial modules. They contain solar cells based on the n-PERT technology jointly developed by Yingli Solar, Tempress Systems and ECN.

The bifacial modules have a glass front side and a glass rear side with a 30-year-linear warranty exceeding the life time of standard modules. They also have been independently tested for harsh environmental conditions such as exposure to salt mist, ammonia and known potential-induced degradation (PID) risk factors. The modules are equipped with n-type crystalline silicon solar cells, which Yingli claimed perform better under low light conditions than regular p-type cells.

The modules are mounted on a fixed rack, which was specially designed for bifacial modules to optimize the rear side performance and are produced by Benz Alusysteme. Each module is equipped with micro inverters from APsystems to ensure optimal energy generation and monitor performance.