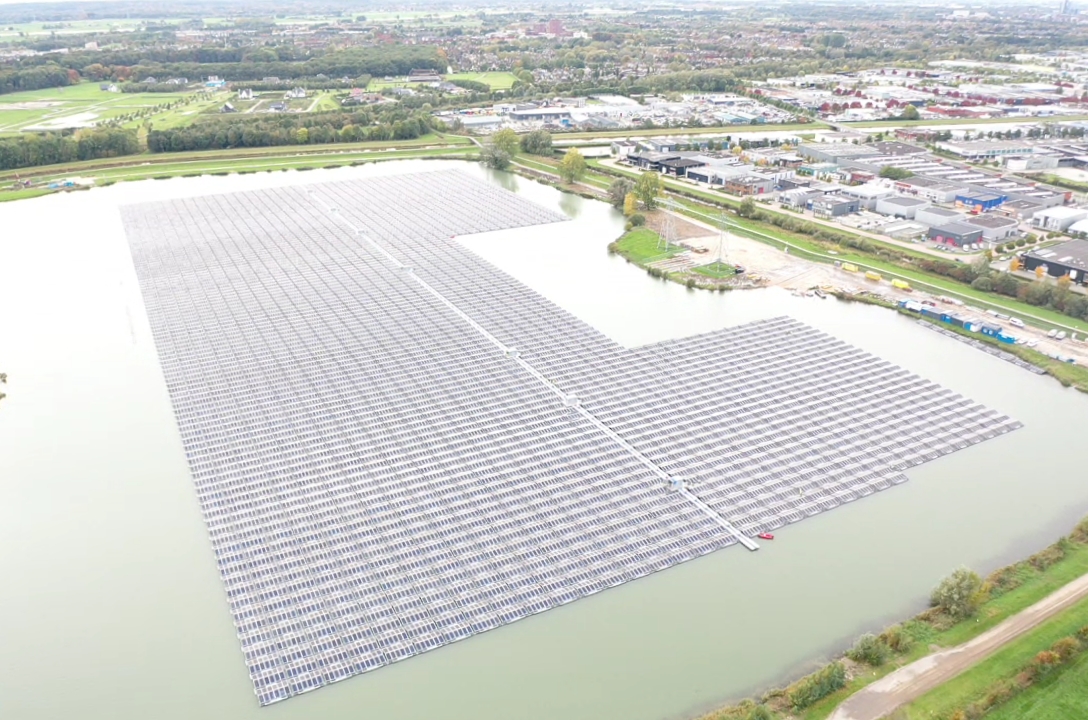 BayWa r.e. has taken two utility-scale floating solar projects to the finish line in the Netherlands, bringing a sizeable installed capacity boost to the segment in Europe.

The clean energy firm finished deploying the 14.5MWp Sekdoorn installation near the Dutch city of Zwolle in mid-October, about three months after completing 8.5MWp Tynaarlo in the neighbouring Drenthe province.

Dr Benedikt Ortmann, BayWa r.e.’s managing director and head of solar projects, told PV Tech this week the firm is now looking to connect both floating projects before year-end. Sekdoorn took, according to Ortmann, only two months to build.

The completion of 14.5MWp Sekdoorn and 8.5MWp Tynaarlo bring a second and third floating project to BayWa r.e.’s Dutch portfolio, following the wrap-up of the first – the 2.1MWp Weperpolder plant, in the Oosterwolde municipality – in December 2018.

As Ortmann explained, a larger successor is underway, also on Dutch soil. “We are working on a 27MWp project in the Netherlands,” he said. “We are waiting for the final building permit and are hoping to get it over the next few days or weeks, to begin construction.”

Rather than resorting to third-party blueprints, BayWa r.e. opted to develop its own designs for its floating installations. Created alongside specialist Zimmermann PV Stahlbau, the so-called Zim Float platforms take the form of square-shaped solar panel boats, with inverters floating alongside.

Sekdoorn’s floating transformers and anchoring system are also the work of BayWa r.e., according to Ortmann, while the inverters are Huawei’s 60KTL and 36 KTL and the modules GCL-SI’s monocrystalline, monofacial M6 72GF.

“For Sekdoorn, we have chosen glass-glass modules with aluminium frame as we are on water and those modules ensure a longer lifetime,” Ortmann said, adding that the 14.5MWp plant does not use PV trackers. “It is an east-to-west installation with [a tilt angle of] 12 degrees,” he noted.

Quizzed over project economics, Ortmann explained the firm has built its latest floating addition on its balance sheet. The group – which plans to sell both 14.5MWp Sekdoorn and 8.5MWp Tynaarlo by year-end – is currently in “late-stage” talks to secure project finance for the latter, he added.

According to BayWa r.e.’s managing director, the goal is now to go further with cost-competitiveness. “The costs for a floating system are 20-25% higher than for ground-mounted systems,” he remarked. “We are keen to bring those costs down to 10% higher in the mid-term.”

BayWa r.e.’s floating PV ambitions look set to breathe new life into the European segment. The continent has witnessed momentum as of late – with Akuo switching on 17MWp O’MEGA 1 in France last week – but its installations remain dwarfed by those on the works in Asia.

BayWa r.e. would consider deploying floating in Germany if the government acted to support the for-now pricier segment, Ortmann said, adding: “As the costs are 20-25% higher we are not able to compete with ground-mounted systems in [Germany’s solar auction] system.”

The firm believes the floating approach makes particular sense in Germany and the Netherlands, whose politicians want to drive a solar boom but continue to set restrictions for projects on land. In these countries, Ortmann said, the potential is “huge”.

“Where we have land conflicts floating becomes a promising solution,” he argued, pointing at Fraunhofer ISE’s finding of a 15GW technical potential for floating solar in Germany. The country could tap into it by allowing the segment to take part in clean energy innovation tenders, he said.

For BayWa r.e. and the other floating solar forerunners, a key success enabler in Germany and elsewhere is keeping capex costs in check. Quizzed at Intersolar 2019, the firm said its 2MWp first Dutch project had resulted in an estimated IRR of 5-8%.