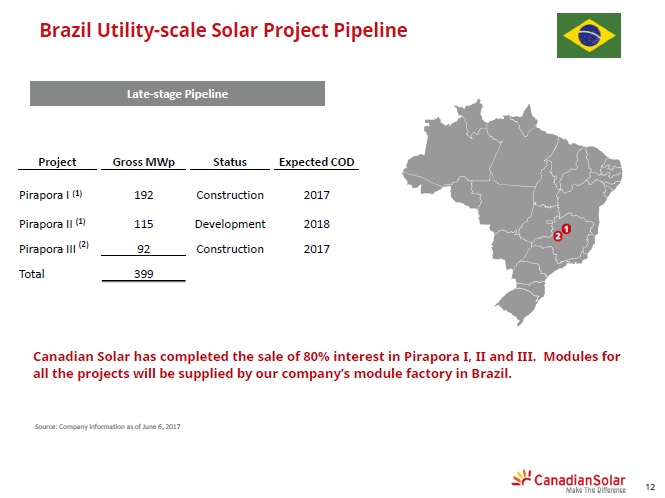 EDF EN has partnered with for two of our three of Canadian Solar’s projects planned in Brazil as part of auctions undertaken in Brazil last year. Financial details were not disclosed.

The Pirapora II project, which is located in the state of Minas Gerais in Brazil, was awarded a 20-year Power Purchase Agreement in the first Reserve Energy Auction and is expected to start construction in the fall of 2017 and reach commercial operation in 2018.

Canadian Solar noted that in October 2016, EDF EN do Brasil acquired 80% of its 191.5MW Pirapora I project, also located in Minas Gerais and adjacent to the Pirapora II project, providing a combined 306.5MW that constitutes one of the largest solar energy projects to date in Latin America.

PV modules for the projects are being supplied from Canadian Solar’s 380MW nameplate module assembly plant in Brazil, operated by OEM giant, Flex.

The company has a total of 399MW of ‘late stage’ PV power plant projects planned in Brazil.