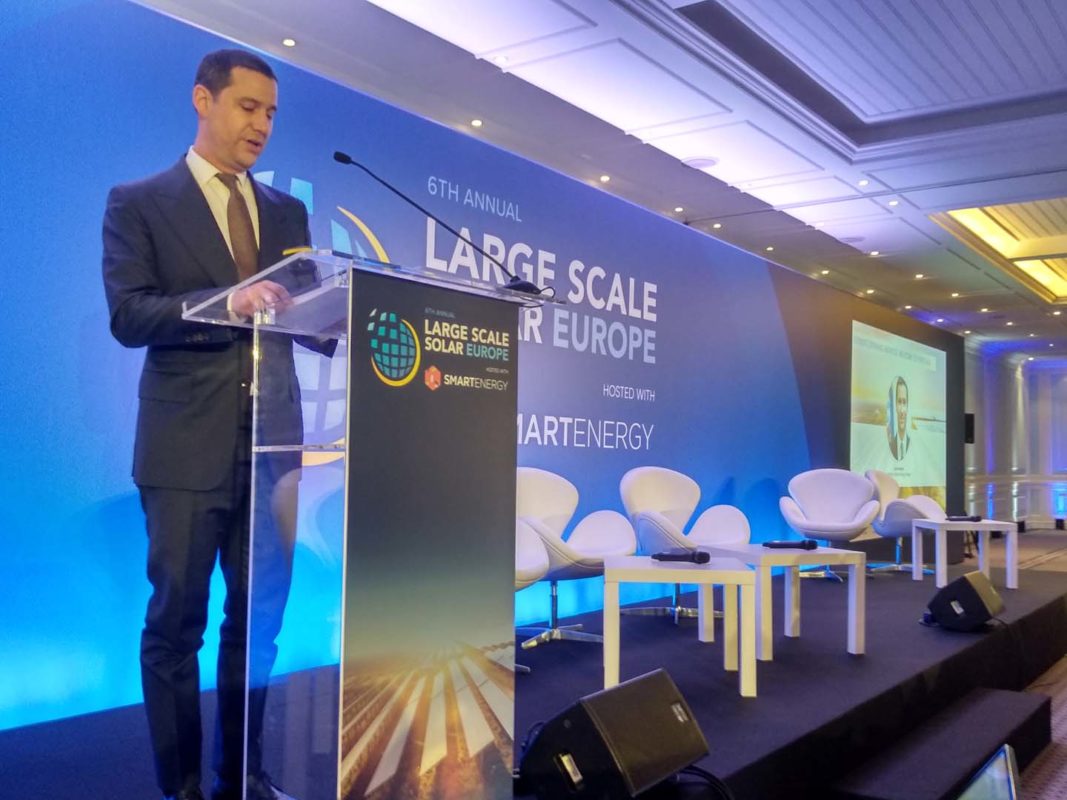 Investment A-listers gathered at the Large Scale Solar Europe summit have signalled their appetite for zero-subsidy plays, with some worrying however that government actions could put brakes on progress.

The two-day event in Lisbon, attended by top Portuguese and EU officials, saw representatives from Blackrock, Aquila Capital, Foresight and others map out their future moves in a continent now delivering large-scale projects on a market basis.

Panellists and live event polling both pointed at Spain, followed by Portugal, as the two most promising markets. “Both are perfect for zero-subsidy assets,” said Andrew Wojtek, director at Aquila Capital, speaking one week after his firm scooped up a 300MW PV pipeline in Spain. “Italy, and potentially also Greece, are on the horizon,” he added.

The focus on Spain and Portugal for now – eventually followed by Italy – was mirrored by Lorena Ciciriello, head of debt financing at NextEnergy Capital, and Blackrock director Giovanni d’Andria. “Sooner or later all markets will get there. We’re all here in the long-term so we’ll see unsubsidised projects coming through in the UK and the Nordics too,” d'Andria remarked.

Panellists acknowledged that fully reaping the fruits of subsidy-free solar will require a new mindset. “We’re becoming energy investors and that means taking a strategic view on what we’re buying into,” said Wojtek. The consensus was that to outcompete savvy utilities, investors must test what they know of grid constraints and pricing trends. “It’s become a power play,” is how speaker one put it.

Pitching Portugal’s solar credentials at the event was energy state secretary João Galamba. The country’s plans to install by 2030 some 7GW of new PV capacity – from less than 1GW today – will pose “obvious” technical, regulatory and political challenges but is above all an opportunity Portugal “welcomes and embraces”, Galamba said during his keynote speech.

“The end of government subsidies is not the end of government intervention,” Galamba continued as he addressed a crowd of developers and investors. His administration, he explained, will hold bi-annual PV auctions – 1.35GW will be tendered in 2019 – but also separate auctions for storage; legislation will help remove barriers to self-consumption and deploy smart-grids, he noted.

The enthusiasm of attending investors for Portugal’s zero-subsidy potential does not mean all were equally convinced by the government plans, however. Describing her firm’s “wait and see” stance, NextEnergy’s Ciciriello commented: “For Portugal, we’re evaluating more the private PPA route and won’t participate in auctions at this stage. It will depend on the fixed prices we see.”

Dr Benedikt Ortmann, managing director and head of solar projects at BayWa r.e, appeared even more skeptical as he explained why his firm opted for Spain and not Portugal as home to its unsubsidised 175MW Don Rodrigo project.

“Grid and a time-consuming process for permissions remain the top obstacles here, not so much PPAs as there is a lot of offtake,” he said. “It doesn’t as come as fantastic news to me to hear the government say they’re going to tender anyway. It’s not an ideal sign.”

The lender’s take on subsidy-free solar

The Lisbon event also opened the floor to lenders, a community that PPA experts have said can be tougher to approach for subsidy-free developers in Iberia.

The advice of Stirling Habbitts, project finance lead at Triodos Bank, was to engage as early as possible. “Some developers come to us with already signed PPAs and EPC deals. If there’s something we don’t like in the contract then negotiations have to be reopened. Much better to start the conversation on how you’ll sell the energy as soon as possible,” he said.

Lisa McDermott, executive director at ABN AMRO Bank, expressed herself in similar terms. “There is somewhat of a divide between banks, with some much more attached to subsidies and others willing to tolerate more merchant risk – it’s important to properly test banking appetite on each individual deal,” she remarked.

The panel showed debt players too are looking anew at Iberian solar, albeit with one eye firmly kept on risks. McDermott pointed at the 7% energy sales tax in Spain and the cannibalisation issues that could arise as renewables build up. “The lack of commercially viable co-location with storage is worrying given the penetration targets we’re seeing,” she said.

“We can’t see the future, only the past,” added Triodos’ Habbitts. “All banks know what happened in Spain, with the retrospective changes. My personal feeling is that it probably won’t happen again to the solar sector to such an extent.”