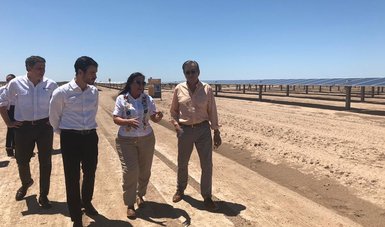 Mexico should aim to nurture a national solar industrial ecosystem to ensure it captures the full benefits of the renewable technology, a top government official has said.

At the opening of 162MWp La Orejana, Nahle said the country needs to focus on “national content” and set up an industrial ecosystem to ensure panels can be manufactured by Mexicans.

The goal, she was quoted in a statement as saying as she visited the site in the Sonora state, is to ensure “everything” – innovation, technology, added value – stays in Mexico.

Old auction winner is powered up in Sonora

The minister’s statement came as she toured 162MWp La Orejana alongside Adrián Katzew, CEO of the developer – Zuma Energía, owned by private equity outfit Actis – responsible for the project.

The plant, requiring a total investment of US$131 million, was bankrolled between American financiers Bancomext, Banobras, Nafin and Nadbank.

Renewables ‘can count’ on AMLO’s support

For Mexican solar, the ministerial blessing comes as the industry navigates an uncertain phase under the new government, with tender cancellations and question marks over old auction contracts.

At La Orejana’s launch, minister Nahle said renewable projects both public and private can count on the support of López Obrador’s administration.

The minister – a chemical engineer by training – acknowledged her government’s energy policy is “different” to that of its predecessor Enrique Peña Nieto, who legislated for sweeping reform.

Different, she added however, does not mean a “constrained, compressed or inhibited” policy, but rather a will to ensure “order” and “balance” so that production and construction remain equitable.

A feature examining the opportunities and risks of Brazilian and Mexican PV will be part of PV Tech Power’s Volume 20, scheduled for publication around September 2019. Subscribe for free now

11 October 2022
PV CellTech Extra will be held as a series of live webinars and on-demand sessions on 11-13 October 2022. We'll be taking a slightly further forward-looking view at the technologies and roadmaps for new cell architectures set to dominate mass production during 2023-2025 with special emphasis on the potential timelines for technologies beyond the single-junction cell design, including perovskite and hybrid concepts.
america, auctions and tenders, latin america, mexico, pv power plants, solar manufacturing, solar pv, storagelatam20, upstream pv, upstream solar