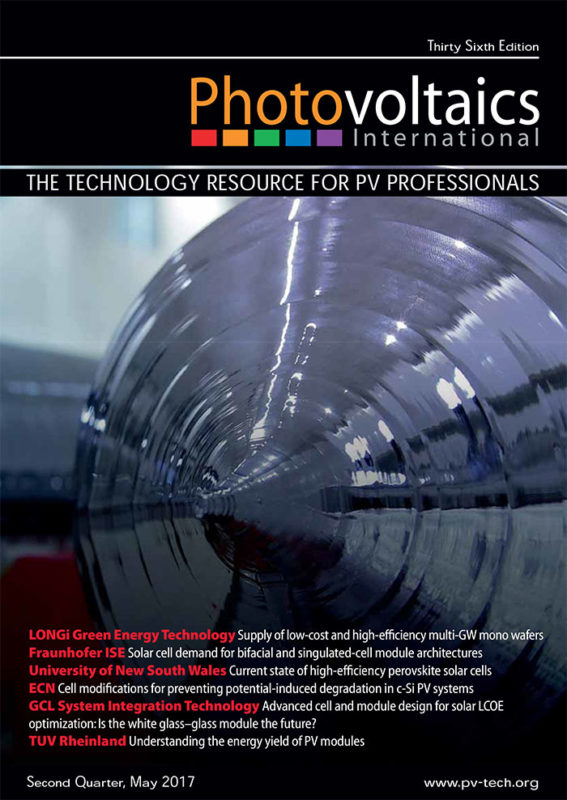 In this issue of Photovoltaics International Fraunhofer ISE presents a concept for a bifacial, shingled cell technology that it claims tracks a cost-effective route to a 400W module using existing industrial-scale concepts. Also one trend now much more than a notion is the ongoing switch to monocrystalline cell technology. Meanwhile the University of New South Wales pulls together and critically assesses the raft of research on perovskite PV technology. Following the success of our PV CellTech conference, we’re also introducing our new PV ModuleTech event focusing on the technology that turns completed cells into supplied modules in the commercial market. 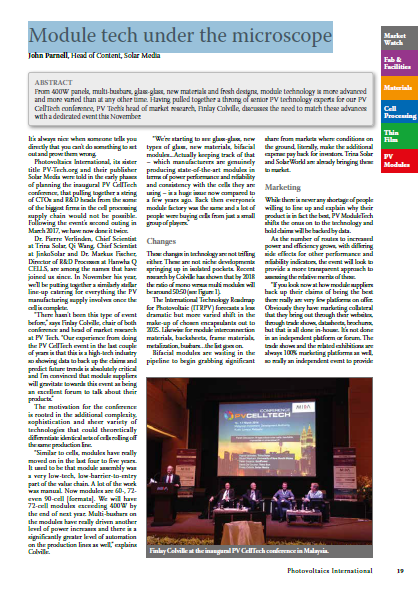 Module tech under the microscope

Market Watch, Photovoltaics International Papers
It’s always nice when someone tells you directly that you can’t do something to set out and prove them wrong. Photovoltaics International, its sister title PV-Tech.org and their publisher Solar Media were told in the early phases of planning the inaugural PV CellTech conference, that pulling together a string of CTOs and R&D heads from the some of the biggest firms in the cell processing supply chain would not be possible. Following the event’s second outing in March 2017, we have now done it twice. 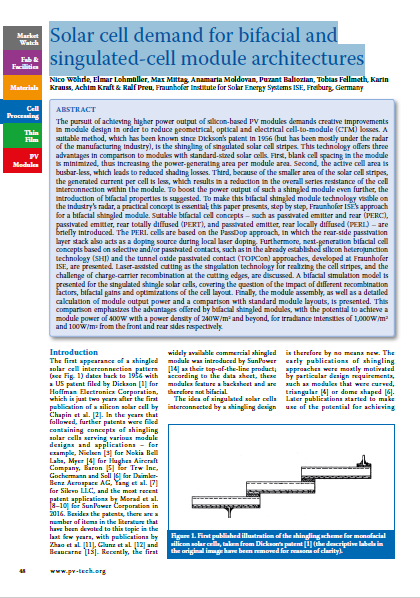 Cell Processing, Photovoltaics International Papers
The first appearance of a shingled solar cell interconnection pattern (see Fig. 1) dates back to 1956 with a US patent filed by Dickson [1] for Hoffman Electronics Corporation, which is just two years after the first publication of a silicon solar cell by Chapin et al. [2]. In the years that followed, further patents were filed containing concepts of shingling solar cells serving various module designs and applications – for example, Nielsen [3] for Nokia Bell Labs, Myer [4] for Hughes Aircraft Company, Baron [5] for Trw Inc, Gochermann and Soll [6] for Daimler-Benz Aerospace AG, Yang et al. 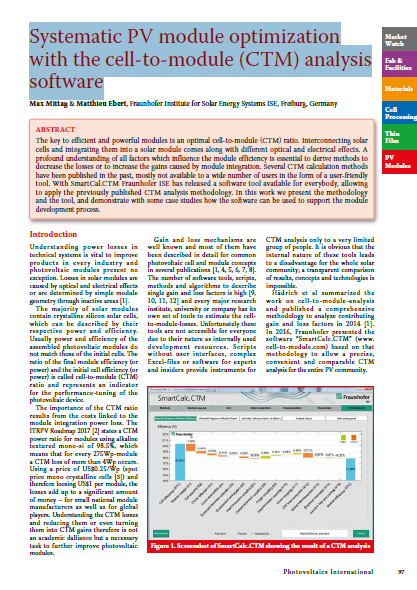 Photovoltaics International Papers, PV Modules
Understanding power losses in technical systems is vital to improve products in every industry and photovoltaic modules present no exception. Losses in solar modules are caused by optical and electrical effects or are determined by simple module geometry through inactive areas. 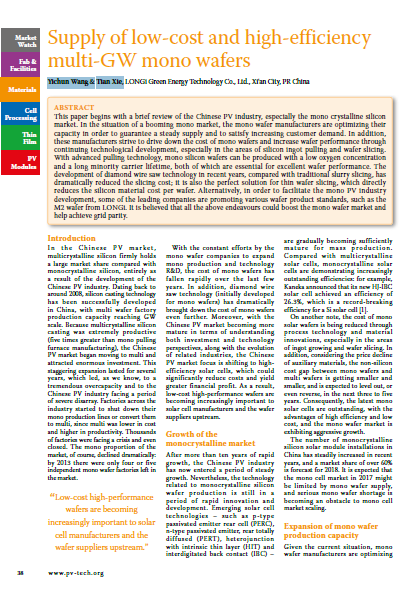 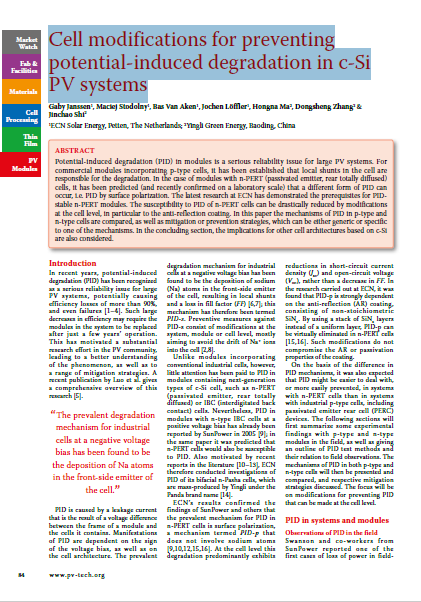 Photovoltaics International Papers, PV Modules
In recent years, potential-induced degradation (PID) has been recognized as a serious reliability issue for large PV systems, potentially causing efficiency losses of more than 90%, and even failures [1–4]. Such large decreases in efficiency may require the modules in the system to be replaced after just a few years’ operation. This has motivated a substantial research effort in the PV community, leading to a better understanding of the phenomenon, as well as to a range of mitigation strategies. A recent publication by Luo et al. gives a comprehensive overview of this research [5]. 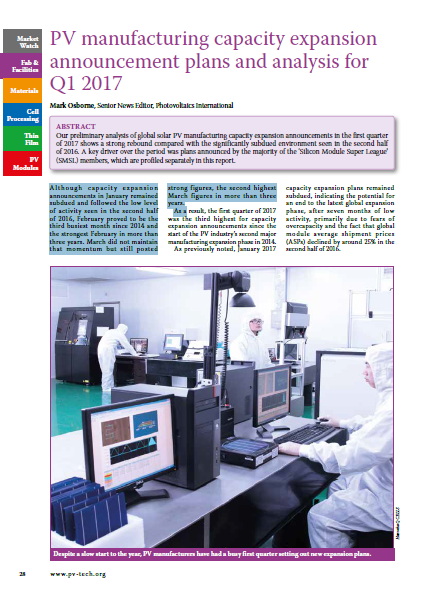 Fab & Facilities, Photovoltaics International Papers
Although capacity expansion announcements in January remained subdued and followed the low level of activity seen in the second half of 2016, February proved to be the third busiest month since 2014 and the strongest February in more than three years. March did not maintain that momentum but still posted strong figures, the second highest March figures in more than three years. 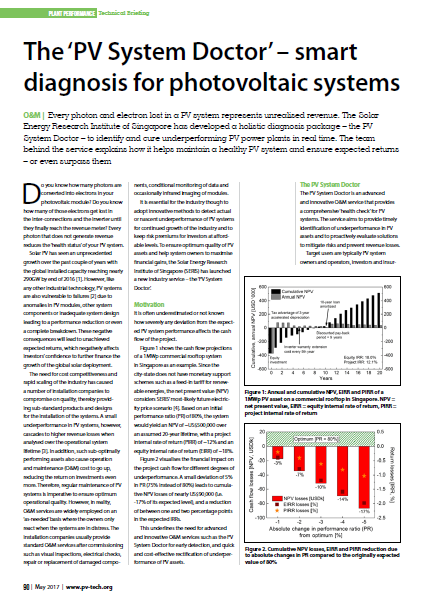 Plant Performance, PV Tech Power Papers
O&M | Every photon and electron lost in a PV system represents unrealised revenue. The Solar Energy Research Institute of Singapore has developed a holistic diagnosis package – the PV System Doctor – to identify and cure underperforming PV power plants in real time. The team behind the service explains how it helps maintain a healthy PV system and ensure expected returns – or even surpass them