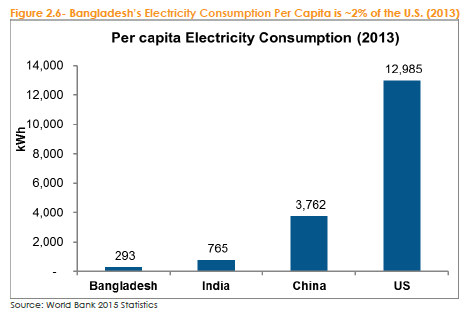 Bangladesh plans to double fossil fuel generation capacity to 24GW by 2021, but the dangers of dependence on conventional energy generation can be avoided through energy imports and solar, according to a new report from the Institute of Energy Economics and Financial Analysis (IEEFA).

The Asian country is one of the most densely populated on Earth so land availability is a key constraint to solar progress. A 2015 Sustainable & Renewable Energy Development Authority (SREDA) report found that if agricultural land is avoided, space for only 1.4GW of solar power plants is available.

However, IEEFA has recommended an annual solar target of 1GW to reach 10GW by 2025, requiring 20,000 hectares of land, which is 0.15% of Bangladesh’s 13.2 million total. The Institute believes that SREDA’s assumption that only 2% of non-agricultural land will be suitable for utility-scale solar power development is too conservative and that more land has the potential for such developments than is currently acknowledged.

IEEFA also noted: “It is imperative that the government targets use of non-arable wastelands via the establishment of Solar Industrial Parks with government sponsored grid transmission connectivity, as is being pursued in India.”

A boost for the country’s solar ambitions could well come in the form of Indian conglomerate Adani, which has confirmed keen interest in setting up large-scale solar PV plants in Bangladesh, but this is still in a conceptual stage of development.

A total of seven utility-scale solar projects have been initiated in the last two years in Bangladesh, but the government must clearly endorse big solar ambitions to accelerate such developments.

The firm also said that once scale has been achieved, tenders equivalent to US$0.07-US$0.075/kWh should be achievable, and should reduce 5-10% annually. This compares favourably to IEEFA’s calculated cost of US$0.093/kWh for new, imported coal-fired generation.

To complement the solar focus, it was recommended that country increase energy imports from Bhutan and India.

In other segments, Bangladesh already has the most successful distributed generation solar programme in the world sponsored by the Asia Development Bank, with 4.5 million off-grid solar rooftop systems deployed. There is scope to accelerate this program and rapidly deliver on the government program of electricity for all by 2021.

Elsewhere, there is significant scope for distributed residential rooftop solar in urban areas, as well as on commercial and industrial (C&I) buildings, avoiding the complexities and costs of land acquisition. Solar hybrid for water irrigation pumps and telecom towers systems all shows significant promise.

German firm Astronergy recently said it will equip 8,500 post offices in Bangladesh with PV modules and a battery pack to power computers, scanners and printers. 1,500 solar plants have already been installed, and the entire project of the Bengali Ministry of Post and Telecommunications is to be completed by early 2018. The Bangladesh government has invested US$20 million in this initiative.