The global solar industry could enter the terawatt era by as early as 2022, but only if national governments set appropriate, post-COVID stimulus measures in motion.

That is the key takeaway from SolarPower Europe’s (SPE) 2020 Global Market Outlook, released today, which also warns of a 4% contraction in solar deployment as a result of the global pandemic.

The Outlook places solar deployment for 2019 at 116.9GW, representative of a 13% increase on deployment the year prior. That figure is broadly in line with numbers presented by both the International Energy Agency, Bloomberg NEF and IHS Markit which placed 2019 PV deployment at 114.9GW, 118GW and ~120GW respectively.

IRENA continues to be the outlier, having in April forecasted 2019 solar deployment to have stood at just 98GW.

SPE’s figure is doubly significant considering that it has enabled solar to be responsible for just under half (48%) of all new power generation installed last year, while also setting a new record for solar installations.

But according to SPE’s analysis, installations are set to contract by around 4% to 112GW – the figure included in the trade body’s medium scenario – as a result of a fall in demand and labour and logistics issues posed by the ongoing COVID-19 pandemic. This is representative of a substantial decline on the 144GW figure forecasted for 2020 by SPE last year, signalling the extent at which the pandemic has stymied growth in key markets.

The rebound could, however, be just as stark providing governments around the world opt to make renewables central to post-COVID economic stimulus packages. Such policy programmes hold the potential to light a fire under global solar development, triggering a prospective 34% leap in installs to 150GW next year.

This could be followed by a further 168GW in 2022, enough added capacity to take worldwide solar capacity over the 1TW threshold just four years after it celebrated surpassing 0.5TW. 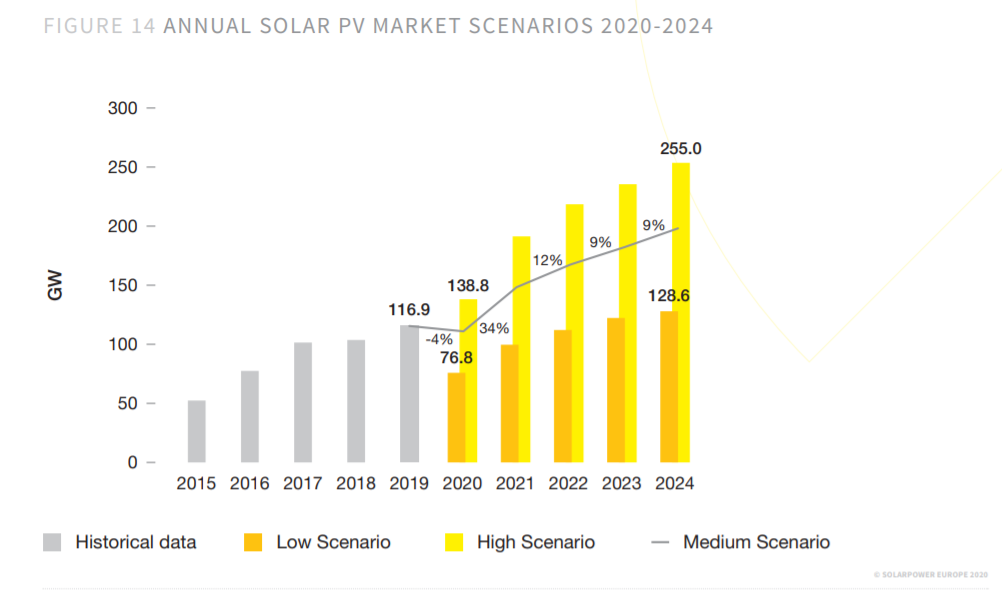 Michael Schmela, executive advisor and head of market intelligence at SolarPower Europe, said the high scenario could result in a global annual market of up to 255GW by 2024.

“But that would be the optimal case, where policymakers in the key markets decide to reap the benefits of solar and place it high on the agenda in their COVID-19 economic recovery packages,  which not only would help economies to bounce back; it would also help those countries progress in meeting their energy and climate targets.

“The low-cost, scalability, and job-richness of solar makes it an obvious contender to lead the energy transition and help guide economies into a climate neutral era,” he added.

Noting how prevalent solar PV had become in numerous markets – a total of 16 countries added more than 1GW of solar capacity last year, up from 11 countries in 2018 – SPE president Aristotelis Chantavas said solar’s low coast and versatility had aided its “rapid expansion” into new markets.

“It is good to see new markets strongly committing to a solar future… These are very encouraging developments, paving the way for the solar decade ahead of us,” he said.