SunPower to sell more assets to avoid bankruptcy in 2019 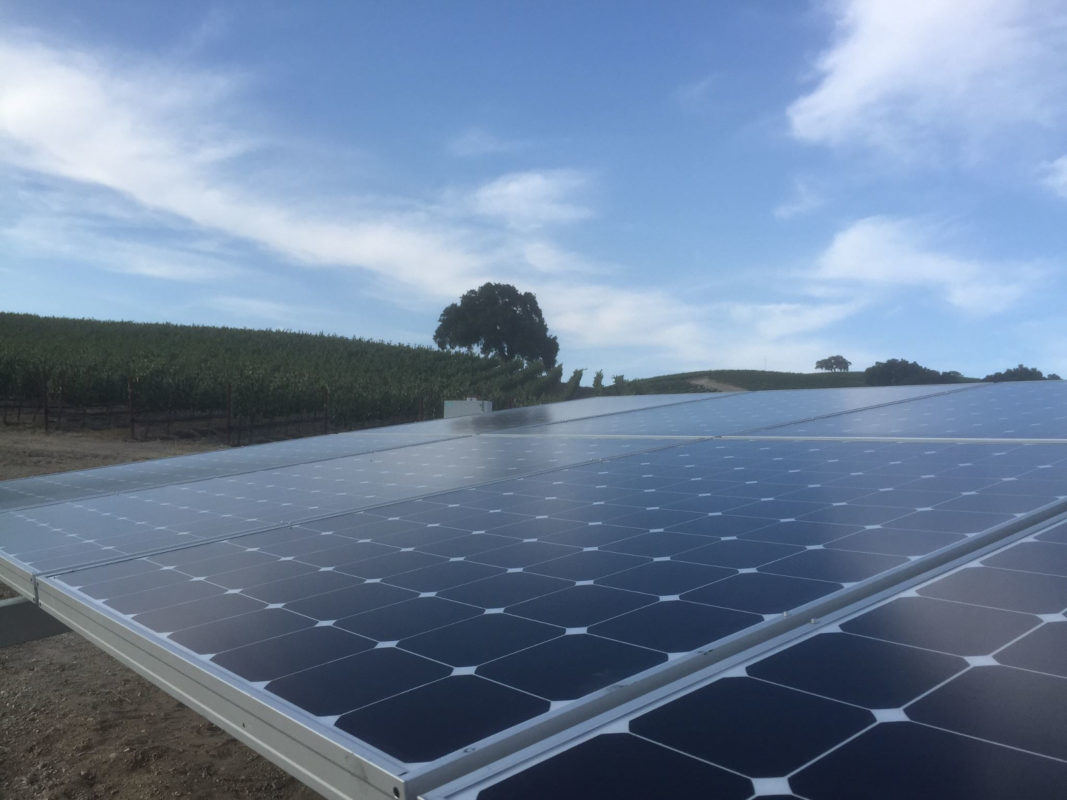 US-headquartered high-efficiency PV module producer SunPower Corp is expecting to sell further assets and increase its loans in 2019 to avert bankruptcy due to looming liquidity issues as the company expects to remain loss making next year, while current net losses in the first nine months of 2018 have reached US$745.3 million.

SunPower stated in its third quarter 2018 financial report that it “may not have the liquid funds necessary to satisfy its estimated liquidity needs within the next 12 months.” Adding, “In conjunction with evaluating its ability to continue as a going concern for the twelve-month period subsequent to the issuance date of these interim financial statements, the Company has evaluated its expected future cash flows, and considered its historical ability to divest certain investments and non-core assets and secure sources of financing in connection with its short-term liquidity needs.”

SunPower has already sold key assets, such as yieldco, 8point3 Energy Partners, and its microinverter business to Enphase Energy.
The company said it would “sell a portion of its equity interest in the residential lease portfolio,” to improve liquidity and had entered into a mezzanine loan agreement of US$110.5 million with Hannon Armstrong in August, 2018.

SunPower also expects to secure an additional source of financing through another mezzanine loan of approximately US$27.0 million with interest of around 11.75% per annum.

The company also noted that it could borrow up to US$95.0 million under its revolving credit facility with Credit Agricole Corporate and Investment Bank.
Should these measures not be adequate to provide short-term liquidity, SunPower said it would consider deferring or cancelling uncommitted capital expenditures.

Although the restructuring efforts first announced in late 2014 included job losses, actual employment levels increased through 2016, only falling in both manufacturing and overall numbers in 2017. 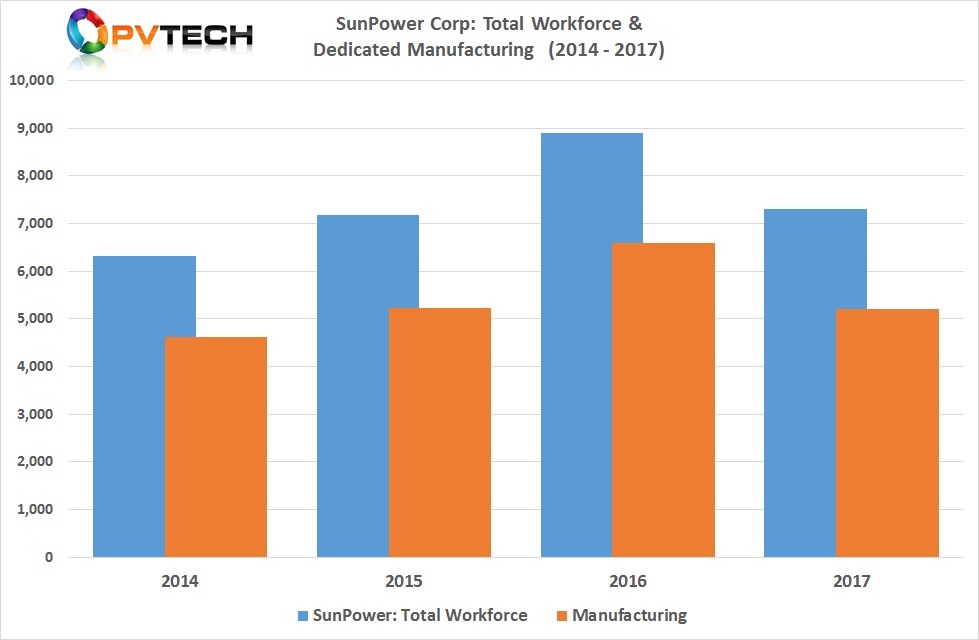 During the first quarter of 2018, SunPower announced plans to cut between 150 and 250 non-manufacturing jobs, which is which is expected to be completed by mid-2019 at a cost in the range of US$20 million to US$30 million.

In announcing third quarter 2018 results, SunPower also said it would be transitioning to a new upstream and downstream segmentation for greater financial reporting transparency.

The upstream businesses will come under SunPower Technologies (SPT), which includes R&D and manufacturing operations, but also strangely includes global sales and marketing.

In the downstream segment, dubbed SunPower Energy Services (SPES) will include its North American residential and commercial businesses. No reference was made to utility-scale PV power plants. Overall, it was not clear if the business unit realignment would include further job losses.
The changes will be implemented from the fourth quarter financial results onwards.

SunPower reported third quarter 2018 GAAP revenue of US$428.3 million, compared to US$449.1 in the previous quarter and just above the low-end of guidance. 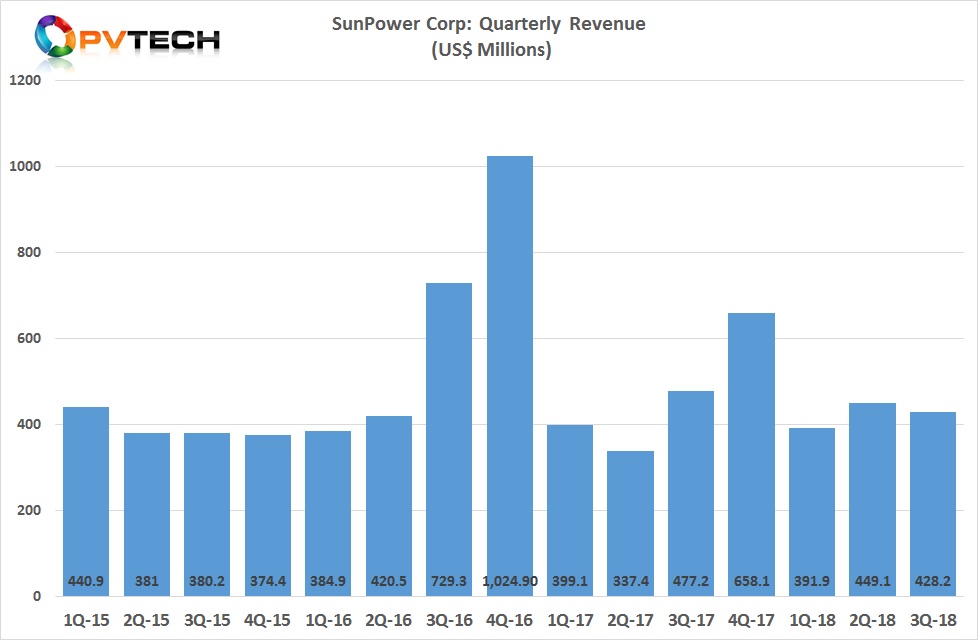 Revenue in its Power plant segment was US$103.6 million, compared to US$108.6 million in the previous quarter. However, gross margin for the segment was negative 2.1% and has been negative in the first three quarters of 2018.

The company noted in its earnings call that Power plant revenue was below target for the quarter, due certain international project delays because of the rapidly decline ASPs and developers holding back until prices stabilised. This related mostly to its P-Series modules from its China JV.

The negative gross margin was said to be due to a one-time US$8 million retrofit charge for one of SunPower’s previously developed power plant projects. The company did not specify which project the charge was related to or what modules had been used.

Commercial segment revenue was US$144.6 million, up from US$133.3 million in the second quarter of 2018. Gross margin fell into negative territory for the first time in 2018 at a negative 3.6%, compared to 6% in the previous quarter.

The only profitable segment in the third quarter was residential, which reported US$195.3 million in revenue with gross margin of 14.4%. However, gross margin was 21.8% in the previous quarter on revenue of US$205.2 million.

Overall, margins were being impacted by Section 201 import tariffs on modules. However, the company recently announced it had been successful in its bid to be excluded, which will have a positive impact on margins going forward.

Total gross margin in the reporting quarter was 2.3%, a significant improvement from negative 69.1% in the prior quarter.

On a megawatt deployment basis, the commercial segment had the highest deployments of 138MW, while power plants totalled 90MW and residential was 83MW. Total deployments were 346MW, down from 385MW in the second quarter of 2018.

Total net losses for the first nine months of 2018 have reached US$745 million. 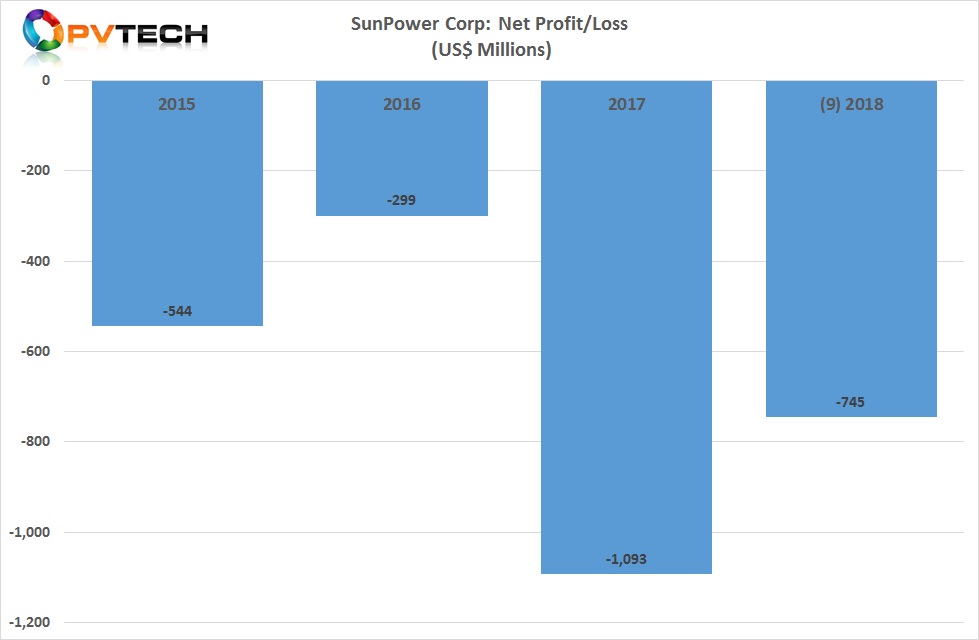 Cash and cash equivalents continued to decline quarter-on-quarter to US$220.8 million, compared to US$256.7 million in the previous quarter. 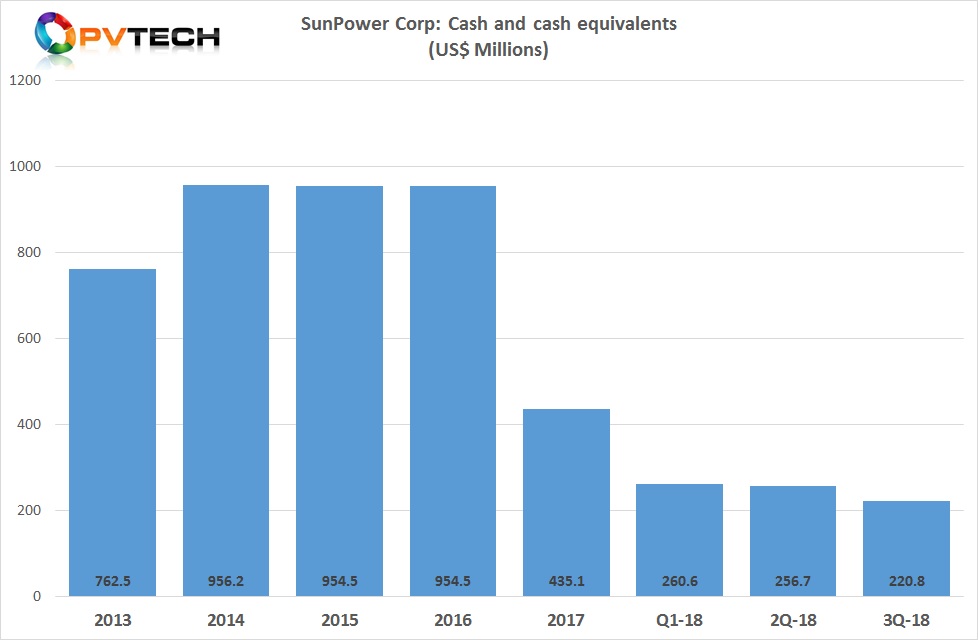 SunPower guided fourth quarter GAAP revenue in the range of US$460 million to US$510 million, the highest level in 2018.

Full year GAAP revenue was revised down to be in the range of US$1.7 billion to US$1.8 billion, compared to US$1.6 billion to US$2.0 billion. This is due primarily to lower than expected deployments which were guided at 1.45GW to 1.55GW, compared to previous guidance of 1.5GW to 1.9GW.