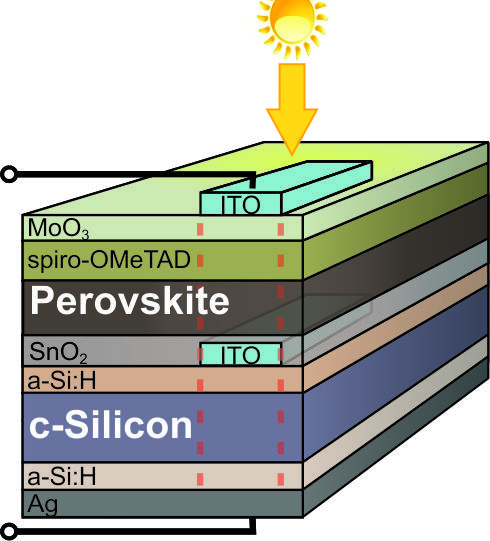 Teams from solar cell research institute Helmholtz-Zentrum Berlin (HZB) and the university École Polytechnique Fédérale de Lausanne (EPFL) in Switzerland have combined a silicon heterojunction solar cell with a perovskite solar cell monolithically into a tandem device and reached a record efficiency of 18%, claiming it has the potential to hit 30% after further modifications.

Perovskite layers absorb light in the blue region of the spectrum, which means they are useful to combine with silicon layers that mostly convert long-wavelength red and near-infrared light.

However, constructing these two types of cell in tandem is difficult, because high efficiency perovskite cells tend to require coating onto titanium dioxide layers, which must first be sintered at around 500 °C. The amorphous silicon layers that cover the crystalline silicon wafer in silicon heterojunction degrade at this temperature.

Now a team headed by Bernd Rech and Lars Korte at the HZB Institute for Silicon Photovoltaics in cooperation with HZB’s PVcomB and a group headed by Michael Graetzel at the EPFL have managed to manufacture this kind of monolithic tandem cell.

They deposited a layer of tin dioxide at low temperatures instead of using titanium dioxide. A thin layer of perovskite could then be spin-coated onto this intermediate layer and covered with hole-conductor material. The team also used a transparent protective layer to avoid the metal oxides sputtering and consequently destroying the perovskite layer and hole-conductor material.

The teams now claim there is even potential to reach efficiency levels as high as 30%. The latest efficiencies do not appear to have been verified by a third party, but findings have been published in the journal Energy & Environmental Science.

Steve Albrecht, a postdoc in the group of Bernd Rech, who developed the device design of the tandem cell, said: “The 18% efficiency we measured is certainly very good, but light is still being lost at the surface in the present architecture.”

He added that a textured foil on the front side might be able to catch this light and couple it into the cell, which would further increase the cell’s efficiency. The heterojunction silicon solar cell that simultaneously functions as the bottom cell and the substrate for the perovskite top cell also has potential for improvement.

Lars Korte, head of the silicon heterojunction solar cell group at the Institute for Silicon Photovoltaics, said: “This perovskite-silicon tandem cell is presently still being fabricated on a polished silicon wafer. By texturing this wafer with light-trapping features, such as random pyramids, the efficiency might be increased further to 25% or even 30%.”

Rech said that most important step is to integrate the perovskite layes into existing technology where silicon technology holds a 90% share of the market.

He added: “The perovskite layers could considerably increase the efficiency level. To achieve this, the fabrication techniques only need to be supplemented with a few more production steps. For that reason, our work is also extremely interesting for industry. However, the problems of long-term stability and the lead content of perovskite solar cells still need to be solved in future research.”

The 18% efficiency fo the new tandem cells is 20% higher than that of individual cells and the open-circuit voltage is 1.78 volts. Albrecht commented: “At that voltage level, this combination of materials could even be used for the generation of hydrogen from sunlight.”