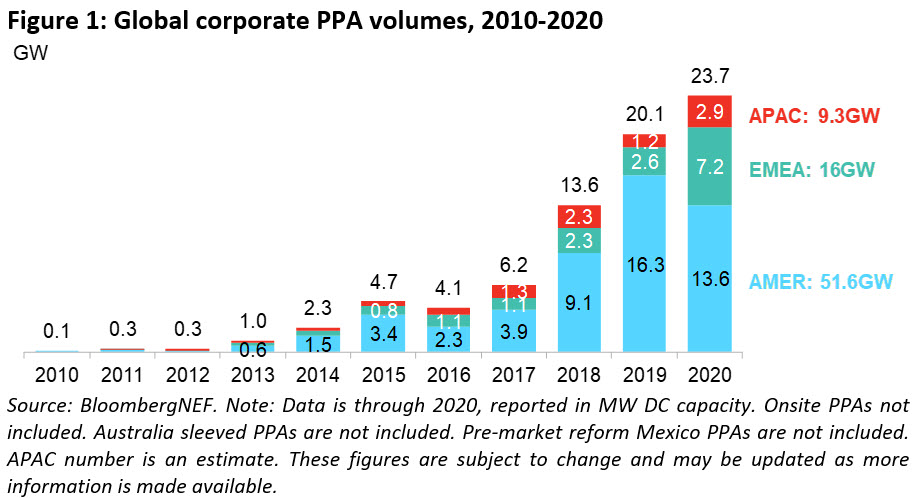 Tech companies, oil and gas groups and automakers bought 23.7GW of renewable energy through long-term agreements last year, up from 20.1GW in 2019 and close to double the 13.6GW purchased in 2018, a report from BloombergNEF has found.

Clean energy contracts were signed by more than 130 companies throughout 2020. Amazon was the biggest offtaker of renewables, procuring 5.1GW though 35 separate power purchase agreements (PPAs), including 3,092MW of solar, which makes it the corporate leader in solar PPAs. The company claimed to become the world’s largest renewable energy backer last year, with a total renewable capacity of 6.5GW globally. Oil and gas company Total came a close second, buying 3GW of solar power last year. With ambitions to become net zero by 2050, Total’s renewables strategy has seen it announce plans to cover all the electricity consumption of its European industrial sites from solar power by 2025.

Kyle Harrison, BNEF senior associate and the lead author of the report, noted that the economic upheaval caused by the COVID-19 pandemic dented corporate confidence in new investments. “Internal corporate functions were disrupted on the outset of the pandemic, and many companies saw revenues plummet as global economies buckled.”

However, he noted the continued, albeit slower, growth of offtaking last year is “testament to how sustainability is on many corporations’ agendas.” An earlier report from LevelTen energy found that COVID-19 had a minimal impact on the overall PPA market’s growth.

Although the US retained its position as the top market for corporate PPAs, BNEF’s report found that it is losing market share to competitors in Europe and Asia Pacific. The US and Latin America saw 13.6GW of renewable energy assigned through corporate PPAs last year, down from the 16.3GW recorded in 2019. This was down to a 2.2GW decline in PPA activity in the US, which dominates the renewables market in the region by a wide margin. Last year also saw deal volumes in Mexico “all but dissipate”, the report said, due to government policy. By contrast, PPA volumes in the Asia Pacific and EMEA regions more than doubled in 2020, 1t 2.9GW and 7.2GW respectively.

In Spain, companies announced contracts to purchase 4.2GW of clean energy, it said, up from 300MW the previous year. BNEF attributed the growth to Spain’s highly “competitive” renewable energy prices thanks to its recent rapid solar scale-up. Corporations such as Total and AB InBev, it said, are securing cross-border virtual PPAs in Spain to offset their load elsewhere.

In Asia, BNEF predicts that South Korea will be the continent’s “next major corporate procurement market” due to policy revisions at the start of this year which enable companies to purchase “unbundled certificates and retire them against sustainable commitments”.

29 November 2022
PV ModuleTech EMEA in Madrid on 29-30 November 2022 will address the factors underpinning the changing PV module landscape, gathering together all the key stakeholders across the value-chain from module production to field testing. Join us for presentations from the leading players in the sector, clearly identifying the opportunities and challenges set to impact module supply to Europe and the Middle-East over the next few years.
amazon, corporate ppas, europe, finance, investment, oil and gas, power purchase agreements, ppa, pv power plants, solar, solar pv, total, utility-scale solar