However, Daqo expects full-year polysilicon production to be in the range of approximately 37,000 to 40,000MT, including annual facility maintenance later in the year. The company reiterated it was still on track with capacity expansions with its Phase 4A project that should complete construction by the end of 2019 and ramp up to full capacity of 70,000 MT by the end of the first quarter of 2020.

Longgen Zhang, CEO of Daqo New Energy said, “We are currently undertaking a capacity debottlenecking project to gradually upgrade several older CVD furnaces with improved technology, allowing us to increase production capacity by additional 5,000MT. This project is progressing well and we expect to complete the project ahead of schedule in early June 2019. The ramp-up process of this debottlenecking project will temporarily impact production volumes and cost.” 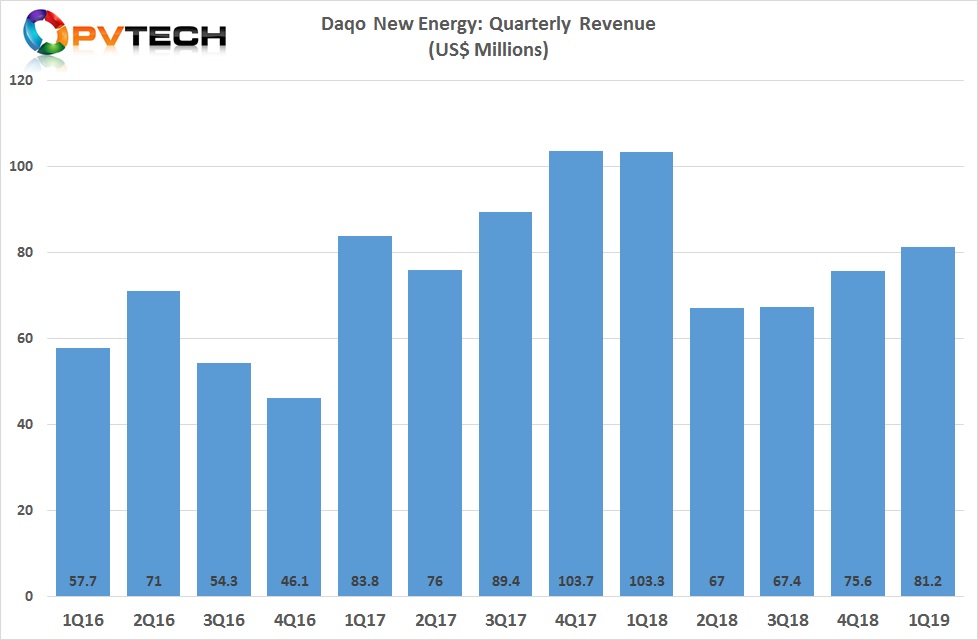 Gross margin was 22.6%, compared to 22.4% in the fourth quarter of 2018 and 45.0% in the first quarter of 2018. The company said that the sequential increase was primarily due to lower average polysilicon production cost, partially offset by lower ASPs.

Daqo reported polysilicon production volume of 8,764MT in the reporting quarter, compared to 7,301MT in the previous quarter as the company ramped production and maintained full capacity, which also included reducing total production costs to US$7.42/kg, a new record low.

Daqo reported external polysilicon sales volume of 8,450 MT in Q1 2019, compared to 7,030 MT in the previous quarter, another new record for the company.

Daqo said that due to the upgrades and debottlenecking it expected to produce approximately 7,200 to 7,400MT of polysilicon in the second quarter of 2019. This would lead to slightly higher total production costs of US$8.0/kg to US$8.5/kg.

The Company expects the total production cost to fall back to around US$7.5/kg in the third quarter of 2019.