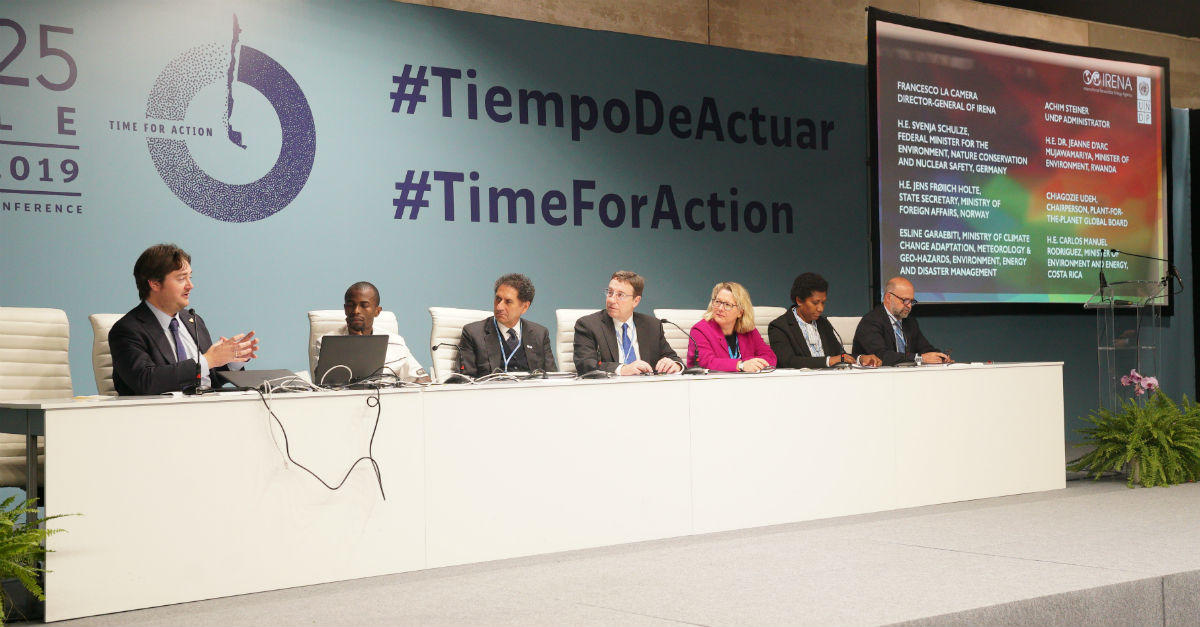 World organisations have taken the floor at the COP25 conference to help countries seize terawatts-worth of untapped renewable potential, and bring climate goals within reach.

The United Nations and the International Renewable Energy Agency (IRENA) will offer their assistance for countries to embark on a “massive and immediate” scale-up of green energy efforts, under a plan the duo showcased at the UN climate talks in Madrid on Wednesday.

As both organisations noted, world nations have in 2020 a chance to aim higher with renewables. Under the Paris Agreement on climate change, each country has the option to revise its Nationally Determined Contribution (NDC) – with actions on green energy and others – next year.

The NDC plans put forward by countries in recent years have failed to reflect that renewables are growing faster than expected, IRENA said. Should the roadmaps remain in their current form, the green energy goals they set for 2030 would already be met by 2022, the agency added.

According to IRENA’s estimates, the room for greater ambition is major amongst the world’s top economies. China's NDC is, for one, failing to capture 2TW in renewable potential by 2030, while the US and India could respectively host an extra 730GW and 340GW by that year.

The calls on countries to step up efforts on climate change have been ubiquitous over the past few years. As the UN itself warned this year, global greenhouse gas emissions keep rising year-on-year and must now drop by 7.6% annually if the world is to ward off the worst of rising temperatures.

Boosting renewable roll-out to the point where Paris goals can be met – and destructive global warming prevented – would require US$110 trillion in funding between 2016 and 2050, IRENA said, noting however that much of it could be unlocked if countries axe fossil fuel subsidies.

The challenge to raise huge volumes of green energy finance could ease if the star measure of this year’s COP debate comes to pass. So-called Article 6 talks are exploring the possibility of a UN-supervised global carbon market, some of whose proceeds could go towards renewables.

Whether the world’s top emitters are ready to ramp up renewable ambitions, and invest accordingly, remains to be seen. US solar firms are locked in policy disputes against their own government, while their Chinese peers are witnessing a major slowdown of installations.

From Repsol to EDP, Enel, Iberdrola, Ørsted, SSE, Statkraft and Verbund, energy majors have signalled their will to play their part in the renewable transition. Some moves have been branded “greenwashing” by campaigners, who point at these firms’ still large fossil fuel portfolios.

See here for more information on the UN/IRENA joint initiative on NDCs under the Paris Agreement on climate change.