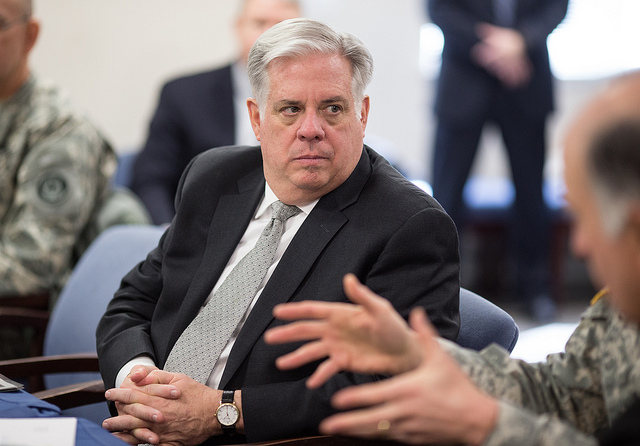 On Tuesday Hogan announced his environmental agenda for 2017, which featured a focus on clean energy jobs and renewable projects. What was lacking however were explicit mandates for wind and solar, as Hogan labelled such technologies as “expensive”, whilst insinuating that they were being “forced” upon consumers.

This sentiment aligns with the governor’s energy decisions in May when he vetoed the Clean Energy Jobs RPS Revisions bill that would have increased Maryland’s renewable energy target to 25% by 2020 and created thousands of jobs, particularly in solar.

Further, Hogan said around US$41 million will be invested solely in renewable projects through the Strategic Energy Investment Fund as part of the deal with utility Exelon that was agreed in its state merger settlement. There is also a proposal for a Clean Cars Act 2017 which would increase investment in the electric vehicle (EV) tax credit scheme by more than 30%, whilst doubling the current charging station rebate.

A further initiative seeks to form a US$7.5 million collaboration between the University of Maryland Energy Research Centre and the state Clean Energy Centre to create the Green Energy Institute. This organisation would solely be used as a vehicle to attract private investment and commercialise clean energy innovations.

The Clean Water Commerce Act will allow US$10 million of the Bay Restoration Fund to be used to purchase nutrient reduction credits enabling the state to meet 2025 watershed goals.

“The proposals in our package are innovative, forward-thinking solutions to ensure that Maryland continues to lead the way to safeguard our environment,” Hogan said in a statement. “I look forward to working with legislators to get these common sense measures passed. We owe it to the next generation to continue to find cost-effective ways to protect Maryland’s environment and stimulate economic growth.”

Attending a press conference surrounding the new proposals, the Republican defended his decision to veto last year’s energy bill by citing a hefty tax burden as his reason for defaulting on the legislation.

“It's charging people every month on their bill to force people to buy expensive solar and wind energy,” Hogan told reporters. “We don't need this bill to pass. We've already made tremendous improvements. We're already better than most places. The things we talked about today help accomplish those goals without charging Marylanders, and I'm just opposed to the sunshine and wind tax.”

However, the legislation containing the so-called “sunshine and wind tax” could very well pass if lawmakers choose to override Hogan’s veto when they reconvene later this month for the new legislative session.