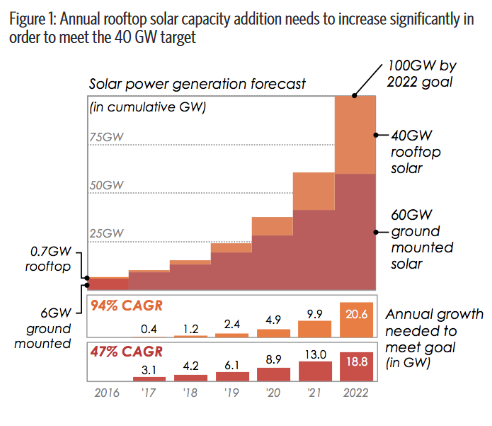 Third party financing could support more than half of India’s solar rooftop segment by 2022, but several policy initiatives must be introduced to make this model attractive, according to a report from advisory organisation the Climate Policy Initiative (CPI).

India’s rooftop sector growth rate is well below what is required to meet the 40GW by 2022 target set by the Central government, according to the report, ‘The Drivers and Challenges of Third Party Financing for Rooftop Solar Power in India’. However, various policy measures and incentives could help support the third party financing model, which could then drive the whole rooftop sector.

Third party financing is a key model because it can address the concerns of resdiential as well as commercial and industrial consumers in having to invest high upfront costs to install rooftop PV systems. Under this model, consumers can buy electricity from a developer who installs, owns and operates a rooftop PV system on the consumer’s property using a power purchase agreement (PPA) model. This shifts the financial responsibilities from the consumer to the developer.

The report stated: “Savings in the cost of electricity for the consumer is the most significant driver for the adoption of rooftop solar power.”

Third party financing currently accounts for 102MW of installed capacity in the country, which is 13% of the rooftop sector. The report says that industry believes this could rise to more than 20GW by 2022.

However, there are three major challenges to boosting the uptake of this financing.

A limited access to debt financing is the dominant issue as banks remain reluctant to lend to rooftop solar projects because there are high perceived risks and limited information on the performance and track records of rooftop solar investments. To alleviate this, CPI said the Ministry of New and Renewable Energy (MNRE) could introduce a training system for bankers on how to better assess loan applications for rooftop solar.

Consumer credit risk is the second problem, because there is a low availability of credit assessment procedures, low enforceability of agreements, and costly legal processes in the event of a dispute. To reduce this consumer credit risk, MNRE and state governments could include distribution companies (Discoms) as a party to the PPA between the developer and the consumer. Discoms could then terminate the consumers’ power supply in the event of a default in payment, which would incentivise timely payments.

Finally there are challenges with net metering implementation, although a report from consultancy firm Bridge to India recently said that net metering is improving across the country. CPI said MNRE could offer rooftop solar power a higher Renewable Purchase Obligation (RPO) credit to incentivise Discoms to focus on rooftop ahead of other renewable sources. 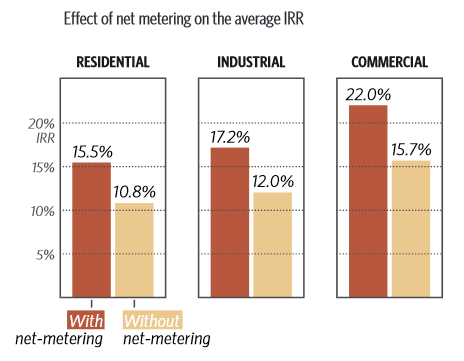 It also cited the ‘The Rooftop Solar Private Sector Financing Facility’, and a ‘Rooftop Solar Investment Trust’ (RSIT), which could also help increase the availability of both debt and equity for rooftop solar power in India.

Research for the report was conducted by Sandeep Gupta and Jai Sharda at Equitorials, under guidance from Gireesh Shrimali at CPI.