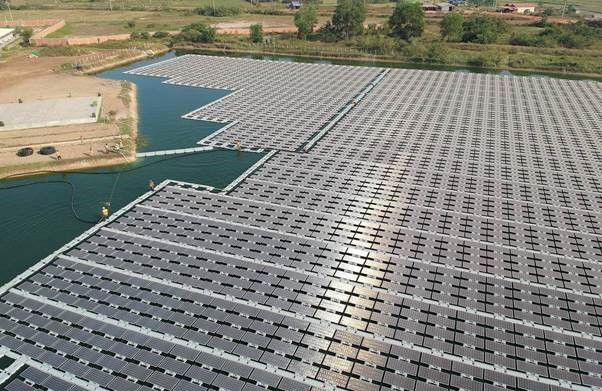 Cleantech Solar is building, financing and running a dual PV installation – 2.8MW in panels floating over a reservoir plus a further 7MW across rooftops – to power a production plant owned by the Chip Mong Insee Cement Corporation (CMIC) in the Kampot province.

PV Tech understands the floating element is now fully built while the rooftop portion is nearing completion, with plans for the PV plant to become fully operational by late March 2019.

Cleantech Solar, the builder of 200MW-plus of solar capacity in Southeast Asia and India, expects its rooftop-plus-floating scheme to generate 297GWh in power. The project should slash CMIC’s CO2 emissions by 197,000 tonnes throughout its lifespan, said the Singaporean developer, partially owned by Shell since last December.

Once it is up and running, the project is set to bolster Cambodia’s still modest PV ecosystem. Capacity has steadily risen since the early 2010s but barely surpassed the 27MW mark in 2017, according to IRENA.

With the help of the Asian Development Bank (ADB), the country is working to build large-scale solar into an energy mix still heavily reliant on coal, hydro and imports from Vietnam and Thailand.

The development financier supported in 2017 the country’s first large-scale PV solar scheme. Slated for construction by Sunseap Group, the 10MW Bavet farm is set to supply power to Cambodia’s electricity regulator EDC under a 20-year PPA.

Even more significant is the ADB-backed 100MW National Solar Park project, which will kick off with the setup of a 60MW plant in the Kampong Chhnang province. Under tender documents published by EDC in mid-February, aspiring developers can table bids until 17 May 2019.

An unclear legislative framework – PV was unregulated in Cambodia until last year – and grid connection bans for low-voltage facilities have impacted C&I solar in particular. As advised by lawyers approached by PV Tech, rooftop developers must ensure they have the necessary building permits and rights to use the site throughout the PPA duration.