Arizona’s state utility to tender 400MW of wind and solar 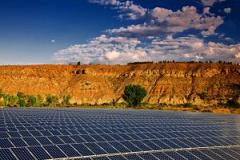 Arizona’s largest electric utility is gearing up to tender 400MW of renewables before the summer is up.

Arizona Public Service Company (APS) announced Monday that it will tender 150MW of solar and 250MW of wind resources to commercial partners by 15 September.

The planned solar generation will be owned by APS and designed with the potential for future energy storage. It will be switched on by 2021, according to a company release.

This added capacity will support the regional utility's target of expanding its renewable energy portfolio to around 2,500MW by 2021 – or enough to power half a million homes.

Solar accounts for 6.42% of Arizona's electricity and employs more than 7,500 people in the state, according to the Solar Energies Industries Association.

An independent, third-party monitor will review the competitive procurement process. More specific information about the tender will be released in the coming weeks.

6 October 2021
The future is bright for a new era of US solar and storage, and the 8th annual Solar & Storage Finance Summit will provide opportunities to discuss solutions to the industry’s challenges and provide a networking platform designed to bring together the top minds in the industry to do business. With a mix of high-level, informative presentations and panels, a stellar cast of speakers and audience members with deal-making capacity, the 2021 edition of the event will be a sell-out success.
american solar, arizona public service, energy storage usa, pv tender, renewable tender, rfp, ssfusa, us, usa