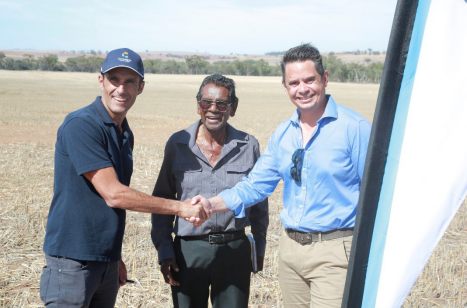 Carnegie Clean Energy has started construction of its 10MW Northam Solar Farm, which it claims to be the first utility-scale PV project to be developed on a merchant basis in Western Australia.

Carnegie’s largest solar plant to date, located 90 kilometres east of Perth, is also the first renewable investment by Indigenous Business Australia (IBA) and Bookitja, with Carnegie retaining a 50% stake in the farm and acting as asset manager.

Energy Made Clean (EMC), a subsidiary of Carnegie, has formed a joint venture with Lendlease Services to provide EPC services and the JV will complete the installation in the second half of 2018. The project will then sell power into the Western Australian grid. It will consist of approximately 34,000 solar panels across 25 hectares of land.

Carnegie’s managing director, Dr Michael Ottaviano, said: “We are delighted to have Western Australian Treasurer and Minister for Energy Ben Wyatt officially break ground on the Northam Solar Farm today, and celebrate the renewable investment partnership we have with Indigenous Business Australia.

“The Northam Solar Farm has been developed as a template for future projects where Carnegie receives value from multiple revenue streams including electricity sales and project construction, operating and maintenance.”

Eddie Fry, chair of IBA said: “IBA is very excited to be getting behind this project and helping to bring it to life as it is one of the first large scale solar projects in the country with Indigenous ownership.”

Karen Jacobs, director of Bookitja said: “The Bookitja Pty Ltd is excited to be an active party to the Northam Solar Farm. As an Aboriginal entity our invested interest in this ground breaking project will continue our focus on building economic growth for our community.”

Carnegie recently bagged funding to add solar to an offshore gas facility in the Timor Sea.