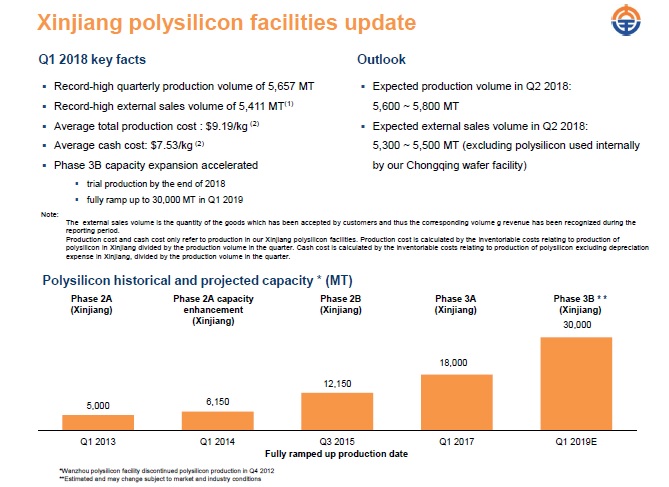 China-based polysilicon producer Daqo New Energy is accelerating the pace of its Phase 3B capacity expansion project as well as starting Phase 4A that will increase annual polysilicon capacity by 35,000MT.

PV Tech had previously highlighted in February, 2018 that Daqo planned expanding polysilicon production by at least 12,000MT in less than 18-months, which would be dedicated to supplying high-efficiency monocrystalline wafers producers, due to continued strong demand.

Daqo had then said that its Phase 3B expansion at its Xinjiang, China facility had completed ground foundation and initial ground preparation work in the fourth quarter of 2017 and was expected to start pilot production in the first half of 2019.

The expansion would lead to a total annual nameplate capacity of over 30,000 MT by the end of the second quarter of 2019.

The company has quickly revised those plans by accelerating the pace of expansion to include the complete construction and installation of equipment, as well as pilot production starting by the end of 2018. The ramp to full production capacity of 30,000MT is therefore expected to occur during the first quarter of 2019, according to the company.

Daqo also said that it was kick-starting its Phase 4A polysilicon expansion, which was intended to increase annual polysilicon capacity by 35,000MT.

Daqo noted that the design and construction of the new production facility would begin in May, 2018 with pilot production expected to begin during the fourth quarter of 2019.

Therefore, total annual capacity of 65,000MT was expected to be achieved by the first quarter of 2020.

The new facility is to feature state-of-the-art equipment and technology and produce ultra-high purity mono-crystalline-grade polysilicon. The additional capacity is expected to further improve manufacturing efficiency and is expected to further reduce production costs by approximately US$1.70/kg from current levels of US$9.19/kg in Q1 2018.

Capital expenditures for this facility were said to be around US$14.0-15.0 per kilogram, or approximately RMB 3.2 billion (US$502 million).

Longgen Zhang, Chief Executive Officer of Daqo New Energy, commented, “The entirety of our Phase 4 expansion plan will expand its manufacturing capacity by a total of 70,000 MT over two phases, Phase 4A and 4B, which will each consist of 35,000 MT of expanded manufacturing capacity. Phase 4A is an important milestone in our long-term expansion plan to meet customer's surging demand and urgent needs for ultra-high purity polysilicon. We will continue to focus on serving our customers with high quality products, improving polysilicon purity and further reduce costs to strengthen our manufacturing leadership in the industry.” 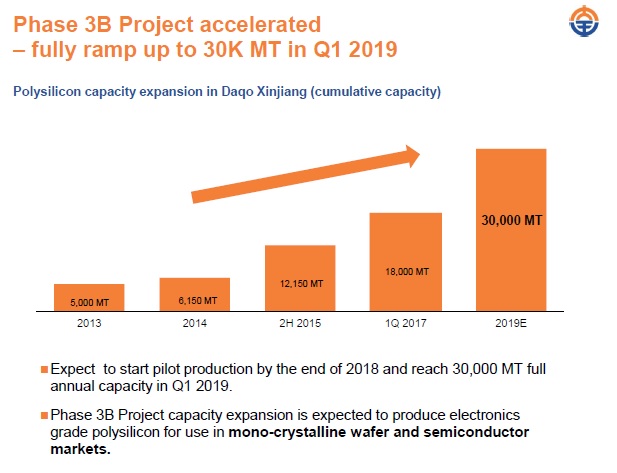