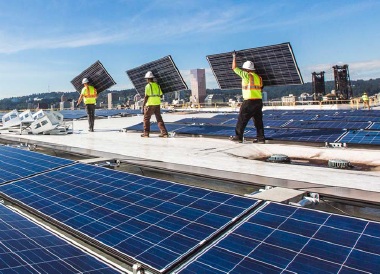 SPONSORED: The inverter market for commercial PV systems continues to rapidly evolve. This is due in part to the significant role that inverters play in PV systems. While they may only account for ~10% of the system cost, they actually influence ~30% of system cost (inverter, Electrical Balance of Systems, labour), manage 100% of system production, and control operations and maintenance (O&M) expenses by enabling PV asset management. Currently, only two main types of commercial inverters are available – central inverters and string inverters. While both offer different benefits, they also have drawbacks. Through technological innovation, solutions can be developed that combine the benefits of both, while also overcoming these standard drawbacks.

During the past decade, central inverters served as the standard for commercial PV systems. The fundamental reason for this trend was due to their economy of scale which allows lower cost per watt for large inverters, thereby decreasing the upfront cost of a commercial PV system. As the industry has matured, there has been a move away from central inverters. A main reason for this divergence is due to the costs that are incurred from the sheer heaviness and bulk of central inverters. While their hefty size requires a large footprint of land or roof space.

Just as new innovations, like module-level power electronics, helped the solar industry overcome traditional drawbacks in PV systems, such as energy limitations, lack of design flexibility, opaque monitoring, and safety concerns, new inverter solutions can help move the commercial PV sector forward. In the coming years, these types of innovations will be crucial in making commercial PV more accessible around the world.

Lior Handelsman, VP of Marketing and Product Strategy, founded SolarEdge in 2006 and currently serves as our Vice President, Marketing and Product Strategy where he is responsible for SolarEdge’s marketing activities, product management and business development. Prior to founding SolarEdge, Handelsman spent 11 years at the Electronics Research Department (‘‘ERD’’), one of Israel’s national labs, which is tasked with developing innovative and complex systems. At the ERD he held several positions including research and development power electronics engineer, head of the ERD’s power electronics group and manager of several large-scale development projects and he was a branch head in his last position at the ERD. He holds a B.S. in Electrical Engineering (cum laude) and an MBA from the Technion, Israel’s Institute of Technology in Haifa.

27 June 2023
Join us in London for 2 days as we look at the UK’s new landscape for utility & rooftop solar. Understand the new opportunities within this GW-plus annual market!
commercial and industrial, commercial rooftop, commercial scale, innovation, inverter, solaredge, string inverters