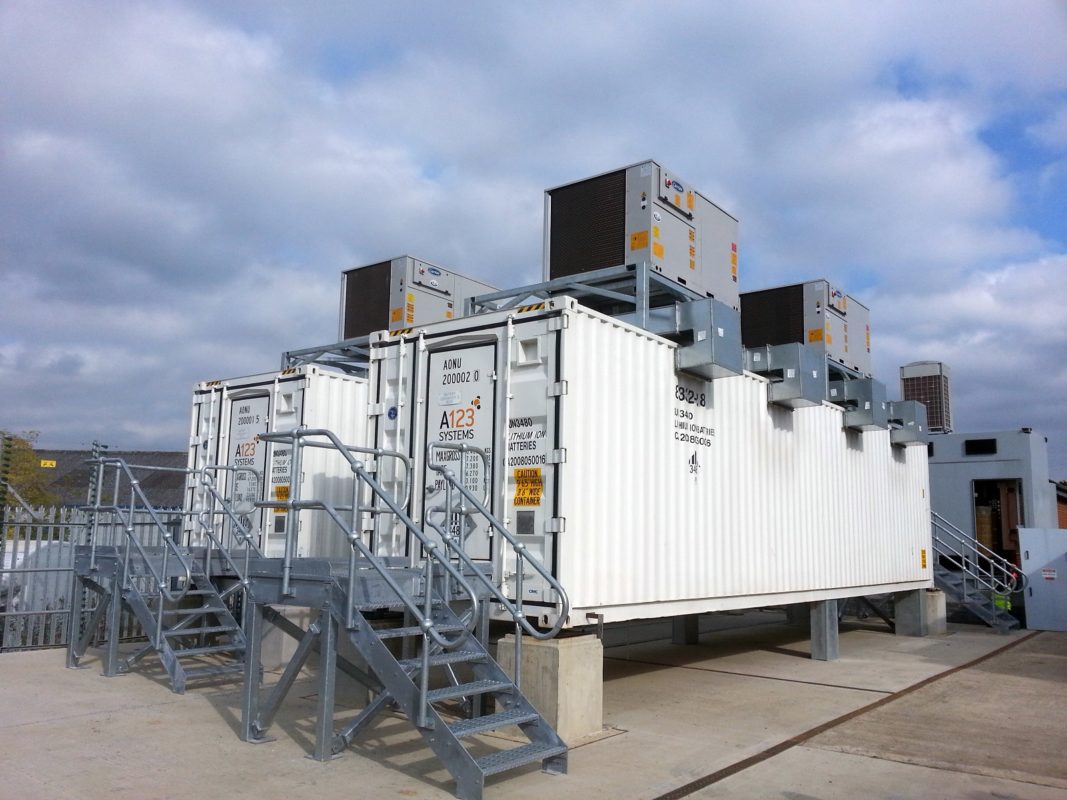 The European energy storage industry has witnessed remarkable growth over the last decade, going from 9MW of project announcements in 2010 up to a total of 5,700MW in 2020 (year to date). Out of these projects, around 1.7GW are operational while the remaining 4GW are either announced or under construction (Figure 1). 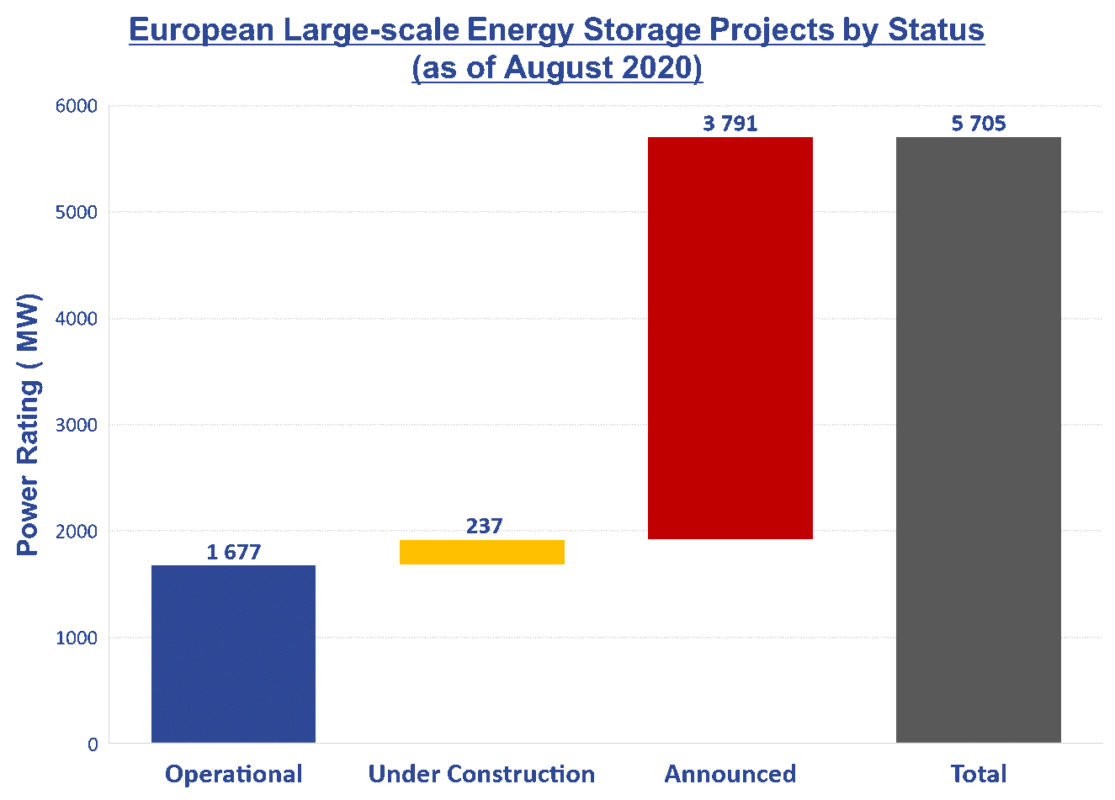 Such uptake has been predominantly led by frequency control applications. However, things are changing as new revenue streams emerge and market prices tend to decrease.

The rise and fall of the frequency control bonanza

European frequency control markets played a major role in energy storage uptake thanks to lucrative revenues and accessibility to new technologies such as batteries. In fact, batteries are well suited for primary reserve provisioning thanks to their fast response and the assets get remunerated by the grid operator for each MW available (payments in €/MW/h) to ensure system resiliency. 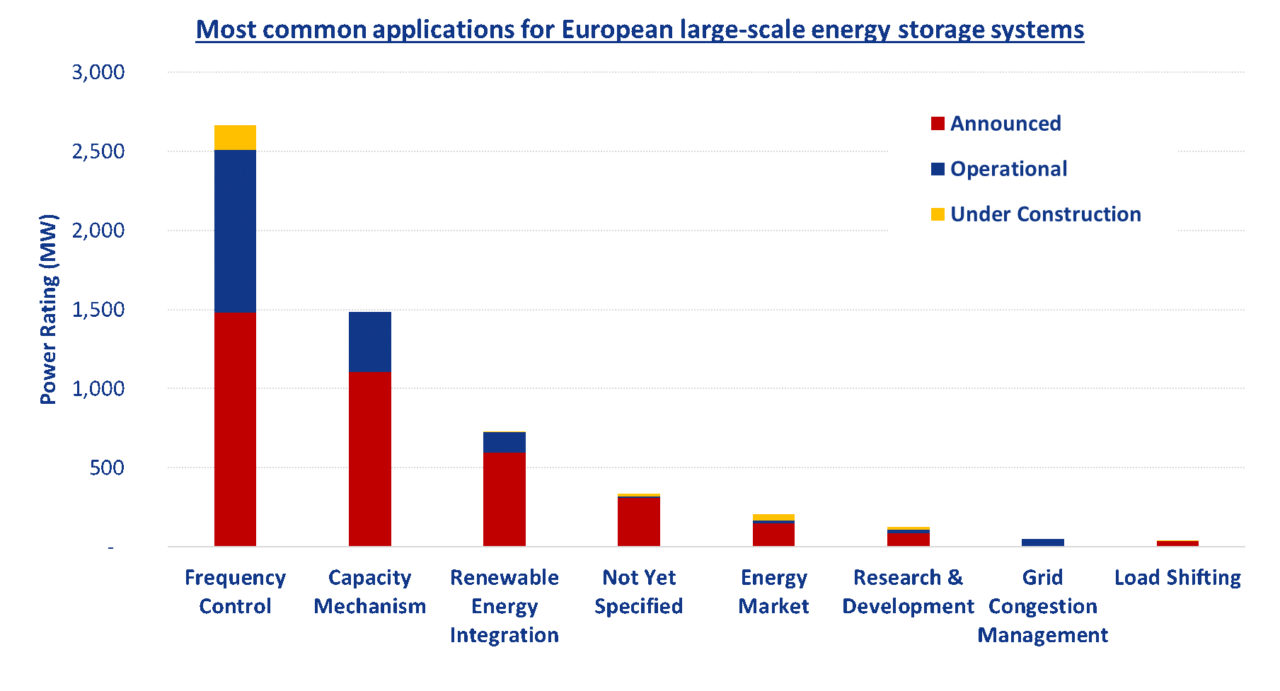 In Western Europe, 3GW of frequency control reserves (denominated Frequency Containment Reserves, or FCR) are jointly procured by six countries on a common platform. The current FCR auction takes place daily and involves Germany (603MW), France (561MW), the Netherlands (74MW), Switzerland (68MW), Austria (62MW) and Belgium (47MW) with Denmark (DK1, 30MW) expected to join soon, as well as Spain (275MW) and Poland (168MW) in the years to come. Currently, 477MW of battery storage systems are already delivering this service (out of which 87% are located in Germany) with an additional 209MW on the way.

For each country, the frequency containment reserve requirement is based on the ratio of the yearly national production (in MWh) to the yearly total production over the synchronous European area. Procurement targets slightly vary every week based on TSO (Transmission System Operator) requirements and past years’ production. In fact, 30% of each country’s reserve must be nationally sourced and the exports to other FCR Cooperation members are limited to the maximum between 100MW and 30% of each capacity block.

However, this market’s revenues fell from an average of €26/MW/h in 2015 and €18/MW/h in 2017 to as low as €5/MW/h in early 2020. Henceforth, this market could no longer justify project viability by itself, requiring new and additional revenue streams.

Frequency Containment Reserve auctions take place over the Regelleistung platform. Until July 2019, these auctions used to occur on a weekly basis before shifting to a daily one as products were procured on a day-ahead term. The older auction model incentivised bidders to “guess” bidding prices, rendering them unrepresentative of the actual merit order of FCR resources.

Another change took place on 1 July 2020 as the FCR auction timeline was once again changed: instead of bidding for 24-hour products, market participants are now able to bid daily for six four-hour delivery periods. This evolution offers more flexibility to market participants, allowing them to participate in other markets and diversify revenue streams within the same day. Thus, a better market transparency is expected since FCR prices will probably reflect market conditions (higher prices in the day, lower in the night). 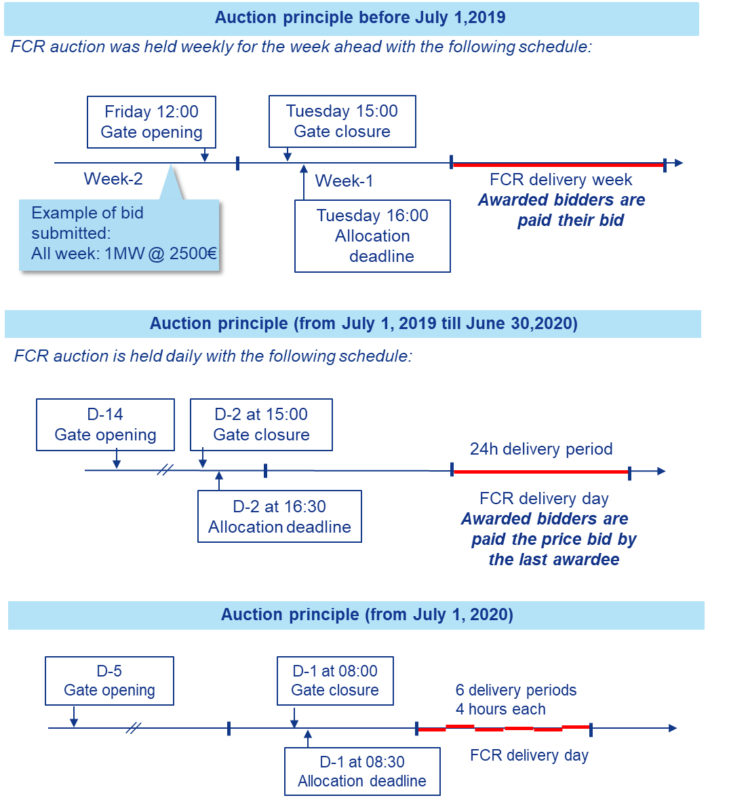 This evolution can be seen in Figure 4 that represents marginal FCR prices over the last three years. The most significant event is the sharp decrease of market revenues as prices fell from an average of €18/MW/h in 2017 to as low as €5/MW/h in early 2020. Such price fall renders the new market evolution even more crucial to ensure project viability through multiple revenue streams that will be discussed in the next part of this article.

29 November 2022
PV ModuleTech EMEA in Madrid on 29-30 November 2022 will address the factors underpinning the changing PV module landscape, gathering together all the key stakeholders across the value-chain from module production to field testing. Join us for presentations from the leading players in the sector, clearly identifying the opportunities and challenges set to impact module supply to Europe and the Middle-East over the next few years.
energy storage, europe, european energy storage, fcr, frequency response, revenue stacking