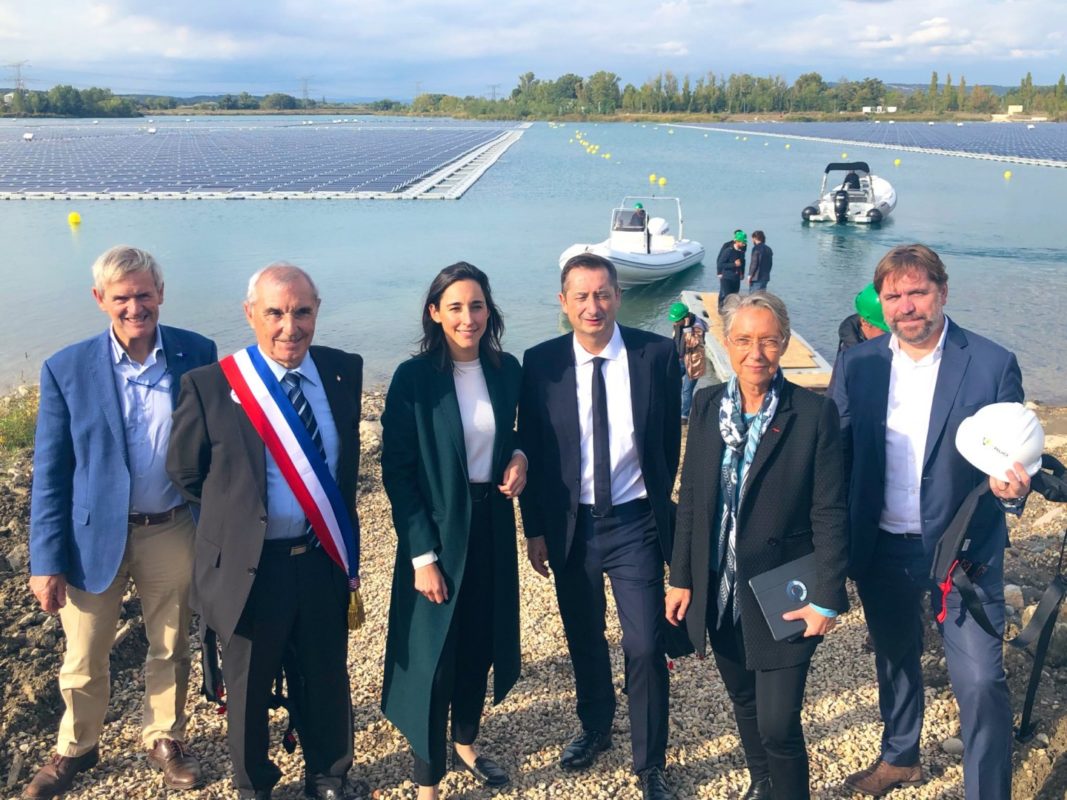 Top French state officials have helped cut the red ribbon of a floating solar plant that is being touted as Europe’s largest, a project delivered by Paris headquartered Akuo Energy.

Documented by social media posts, Borne and Poirson's visit saw them tour the 17MWp plant built since last September over a lake by an old quarry in Piolenc, north of Marseille.

The plant boasts 47,000 panels installed atop the so-called Hydrelio platforms, made of high-density polyethylene (HDPE) and designed by floating PV specialist Ciel & Terre.

The Hydrelio units, exclusively distributed by Akuo in France, are supposedly built to withstand 210 km/h wind speeds. They cater to systems on irrigation basins and drinking water basins.

Approached by PV Tech in the weeks preceding O’MEGA 1’s powering up, Akuo explained project construction at the 17-hectare site was taken care of by EPC specialist Bouygues Energies.

The plant, Akuo told this publication, was backed with €12.8 million (US$14.28 million) in debt and €4.2 million (US$4.68 million) in equity. Part of the latter was sourced via crowdfunding.

As Akuo explained earlier this month, the plant will sell its power directly to Swiss energy aggregator E6, with additional revenues set to come via France’s premium tariff scheme.

The floating breakthrough finds the French government ramping up support to all forms of solar energy, with targets set for installed capacity to grow from 9.1GW to 35.6-44.5GW by 2028.

Paris will next follow with further tendering for 2GW of ground-mounted PV, side by side with rooftop-specific exercises and PV auctions to repower a site holding its oldest nuclear plant.

The powering-up of O’MEGA 1 sees Europe press on in the global race of floating solar, a segment on the rise after reaching the 1.1GW installed capacity threshold last September.

One of the latest additions is Vietnam’s reportedly first floating project, a 47.5MW scheme a subsidiary of national utility EVN will develop with support from development financiers.

29 November 2022
PV ModuleTech EMEA in Madrid on 29-30 November 2022 will address the factors underpinning the changing PV module landscape, gathering together all the key stakeholders across the value-chain from module production to field testing. Join us for presentations from the leading players in the sector, clearly identifying the opportunities and challenges set to impact module supply to Europe and the Middle-East over the next few years.
akuo, akuo energy, ciel & terre, ciel et terre, europe, floating pv, floating solar, government policy, largescale2020, policy and regulation, sfi2020, southern europe