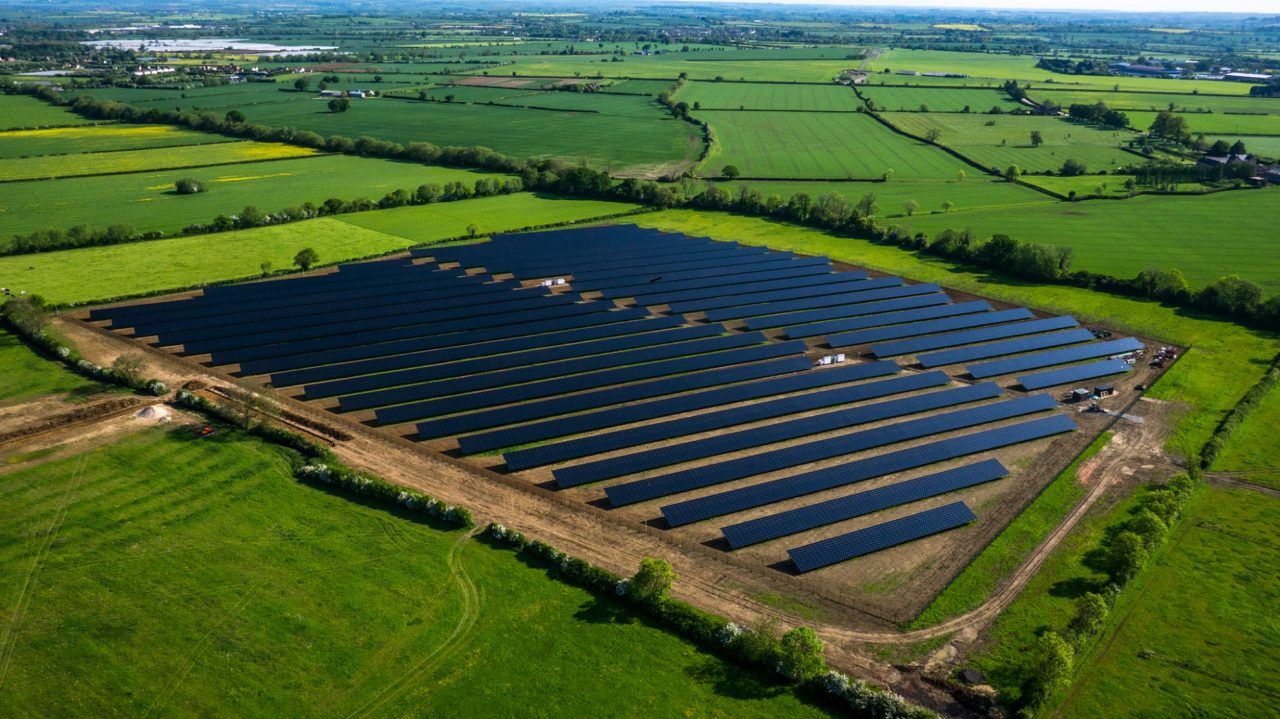 The UK solar industry is set to emerge as one of Europe’s leading post-subsidy large-scale solar markets from 2018 onwards, with plans being scoped, submitted and approved in the past 12 months alone that comfortably exceed the gigawatt-level of new site deployment.

Sites are typically being planned now in the 20-50MW range, with the largest site going through full planning submission today with a potential capacity, when built, above 100MW in size.

This article reviews some of the factors at play, discusses the drivers, and explains the business strategies being employed by the developers now set to reshape the next strong uptick in UK ground-mount solar farm builds.

More information and discussion will be provided in the forthcoming webinar, UK Multi-GW Solar Pipeline Revealed, on Wednesday 9 August. Details on how to register for the webinar can be found here. Other sources of market intelligence are outlined at the end of this blog.

Much of the global solar industry remains fixated on legacy solar markets that existed in a time when subsidies were widely available. Not without good cause, as this has shaped global PV deployment until now and will have a massive bearing on annual deployment levels over the next few years.

But long-term, solar has economic and environmental drivers that work in the absence of local subsidies, and the case for this will become more widespread and prevalent during the decade from 2020 onwards.

In looking at the 13GW of solar in the UK, clearly this only existed because incentives were in place and eager participants (developers, EPCs, component suppliers, planners and investors) drove the markets to levels that could only be obtained in a supply-driven climate.

That knowledge learned is essentially what puts the UK in a prime position to make the move from incentives to post-subsidy a relatively painless exercise.

Other mainland European countries that went through similar supply-driven PV deployment phases did so effectively too early in the day, with reference markers (components, capex, financing, energy market dynamics) simply not conducive to restarting in the absence of continued risk-free returns from respective governments or utilities. Spain for example had to endure almost a decade in the PV wilderness between its brief flirtations as global driver in 2008, to the recent gigawatt-levels of solar allocated by auction in 2017.

So, being late in the game for solar uptick in Europe has its benefits, and if in any way intended by policy makers, then immediate cabinet promotions should be duly rewarded!

Of course, with the solar industry hard enough to predict three months out, far less three or five years, it is just pure luck that the UK boom took place when incentives were a must, and finished when solar was on the brink of being viable without subsidies.

One after another, government ministers in the UK trumpeted verbiage along the lines of ‘solar has to stand on its own two feet’, and ‘subsidies are being cut back to help the industry become self-reliant’. No-one ever believed that the motives for reducing or removing subsidies were to help the industry, but to slow down uncontrollable deployment rates and the financial implications of these.

Putting all that aside, as few would have acted differently if placed in government offices again, we are now potentially in a place where government support for solar can be rationally considered, without the fear of having to subsidise and lose control, and this is a game-changer as momentum continues to build that future CfD rounds could be highly favourable to solar PV as a prioritised technology of choice. What a difference a few years can make.

Over the past few years, there have been many claims from developers as starting large-scale solar farms, post-subsidy. However, as long as these plans remain absent from any planning process through LPAs, they are just plans and no more. Every solar farm needs full planning application approval as a bare minimum, as the planning portal remains the leading marker for any future deployment prospects.

In this respect, we can also see clearly the sites that are a spill-over from development that had been done for Contracts for Difference submission in the past, or sites that were either partially done under ROCs or simply never got to shovel-ready stage to generate financing under 1.3 or 1.2 ROCs.

Removing these, we have the ‘real’ pipeline sites that were put into planning during 2016 and 2017; well after planning deadlines for ROCs and with no visibility of any CfD rounds for solar. As such, it has to be inferred that subsidy-free operation of these is envisaged, or at a minimum using shifting to a different business model and revenue streams and carrying a different risk profile for investors.

Understanding the 3GW+ of pipeline sites

Currently, the post-subsidy pipeline of large-scale solar farms in the UK exceeds 3GW, across more than 300 sites. Applying the timeline-based filter (as discussed in the section above), we can segment the pipeline now to see how much of the 3GW is arising from specific post-subsidy activity. 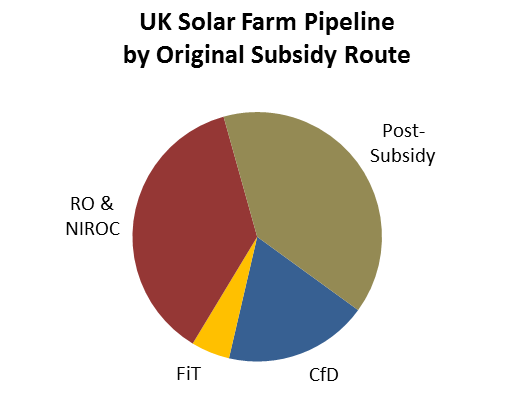 The ROC portion of the pie-chart above is based on sites where planning approval was obtained, but the developers failed to move sites forward before the 1.2 ROC deadline on 31 March 2017, and a bunch where part of the sites were completed (typically 4.99MW under 1.2 ROCs) but where material amendments were approved by LPAs that ring-fenced potential expansion phases to access existing red-line planning approval.

A number of the sites falling under the RO/CfD list have also been acquired as primary SPV acquisitions and reworked through planning to allow the addition of energy storage systems, either intended for storage auction mechanisms or as site-specific subsidy free solar/storage construction during 2017/2018.

The most interesting segment of the pie-chart above however relates to the post-subsidy part. These are new sites that have emerged in 2016 and so far in 2017. Approximately 95 sites fall into this category, adding up to more than 1.3GW. Incredibly, more than 25% of these (on 560MW worth of new solar farms) are being planned to include energy storage units.

In terms of the size of projects within the full 3GW-plus of projects, most of the capacity falls into the 20-50MW site level – again confirmation of the intent to move these forward post-subsidy and applying economy-of-scale economics as a key driver for return-on-investment metrics.

Indeed, in the past few days, full planning documentation has been tracked by our in-house research team at Solar Media for the UK’s first 100MW solar farm. This potentially hints at just the type of planning activity that is necessary to fully support the transition to solar farms moving to subsidy-free and at very large scale. Given the developer in question and the site location, we expect this site to be approved in the next few months, raising the prospects of a 100MW solar farm being constructed in 2018. What a start to subsidy-free deployment this would represent for the UK solar industry. 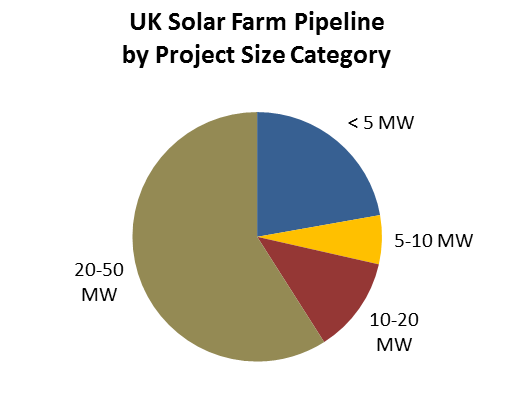 Forecasting build-out probability in the analysis

As with every pipeline of planning or scoping, it is essential to apply cautious forecasting, in terms of the probability of completion. Clearly, if a site is simply at screening and waiting to see if an environmental impact assessment is needed, the chances of final build-out are at the 10-20% level, depending on the developer in question and whether the company is using as a tentative placeholder or as a serious attempt to submit a full application.

The history of the site also needs to be factored in; for example, was the site intended purely for ROCs and is too small to attract any real attention in the absence of subsidies? Is there activity at the SPV level that would suggest intent on new site owners to rework an existing approved application?

But probably the most useful reference point in the history of the site applications comes down to the current developer/owner, and the track-record in UK solar farms and seeing through shovel-ready sites either through in-house EPC work or packaged into shovel-ready site bundles and sold to global developers that have the financial backing to take on large solar farm developments and see them through to completion and ultimate third-party institutional ownership.

The figure below shows a capacity-based segmentation based on adding up site-specific build-out probability factors. The key part to view is in the >50% segments that capture the most viable sites for the 2017-2018 time period. Many of the other sites will end up terminated or not seen through for a host of reasons, as is normal with any pipeline of applications. But a bunch of sites here will move to the >50% bands in the next 12 months, in addition to new applications yet to be lodged. This is expected to keep the hot prospect listing an ongoing research exercise and tracking these for prospective component suppliers (modules, inverters, mounting) and EPCs will be essential reading over the next 12-18 months. This is particularly true for the main suppliers and EPCs that benefited from the 2013-2017 UK ground-mount market in the UK, and retain European operations ahead of the regional subsidy-free or auction-driven uptick from 2018 onwards. 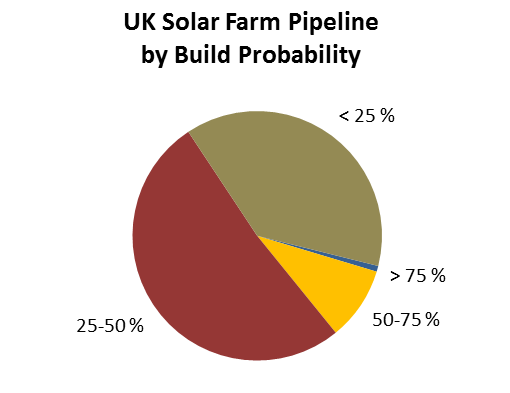 Interestingly, more than 10% of the 3GW pipeline is coming from the public sector. Here we are lumping for convenience local and borough councils and utilities (and in particular water utilities) as a grouping. Some of the plans at the council level are highly ambitious in seeking strong solar farm contributions to meet long-term sustainability and renewables aspirations, and some even include co-located solar and storage sites. This grouping has historically offered good business to local UK-owned EPCs and sub-contractors, and this trend appears to continue in the post-subsidy climate also.

Visibility today is critical for module/inverter/mounting suppliers, potential EPCs, and indeed asset owners hoping to have first refusal on shovel-ready status. When the market has moved forward in the next 12-24 months, those companies looking for the opportunities then may simply be arriving on the scene too late.

Solar Media is undertaking several fact-finding activities in the next few months to help in this respect.

The Solar & Storage Live event at the NEC in Birmingham, UK on 3-5 October will showcase subsidy-free UK solar at the Solar Business Conference on 4 October 2017. More information on registering to attend for the talks can be found here.

Finally, our in-house Market Research team is set to launch a new monthly report this month, listing all the projects that make up the 3GW of new post-deadline UK solar farms. To register to get email alerts on the release date and full content of the report, please note your interest through this link.