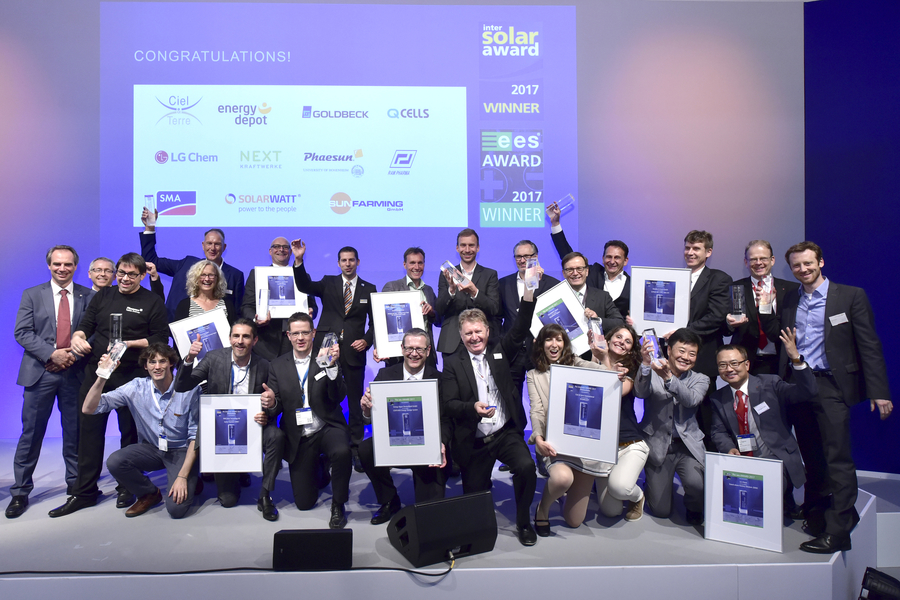 In its tenth year of organisation, the Intersolar AWARD proceedings reflected a niche but high-profile sector of the downstream PV industry, floating solar. The coveted prize in the ‘Photovoltaics’ category went to project developer Ciel & Terre International, regarded as a pioneer of floating solar with around 43 projects completed.

Floating solar systems are gaining rapid interest across the globe and recent projects that have been in the 20MW and 40MW range are moving to the 150MW size in China, according to major PV inverter manufacturer, Sungrow.

The French company Ciel & Terre International were noted for its modular and scalable ‘Hydrelio’ technology, which has developed a solution for mounting solar modules onto floating platforms. The water automatically cools the solar modules, which increases the energy yield. The floating installation does not have an adverse effect on water quality as it shields the water from too much solar radiation, thereby reducing the formation of algae. The main components of Hydrelio are fully recyclable. The panel of judges noted: “This technology makes an important contribution to the global energy transition for this niche market.”

Floating solar has a significant opportunity globally and when coupled to bifacial modules in the not too distant future will be able to generate higher yields, making a significant reduction to the LCOE of these types of installations. 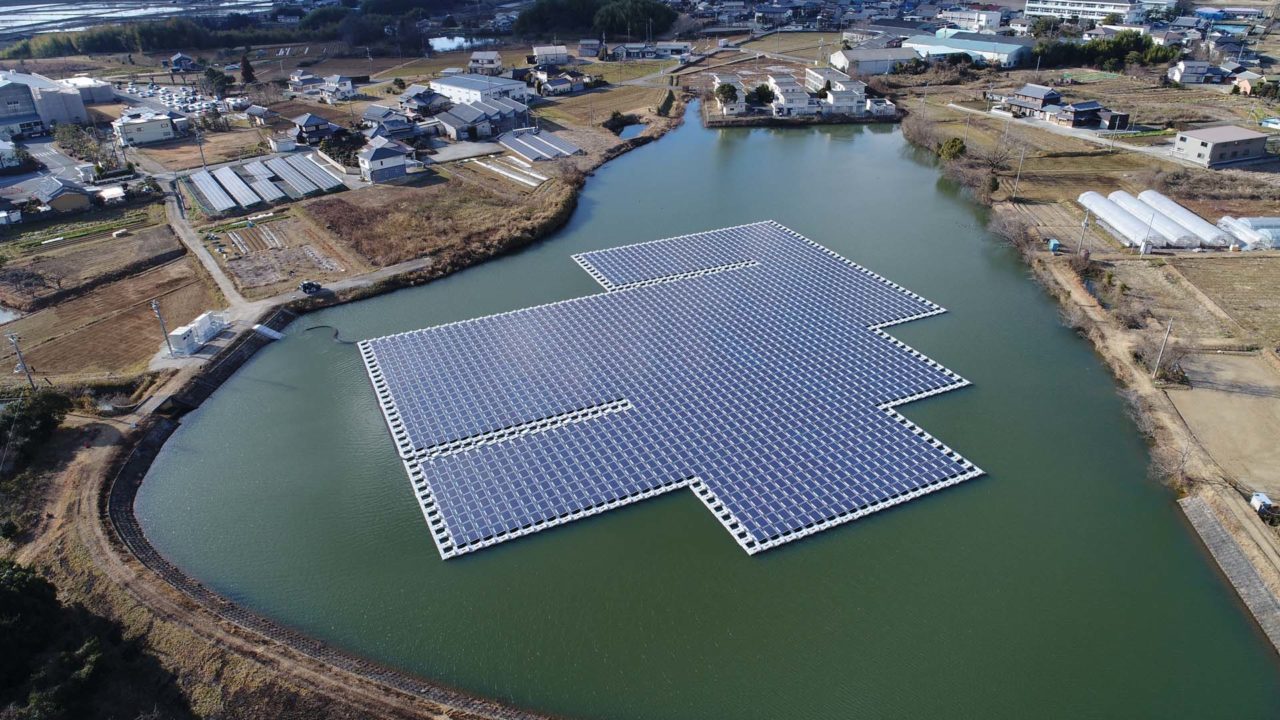 Hanwha Q CELLS also won an award in the ‘Photovoltaics’ category with its  Q.PEAK RSF L-G4.2 360-375 PV module. Notably the module frame is constructed folded mild steel, rather than the standard use of extruded aluminium. To protect the mild steel it is coated with a zinc-aluminium-magnesium alloy, which is claimed to provide 10 times better corrosion resistance compared to galvanised steel. The Time to fix modules on a standing mounting structure can be reduced by over 60% compared to standard systems with clamp mounting as only a small mounting key and self-tapping screws are needed.

The module’s CO2 footprint is also claimed to be reduced by around 15%, due to not using aluminium and also saves up to 80% in material costs. The panel praised the combination of innovative design and product sustainability.

Receiving the award on behalf of Hanwha Q CELLS, the company´s Global CTO, Ph.D. Daniel JW Jeong, said: “We are very pleased about the decision of the Intersolar Award Jury. Our new steel frame module combines a number of innovations on different levels with our high performance cell technology Q.ANTUM. The improvements in terms of performance, installation cost and LCOE are such that we believe this technology is likely to be setting the next industry standard regarding solar modules for utility scale applications.”

A past regular winner, major PV inverter manufacturer SMA Solar Technology also received an award in the ‘Photovotaics’ category with the SMA Sunny Tripower CORE1. The free-standing string inverter adapted for use on commercial rooftops and on the ground provides the ability to have an optimized installation and easy configuration that allows this inverter to be quickly connected to the grid.

Its new, active cooling system is the basis for a unique design with easy access to all components and connections for direct and alternating current. Integration into the power system was noted, due to effective control functions. The certified SMA Sunny Tripower CORE1 can help save 20% of costs compared to other SMA products in the market. The panel was impressed with the efficiency of the technical design and the product’s improved handling.

“By presenting this award for the Sunny Tripower CORE1, this year’s jury has singled out a product that will make a major contribution to the success of commercial PV systems worldwide,” said Nick Morbach, Executive Vice President of SMA’s Residential and Commercial business unit. “The string inverter is the perfect basis for new SMA solutions aimed at optimizing commercial self-consumption in all markets worldwide. SMA is once again making a valuable contribution to a future-proof, renewable energy supply.” 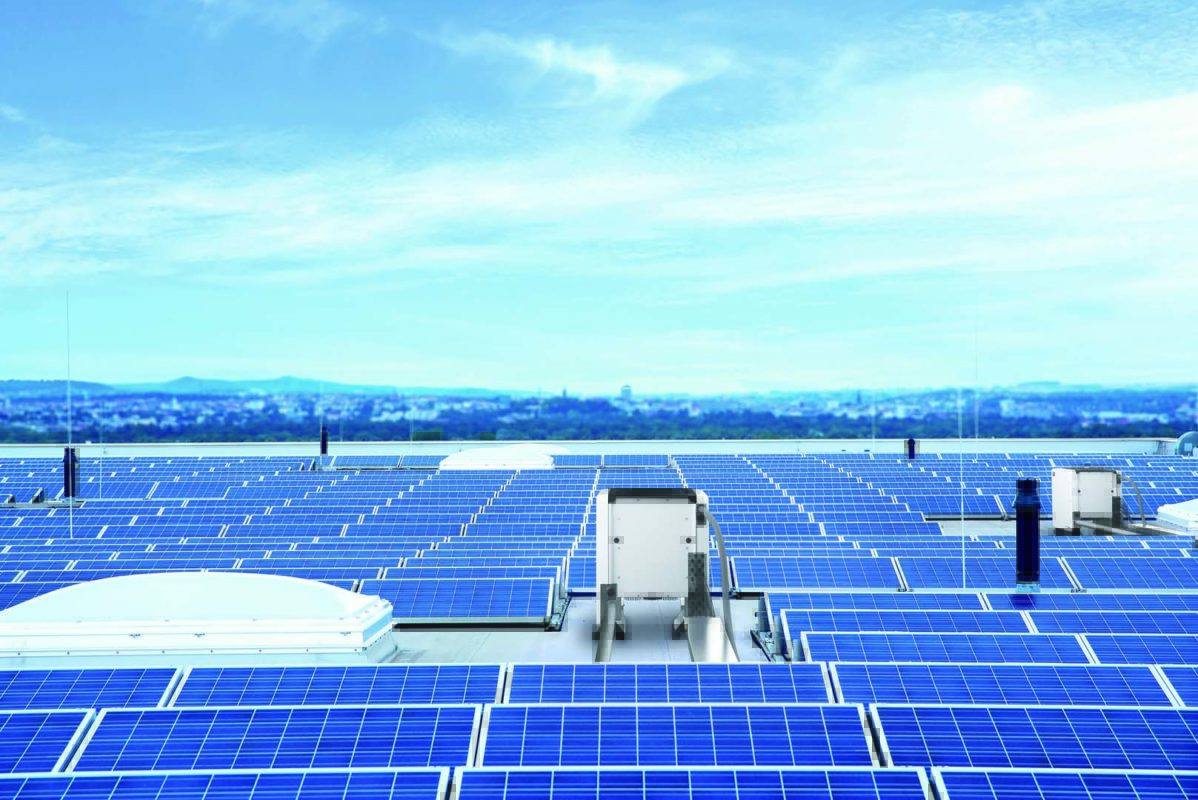 A PV project developed between the University of Hohenheim and Phaesun as technology partner was initiated by the Deutsche Gesellschaft für Internationale Zusammenarbeit (German Society for International Cooperation (GIZ)) that uses PV for cooling milk in Kenya and Tunisia was highly cited.

The concept maintains the cold chain for storage and transport of milk, which is particularly critical in off-grid regions. The system is based on conventional direct current refrigerators equipped with a smart component: The cooling power demand is adapted to the solar energy generated each hour and batteries are replaced by thermal energy storage in the form of ice. The project’s potential positive effects on society and the economy, as well as the favourable business case was said to have won over the panel of judges.

RAM Pharma, a Jordanian pharmaceutical company, implemented its first project for direct solar process steam generation for industrial process heat in the Middle East and North Africa. The project combined 18 LF-11 Fresnel collector modules which generate steam at a temperature of 160 °C and are operated alongside a boiler.

Next Kraftwerke from Germany operates one of Europe’s largest virtual power plants, which encompasses 4,200 medium and small units. The total output of the Next Pool virtual power plant is almost 3,000 megawatts. Next Pool uses digital networking to close the gaps resulting from fluctuating infeed of energy. Real-time data show the output and status of each component at any given time. Even more detailed forecasts are possible thanks to real-time information and data provided via interfaces with over 15 inverter manufacturers. The panel felt that the business model is important for the development of regulatory framework conditions and was also praised for the contribution made to the future development of global power supply.

SUNFarming, a Germany company which acts as investment controller and project developer of the Food & Energy Training Project developed 15 agro-solar greenhouses on the campus of North West University in South Africa with the aim of producing food and energy in an efficient and resource-conserving manner in one place.

Students and citizens can use the project to acquire knowledge and skills. The project also demonstrated how a PV package can be integrated into the agro-solar substructures of large food and energy installations. The panel of judges was impressed with the global development potential and the great societal benefit, including job creation.

Goldbeck Solar which designs, builds and manages free-standing and rooftop PV installations across Europe installed a PV system to cover the Hellsiek landfill in Detmold in order to prevent clean rainwater from seeping into the landfill and being contaminated.

The dual-use concept for waste disposal and energy generation made this hybrid solution both resource-conserving and cheaper than conventional installations. The scalable system reduces the annual CO2 emissions by more than 7,000 metric tons. The panel of judges was impressed with the high level of innovation in combination with the use of low-cost standard PV components in an innovative and important area of application.