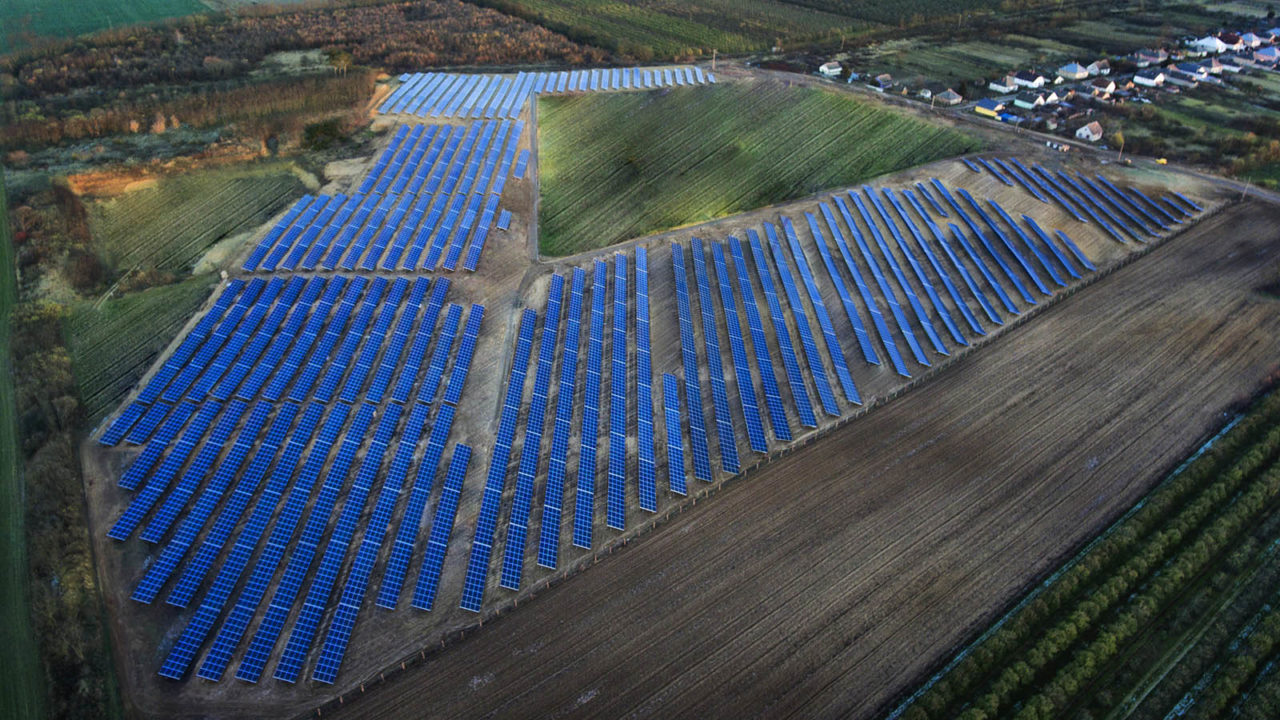 The PV industry continues to have frequent casualties in terms of PV module suppliers being able to carve out a long-term sustainable business model. This issue remains critical when suppliers are short-listed for large-scale solar sites, globally.

Working out how to benchmark module suppliers in terms of manufacturing and financial health is therefore key to investors, looking to maximize long-term returns.

During the first half of the year, we have been looking in more detail at the analysis contained within the PV ModuleTech Bankability Ratings, and what factors seem to enable some companies to stay profitable regardless of external factors.

PV-Tech’s PV ModuleTech Bankability Ratings analysis has continued to gain widespread acceptance as the go-to resource to understand the relative strengths and weaknesses of the 100-plus PV module suppliers serving the industry today.

The Q2’20 report release confirmed the breakaway status of the leading suppliers to large-scale utility-based ground-mount solar farms, with multi-GW production a prerequisite to being able to supply 50MW-plus sites, in addition to securing GW-level supply arrangements with developers/investors holding some of the largest shovel-ready portfolios today.

While the business models of leading PV module suppliers vary today, depending mainly on the dependence of module revenues towards overall group turnover and profitability, the ultimate goal for all module producers is to operate a stable and profitable stand-alone module segment.

Over the past twenty years, very few module suppliers have succeeded in doing this. Many companies have had short periods where everything seemed to be going smoothly, only to come unstuck when market conditions changed quickly.

Reasons for this are plentiful, but tend to arise when ASPs decline quicker than costs, trade-barriers get put in place for key end-market regions, or – in recent years – when mainstream technology changes quickly.

Since 2015 however, one company has enacted an almost flawless pure-play module business, and continues to set the gold-standard that all other module suppliers seek to emulate. This company is JinkoSolar.

This article looks at the analysis contained within the PV ModuleTech Bankability Ratings, as a means of quantifying the above narrative, and benchmarks JinkoSolar with the other 15-20 leading PV module suppliers that command A and B grades (AAA to B) in the bankability ratings.

Reviewing the applicability of the PV ModuleTech Bankability Ratings methodology

For almost ten years, the PV industry was devoid of any meaningful analysis to benchmark the bankability of the hundreds of module suppliers that pertained to be industry-leading and having superior quality product compared to every other competitor.

Who knows how many companies in the past ten years have claimed to be part of a club listed in a third-party provider’s so-called ‘Tier-1’ category? Many of these companies have come and gone; many have gone bankrupt; many were barely producing modules themselves in-house.

The need for a credible methodology to benchmark PV module suppliers has always existed in the PV industry, and this ultimately was the driving force in PV-Tech’s market research team establishing the ModuleTech Bankability Ratings in 2019.

Validation of the analysis, for any module supplier, at any time in the past ten years, had to make total sense. Rating trends, upwards and downwards, also had to reflect market reality and what was ultimately happening with purchasing decisions for large-scale solar farms and long-term supply contracts.

So, let’s have a look at putting data behind the text outlined at the start of this article; what differentiates Jinko from other module suppliers covering the period 2015-2020. The following section discusses this in detail.

Five years is a (very) long time in solar

Having a business plan in the PV industry that lasts more than a couple of years is rare. Many of the leading module suppliers guide for a few months, and then are forced by external factors to redo forward-looking aspirations.
For those teetering on the edge of operational solvency, having a force-majeure incident to pull out of the bag has become a regular occurrence.

One remembers, for example, the amendments to Germany’s EEG some ten years ago that resulted in total confusion in China-solar, as if some grave injustice had just been done to cut off the endless supply of crates from China arriving in Europe and putting European solar companies out of business. Other step-wise changes have also been seen through the US imposing AD/CVD duties, Europe enforcing MIP on China, and so on.

Along the way also, there have been periods of chronic over-investment to the sector, leaving upstream suppliers never far away from inevitable ASP erosion that never, ever, recovers.

And finally, of course, 2020 has COVID-19 impacts. Perhaps, in the history of the PV industry, this is the one time that a true force-majeure has happened. The fall-out, reshaping, shakeout, or whatever term you wish to use, will not be known until the end of the year. But make no mistake, COVID-19 issues will only affect PV module suppliers that were on that edge, needing just one unexpected factor to render a legacy business model as obsolete moving forward.

In short, five years in solar is a very long time; having one single workable business model for five years only succeeds if the model is watertight in many ways.

When we established the PV ModuleTech Bankability Ratings methodology last year, it was essential that the analysis made sense at any point in the past, was spot-on in real time, and – crucially – could be used to forecast accurately several quarters out.

To do this, we reviewed the methodology back to 2013 and each year, asked a simple question: did the hierarchy of the module suppliers reflect what was happening then in terms of module supply for large-scale utility projects and supply pipelines by company at that time.

To explain this in more detail, the graphic below looks at all the PV module suppliers currently rated in the top groupings (A and B) of the rankings system. Recall that there are nine ratings bands: from AAA as the top-rated, down to C as the least bankable (or highest risk). There is a clear differentiation in the companies rated in the A and B grades, and those in the C grades (CCC, CC, and C).

At any given time, the A and B graded companies can be regarded as the most bankable in supplying modules to large-scale ground-mount utility-based sites, in particular when institutional investors are involved in component supplier choice.

The graph shows the average annual bankability score for each of the current A/B graded module suppliers, over the 5-year period from 2015 to 2020. 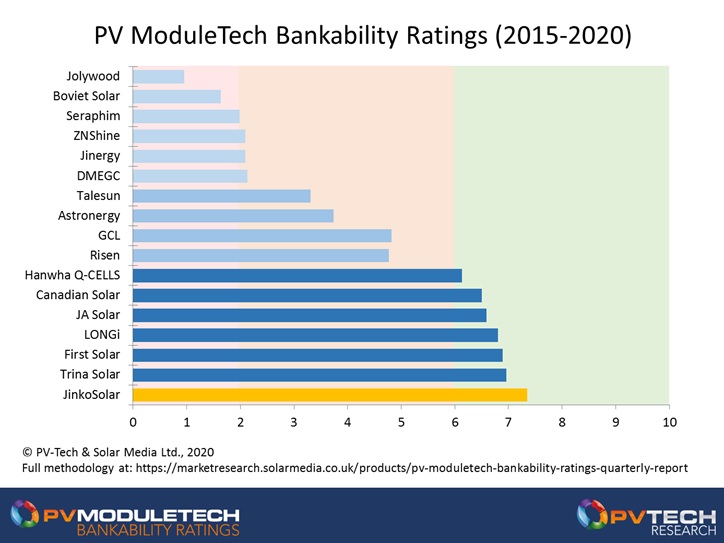 The above graphic can be seen to substantiate the introductory text, relating to JinkoSolar having been the clear leader over the past five years, in terms of bankability. One can also see a clear top-grouping (including Trina, First Solar, LONGi, JA Solar and Canadian Solar) that average out in the A grades (AA and A ratings). A second tier grouping then includes Risen, GCL-SI, Astronergy and Talesun.

It should be noted that Jolywood and Boviet Solar (companies now falling into the B rating) have a lower average score over the past few years, based mainly on their entry/growth phase of module shipments in the early years of the five year period.

Looking more closely at JinkoSolar, the company’s decision to decouple its downstream operations and become a pure-play module supplier is evident when considering that, during the past five years, revenues from module shipment have been >98% of the company’s turnover. Few, if any module suppliers globally, are anywhere close to this level or can sustain this for any length of time.

If we then consider that JinkoSolar has grown module shipments during the past five years by a factor of four, and is still by far the leading supplier by volume to the industry today, it becomes clear why the company has laid out the blueprint on how to survive and prosper in the PV industry selling modules.

The modus operandi is relatively simple actually. Run factories as close to full utilization as possible, add capacity where and when needed, utilize third-party wafer, cell and module supply as necessary, have strong sales teams globally in the end-market regions that matter (which also translates to ‘stay away from over-dependence on China and India’), establish a brand, and – most importantly – keep blended costs 15-20% lower than average module ASPs at all times.

Get that formula right and selling modules in volume is a sustainable operations. But as I indicated above, some companies achieve this for short periods: very few can keep this going for longer than a couple of years.
The second graphic (below) shows JinkoSolar’s bankability scores by year back to 2015, compared to the average by year of the A/B grade suppliers shown in the graphic above. This graph shows that Jinko has been rated AA consistently over this time period, a feat only matched by one other company (First Solar). 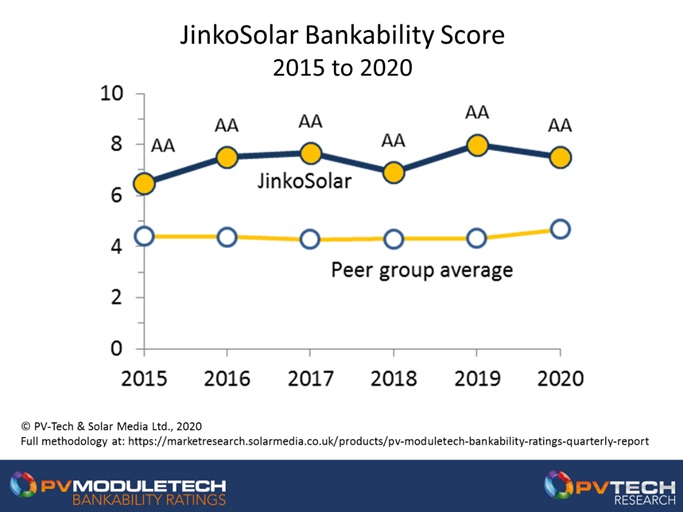 As we move forward, all the signs are that Jinko is intent on continuing its module-supply focus. As we look across the other module suppliers in the top rating groups, this is becoming an anomaly with other companies searching eagerly for new revenue streams, such as Canadian Solar’s new energy storage business unit formation.

Therefore, it all comes down to cost structure, more so than efficiency improvements, since efficiency gains are slow-and-steady and controllable: costs have other external drivers and can move rapidly downwards during oversupply.

Polysilicon costs can happily trend marginally above Daqo’s production costs these days. However, the key issue for Jinko now is keeping its in-house ingot-to-cell prices as low as possible, or as close to values in China being achieved by LONGi (wafers) and Tongwei (cells). When one looks at where margin can still come out, it is at the ingot/wafer stages. Therefore, it seems reasonable to conclude that over the next 12-18 months, Jinko’s cost focus will be on in-house ingot/wafer reductions.

The worse-case scenario of course is simply to hold back ongoing capacity expansion for a while and buy in wafers and cells that are in oversupply in China today and likely for the rest of this year. This is a strategy that companies such as Jinko and Canadian Solar have relied upon expertly for some time.

The answers here will not be known for three months, despite Jinko reporting on Q1’20 performance next week. The cost stack trends will be more apparent when Q2’20 numbers are known in September 2020. However, next week may shine some light on slowing down planned 2020 new capacity ramping, in particular if the spot market is just too attractive today for buying in cells and wafers.

The next release of the PV ModuleTech Bankability Ratings Quarterly report comes out next month (July 2020). To book a demo to understand more about the report format, analysis and features, please complete your details at the link on the report webpage here.