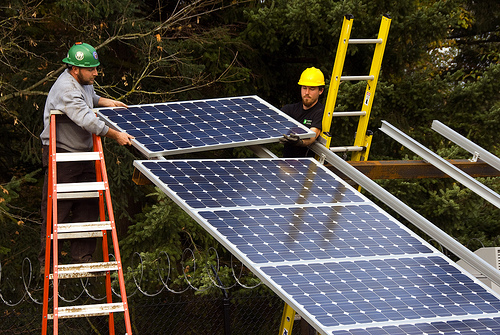 Three months of marginal job creation means nearly 500,000 clean energy workers in the US remain unemployed as the sector struggles to recover from the impact of COVID-19.

Just 24,000 positions were added in July and August, leaving 14% of the clean energy sector’s pre-coronavirus workforce unemployed as the industry nears the traditionally slow winter months.

The sector, therefore, faces a long road to recovery, according to the latest analysis of federal unemployment filings prepared for E2 (Environmental Entrepreneurs), E4TheFuture and the American Council on Renewable Energy (ACORE) by BW Research Partnership.

The report notes that with federal ‘Paycheck Protection Program’ (PPP) funds “all but exhausted”, more layoffs could be imminent without congressional action.

“Our ask to Congress is a simple one: we need temporary refundability of renewable energy tax credits and a delay in their scheduled phasedown. Enacting these commonsense emergency relief measures into law would get these hard-working Americans back on the job and help power our nation’s economic recovery.”

States with most clean energy job losses since pre-COVID

Before COVID-19 hit, nearly 3.4 million Americans worked in clean energy occupations, including renewable energy, energy efficiency, grid modernisation, clean vehicles and fuels. According to the report, that figure is three times the number of Americans working in fossil fuels.

More than 40 states continue to suffer double-digit unemployment in clean energy, with seven states seeing clean energy unemployment at 20% or more. Georgia continues to suffer more than 31% unemployment in clean energy, followed by Kentucky at nearly 29%. In August, Massachusetts led all states with the highest percentage growth in its workforce at 0.9%, while California had the largest total increase in jobs with 3,100 positions added (0.7%). Just two states (New York and California) gained over 1,000 jobs, while ten states added fewer than 50 jobs.

Phil Jordan, principal at BW Research Partnership, warned that despite the widespread economic reopening across the US, most of the nearly 500,000 job losses “are at serious risk of becoming permanent”.

6 June 2023
Join us in Napa to unlock the key to reliable PV module supply to the U.S. market in 2023 & 2024. We'll also be gathering the main players in the US solar market for some wine tasting!
american council on renewable energy, covid-19, covid-19 recovery, e2, employment, jobs, policy, renewables, us