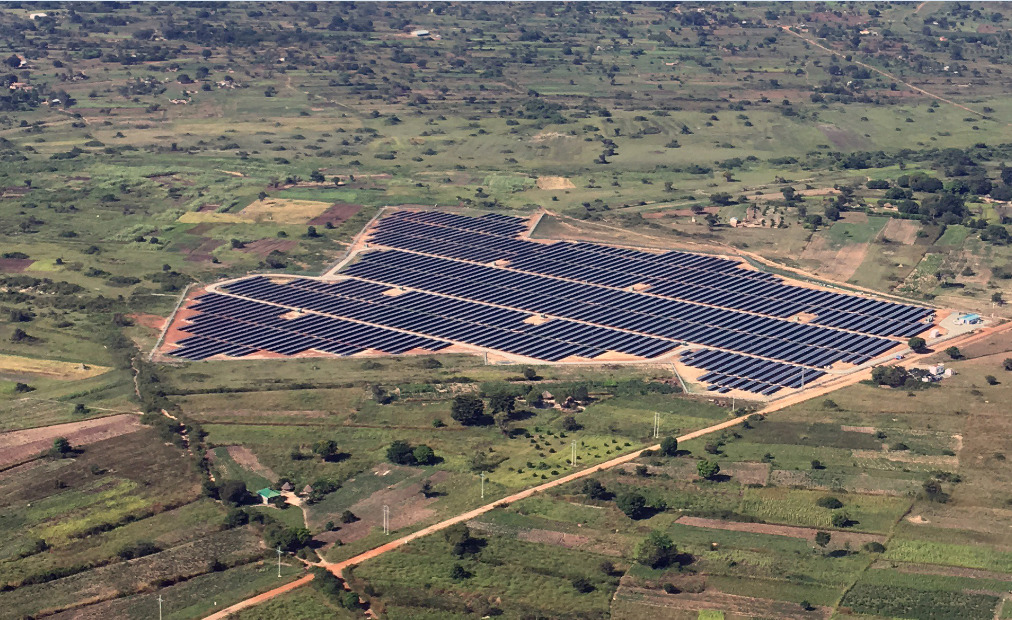 After years of unconverted pipelines, stale financing and cost barriers, utility-scale solar PV in Africa has started to spring up across the continent. The worldwide decline in equipment prices has of course been a pivotal influence, but Sub-Saharan Africa also now hosts a number of support schemes backed by development banks that are driving significant project sizes in a number of countries. Some have suggested that initiatives such as the World Bank’s Scaling Solar programme favour big international players and can only achieve low prices through a generous debt scheme. Thus, one question is what kind of long-term solar industry will be left in the wake of such programmes and for whom? It’s also clear that Africa will have to move even faster than other markets in terms of matching the upgrade of transmission networks to the addition of renewables, since most countries have very small total power capacities and weak grids.

Two years ago, PV Tech Power wrote about ‘flickers of progress’ in West Africa specifically, but project sizes were limited to 20MW at most and despite some momen­tum, the pace was still regarded as slower than expected. Fast-forward to Q4 2017 and the market kicked off in a convinc­ing way across many parts of Africa, with project completions, major tenders and long-term support polices being regularly announced all the way up to the spring of 2018. This period saw a deluge of headlines from the African continent.

“Large-scale solar build-out in sub-Saharan Africa will continue to be driven by multilateral programmes in the short to medium term,” says Silvia Macri, senior research analyst at IHS Markit. “Therefore I would keep an eye on those countries where tenders have already been announced under any of those schemes. On the list we can certainly mention Zambia, Senegal and Ethiopia and likely other countries will soon follow.

“This year projects were announced in Burkina Faso, Mozambique, Namibia, Cameroon, to name a few, which could hint to a domino effect of positive tender results elsewhere in the region. Outside of these programmes, it will be interest­ing to see what happens in Kenya. The former signed a number of solar PPAs at a relatively high feed-in tariff level, before an announced shift to a tender mecha­nism. Nigeria has a huge potential but no progress has been made with large-scale PPAs; definitely another market to follow closely,” adds Macri.

“It’s mostly the price which is driving this development, together with a better trust in the technology and the possibility to have available capacities very fast in a context of impending need for power,” says Karim Megherbi, director of origination, West Africa and Central Asia, at developer Access Power. “The renewable energy policies in most of the countries have existed for maybe 10 years including commitments to green energy for quite some time. But they were just waiting somehow for the right moment to develop on the larger scale with these technologies and it’s the price and the quick implementation that enables them to do that. There is also a huge potential to target remote areas, where a large demand subsists, and developers are more and more prepared to address this market.”

However, Megherbi notes that most African power markets on a national basis are very small, with the likes of Burkina Faso and Benin having roughly just 250-350MW each, for example. There are very few gigawatt markets, although Nigeria with 5-7GW of available capacity is a standout. This is why governments and institutions need to not just think about solar but also about the transmis­sion infrastructure at as early a stage as possible.

Solar prices reached new lows for the region this year with Engie and Meridiam winning 60MW(AC) of projects in Senegal with sub-€4 cent (~US$0.048) per unit tariffs. However, it should be noted that this was part of the World Bank’s Scaling Solar programme, which has a highly favourable debt financing mechanism. West Africa’s largest project standing at 33MW also came online in Burkina Faso, while financing was also secured for a 50MW project in Mali. Similar announce­ments have been plentiful, alongside regular Scaling Solar tender results in select countries.

Many African governments are now willing to organise tenders and to add solar to the energy matrix, but in decid­ing which regions hold the most promise, Megherbi says there are two questions: which countries have grid potential and which countries are actually going to take action?

For example, big markets in Nigeria and Kenya have huge potential but the fastest moving markets are in smaller countries right now such as in Senegal.

Megherbi picks out West Africa as having a regional trend in favour of solar, since Ghana, Mali, Burkina Faso and Senegal are all discussing the possibility of interconnection.

“You have a kind of homogenous trend here,” adds Megherbi, “that you may not have actually in the other regions of sub-Saharan Africa.”

He also cites attractive individual countries including Ethiopia, Zambia and Malawi, where tenders have been organ­ised. However, he is quick to play down any hope of massive scale development in the region.

“There are a lot of markets now which are clearly trying to attract international investors and to develop megawatts of projects,” he says. “At the same time, if you put together all the markets of sub-Saharan Africa, it still remains not a huge market and mostly because you still will have the constraint on the grid and the fact that all markets on an individual basis would represent a few hundred megawatts maximum. Only in Nigeria and South Africa can you have a market on a gigawatt basis. The rest is a few hundred megawatts and sometimes it’s a few tenths of a megawatt. So unless there is a regional approach there will be a very fragmented market.”

The Sahel region, stretching across the south of the Sahara Desert, had a dramatic boost with this year’s announcement that the African Development Bank (AfDB) was targeting 10GW of solar installations by 2020 in that region, However, there are a number of other ventures driving solar across sub-Saharan Africa.

German development bank KfW has been supporting government tender­ing through its ‘GET FiT’ programme. For example, the government of Zambia has issued a request for qualification for up to 100MW of solar under the first round of the scheme. The capacity will become available via a reverse bid, competitive auction process. ‘GET FiT’ offers a stand­ardised set of bankable legal documents, risk mitigation, procurement and financ­ing support as well as technical assistance for solar PV grid integration.

The Zambian programme followed the successful implementation of the GET FiT Uganda programme, which spurred investment in over 170MW of renewable energy projects.

The West Africa Clean Energy Corridor (WACEC), aimed at accelerating the deployment of utility-scale renewable energy into the region, was also launched last year. The plans, led by Ecowas Centre for Renewable Energy and Energy Efficiency (ECREEE), seek to harness the benefits of hydro, solar, wind and biomass resources across the region whilst also easing the strain on the grid through trading of power between countries.

Perhaps the most widely publicised support scheme has been the World Bank’s ‘Scaling Solar’ programme, led by the International Finance Corpora­tion (IFC). It has drawn record low prices and driven the largest scale projects in sub-Saharan Africa.

The aim of the programme is to make privately funded grid-connected solar projects operational within two years at competitive tariffs. Low tariffs are also helped by the tenders having pre-arranged financing attached to them. IFC provides 30% of the debt financing on a concessional basis, which explains the level of prices reached with this programme, together with the fact that the development risks are largely reduced.

Some have complained that the programme is conducive only to big international companies with large-scale portfolios, since the focus is on low costs and tariffs. Nevertheless, the same commentators also believe that it is still a major positive for so many megawatts to be developed while attracting investors, helping governments to learn, focusing competition and lowering prices. The concern is whether an industry can be built off the back of this programme, but all agree that Scaling Solar has sent a signal to the market and kicked off large-scale development where there was little before.

“The main concern is financing, which could affect any large infrastructural project in sub-Saharan Africa, not just solar,” says Macri. “For the industry, the question is whether projects will contin­ue to need external financial support at low interest rates or private investments could take off with the backing of local commercial funds. Grid integration could also raise some concern in the future but more in the longer term and governments will have time to consider grid expansion projects to allocate more renewables into the mix.”

However, while financing has been cited as a key barrier countless times in recent years, Megherbi claims it was never really an issue. Far more hindering was the lack of appropriate legislation and contract structures. Nowadays both governments and developers can offer the appropriate structures to attract the financing of the banks. The main issue now is whether governments will hit their limit in terms of the number of PPAs that they are willing to back with sovereign guarantees

“The grid is going to be the main challenge,” adds Megherbi. “And this is going to come sooner than we expect.”

Some countries are already struggling to absorb project capacities of 20-30MW. Upgrading grid infrastructure also takes some years, so if not acted upon soon, the whole solar development will be slowed down, says Megherbi. The AfDB is showing good intent on this area by making grid infrastructure upgrades a fundamental part of its 10GW solar deployment mission in the Sahel.

For the region to continue its large-scale PV progress, it’s clear that support programmes will continue to be critical in the near future.

“The large multilateral programmes are key drivers but in the short term, progress will likely be made in small steps,” says Macri. “Sub-Saharan African countries still lack the necessary infrastructure to allocate large capacities and the pace at which solar grows will also depend on the implementation of programmes to facilitate grid integration.”

Looking further ahead, there may be opportunities for hybrid technologies. The World Bank plans to make energy storage an integral part of its Scaling Solar programme, which until now has been focused purely on facilitating large-scale solar tendering, although this may not be entirely focused on Africa.