The British comedian Vic Reeves said: “88.2% of statistics are made up.”

With that in mind, I’m not going to present the findings of this endeavour as anything more quantitative or rigorous than a thought exercise.

Outside of the United States, the majority of people working in the solar industry consider the Section 201 case to be “crazy”. Proponents of trade cases in other geographies have a softer view but in either case, their opinions are moot.

At SPI, where 20,000 solar professionals gathered, the majority from the US, opinion is more important, although of no consequence to the rule of law of course.

I decided to conduct a very unscientific straw poll; two paper cups, one marked ‘for’ and one marked ‘against’, and set out to attempt to take the pulse on the exhibition floor. The results were borderline unanimous, and occassionally profane, but it is important to assess that critically and put it in the context of the Section 201 process, which, is not a popularity contest. 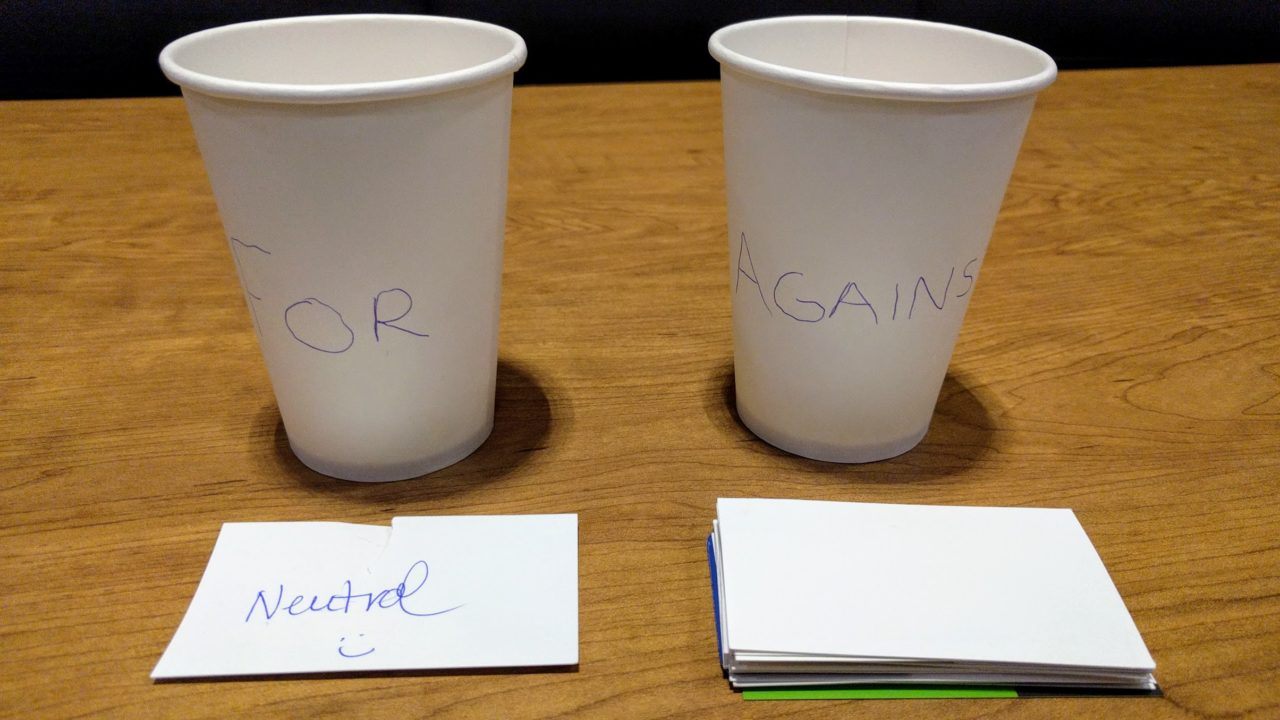 The results are in

Let’s get this out of the way. It might not be a surprise that all but one company I approached said they were against the trade case. These represented domestic companies from the materials, engineering, balance of systems, power electronics and power components sectors. The only other vote was a determined “neutral”. I tried to get them to pick one side or the other but they insisted. I did not go to the SolarWorld Americas stand but we can definitely count them as a ‘for’.

In the interest of fairness I approached several other companies with module and/or cell capacity in the US and not a single one would openly or publicly back the case. They stand to benefit but as one observer noted “why would they antagonise their customers by supporting it?”

A valid point and perhaps it alludes to one opponents of the case wouldn’t want to, but should, consider. If Suniva gets everything it wants, there will be beneficiaries but the last thing they will do is open themselves up to any negative feeling by publicly backing the case. First Solar has stayed very quiet on the subject answering questions from analysts, and me, about how it might impact their manufacturing plans but very carefully avoiding any judgement on the merits of the case.

At the time of writing its shares were worth US$48.85. Deutsche Bank suggests this could increase to as much as US$110 in the event of an injury finding on Friday.

The expectation from investment bank research teams, namely ROTH and Deutsche Bank, as well as lawyers close to this case and with experience of many others, is that the vote on injury will find that imports have indeed been the major factor in stifling domestic US solar manufacturing.

This will indeed leave the majority of the downstream solar industry, including balance of systems manufacturers, deeply unhappy. But the rules are clear and regardless of your views on the petitioners’ motivations, it’s only the rules that matter.

Beyond the injury part of the case, and into the search for appropriate remedies, things become (even) more complex.

“Given the potential harm that more expensive panels could cause to demand and jobs in the US solar industry, finding a suitable remedy may be a key weakness of the case. Additionally, the petitioner is required to present an adjustment plan detailing how the company plans to survive in a competitive environment after the safeguard period ends. This could be challenging given the financial condition and competitive positioning of the petitioners. Without a credible plan, it may be difficult to justify a remedy that could result in developer job losses.”

With regards to the adjustment plan, there is some debate over whether this is an obligation for any 201 case or a prerequisite for any successful case. Either way, PV Tech expects more detail on these plans in the coming weeks. On November 13, following a hearing in October, the ITC would recommend remedies to the President.

Now, President Trump has reportedly told staff to “bring me tariffs”. It’s no coincidence that ten years without any 201 cases, the nuclear option when it comes to trade remedies, several have come at once. But politically, the solar case could be the wrong one to make a statement on US jobs with given the undoubted potential for net job losses in the sector.

In deciding its remedy options, the ITC is duty bound to consider the possible impacts across the entire sector over the long term.  A short, sharp boon for domestic manufacturing could be viewed as jeopardising jobs and the ongoing deployment of a technology Trump’s own energy department recently appeared to accept can have a positive impact on consumers. And consumers will be part of the ITC’s considerations. Looking beyond the injury hearing, the question for the ITC is whether 201 remedies would represent mutually assured destruction for the US solar sector, rather than a tactical first strike.

6 June 2023
Join us in Napa to unlock the key to reliable PV module supply to the U.S. market in 2023 & 2024. We'll also be gathering the main players in the US solar market for some wine tasting!
first solar, section 201, solarworld americas, spi 2017, suniva, trade dispute, trade tariffs, us, usa